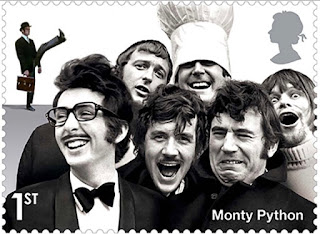 🇬🇧 I assume that we are only a few weeks away from knowing about some of the subjects which Royal Mail plans to feature in its 2019 new issue programme. What will they be? I do not know but I have reproduced screen shots below from Blog 923 which talked about the survey put out in March 2017 which sought collectors' opinions about which subjects should be depicted on the new Royal Mail stamps of 2019. One can only speculate that most new issues will be extracted from this list though one wonders if a Europa set featuring the highly popular theme of National Birds might be one of those subjects which will be featured that does not appear in the lists. 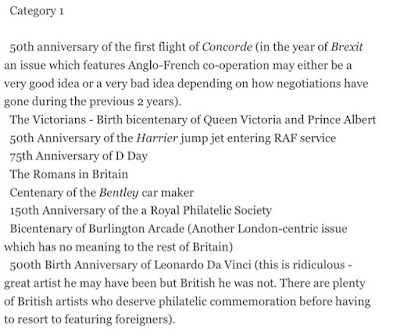 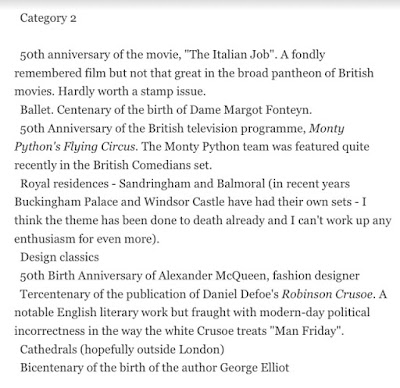 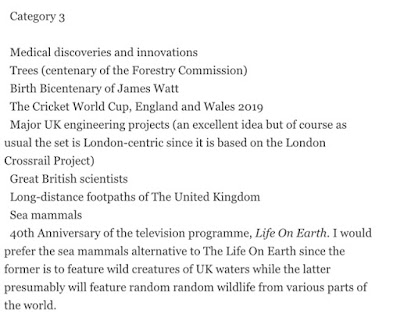 My choice of subjects was summarised in the following paragraph:- 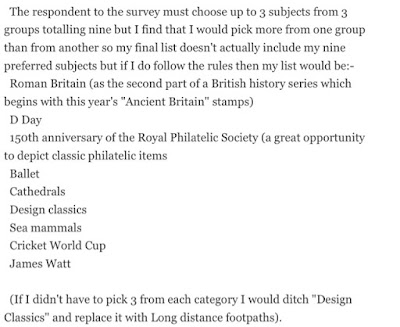 We already know of course that the 150th anniversary of the Royal Philatelic Society is to be commemorated by an issue on 15 January made up of a miniature sheet containing 6 stamps each depicting a classic British stamp (as speculated about in the paragraph above where I list my preferred subjects). Although I prefer the sea mammals as a subject, given Royal Mail's predilection for 'blockbuster' television programmes featuring on new stamp issues, one can not help but expect that there will be an issue featuring David Attenborough's landmark series, Life On Earth.
I hope that there is not a medical issue as we are only a couple of years away from the Centenary of the discovery of insulin which would be a perfect opportunity to commemorate British medical discoveries particularly as the Scot, Professor John Macleod, shared the Nobel Prize for Medicine for his role in its discovery with the Canadian, Frederick Banting.
A combination of the Defoe and George Elliot anniversaries could make a good Literary anniversaries issue or a Notable Persons' issue could be made up of those two writers plus stamps commemorating Dame Margot Fonteyn, Alexander McQueen, James Watt and doubtless there are others who could make the set up to 8 or 10 as well as ensuring a race, gender etc balance which is always necessary today with modern stamp issues.
The Harrier jump jet and Concorde themes could make up an aviation issue but as I've written before, if artists are to be commemorated on British stamps then, in true Brexit fashion, let them be British artists - we have enough of them though one must admit that the art work featured on the Contemporary Art stamps released this year hardly does credit to British art. I suppose if Royal Mail really does feel it can't bring itself not to commemorate Leonardo Da Vinci then his art work in British collections could be used as the basis of designs for Christmas stamps.
So, we'll see what is announced unless Royal Mail's tedious embargoing of news goes even further than it has so far.