1230. Ambazonia - Will It Be A New Philatelic Entity In A Commonwealth Stamp Collection?

The newest country in the world is South Sudan. It achieved independence on 9 July 2011 from Sudan which itself, having been part of the British Empire, had obtained its freedom from joint Anglo-Egyptian rule on 1 January 1956. Sudan did not join The Commonwealth unlike most other territories which received their independence from Great Britain but it is often written that Sudan has subsequently applied to join the organisation though I'm not sure that that is strictly accurate. Sudan has a fine history of stamp issues during the colonial period and a highly conservative approach to new issues since independence.

Even if Sudan had applied to join The Commonwealth it is unlikely that it would ever be accepted for membership given the way its current government rules the country. South Sudan has applied to join The Commonwealth but stands little chance of being admitted while civil war rages in the country. South Sudan has issued very few stamps since independence and some of those were gifts from The People's Republic Of China. 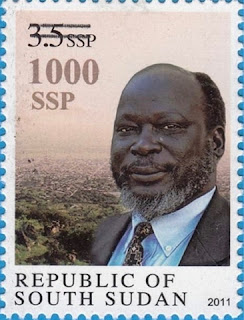 Since 2011 conflicts have raged around the world and ephemeral secessionist states have emerged and either established or not established postal services which would have warranted the issue of postage stamps. It was once claimed that the appalling Islamic State, run by men of the most vicious and cruel of natures, had established a postal service though obviously given its isolation, for internal post only. Imagine how the addition of the stamps of such a territory to one's stamp album would soil a collection.
It has always been a rule that if a country wishes to establish its credentials as a sovereign state then it should have a national flag and stamps with its name printed on them. To justify the production of postage stamps the existence of a working mail service in that country is rather useful. However there is at least one de facto independent state, the former British colony of Somaliland, which does not have a working postal service, either internal or external, and consequently has not issued any postage stamps despite the country having declared its independent status as long ago as 1991. There have been a large number of bogus products appearing on the philatelic market with the name of Somaliland inscribed on them since 1991 including the preposterous overprints on British Machin Head stamps (see Blog of 10 July 2010) and these bogus items continue to appear even in 2018 with a pair of miniature sheets being sold to commemorate the FIFA World Cup Finals in Russia. 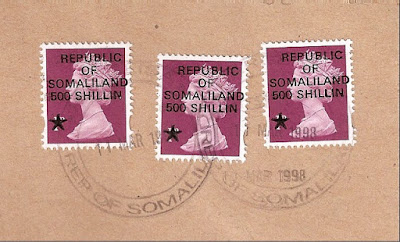 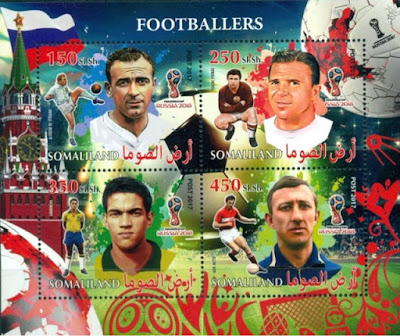 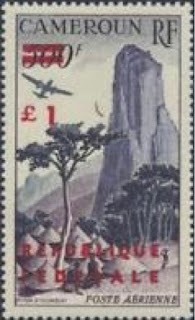 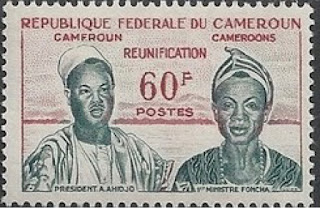 In February 1984, the President of Cameroon, Paul Biya, changed the country's name from the United Republic of Cameroon to Republic of Cameroon which Biya claimed affirmed Cameroon's political maturity but which was greeted with dismay in the Anglophone former Southern Cameroons. There it was feared that Biya was attempting to crush the Anglophone identity and fully assimilate it while another group there claimed that by restoring the name of the former Francophone state Biya had led a Francophone secession from the republic in which the 2 communities were united.
In a memorandum dated 20 March 1985, an eminent Anglophone lawyer Fon Gorji Dinka claimed that Biya's government was unconstitutional and that the former Southern Cameroons should be an independent state called Ambazonia. The name derived from that of the settlement for released slaves which had been founded at Ambas Bay by the British Baptist Missionary Society on 10 August 1858. Ambas Bay was declared a British Protectorate on 19 July 1884 and was subordinated to the Oil Rivers Protectorate. In 1886 the Baptist Missionary Society agreed to turn over its posts to the Basel Evangelical Missionary Society and on 28 May 1887 The United Kingdom ceded Ambas Bay to Germany and it became part of the German Colony of Kamerun. During the First World War Kamerun was occupied by British and French troops and subsequently divided up as League Of Nation Mandates and then United Nations Trust Territories between the two countries with the Ambas Bay area once more falling under British control.
The capital of Ambas Bay Protectorate was Victoria, now known as Limbe. A view of the town was depicted on the 1953 - 58 £2/6d definitive stamp of Nigeria in which Southern Cameroons was then included and the same design was then used for a 3d stamp issued in 1958 which commemorated the centenary of the founding of Victoria. The 1953 2/6d stamp was reissued in 1960 with the overprint 'CAMEROONS U.K.T.T.' (UKTT standing for United Kingdom Trust Territory) for use in the Southern Cameroons until it was unified with the former French Cameroon in October 1961. 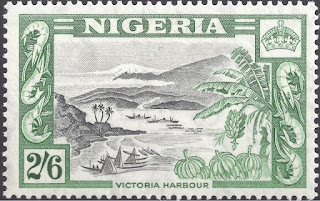 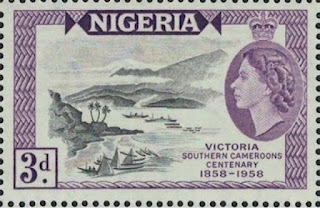 In the following years various political and legal actions took place to establish Amazonia and Cameroon as separate entities leading eventually to a Declaration of Independence by Southern Cameroons on 1 October 2017 by which the territory called itself The Federal Republic Of Ambazonia. Since then, there have been clashes, sometimes violent, between some residents in the Anglophone areas and government forces which have even resulted in deaths. The Declaration of Independence has not received any international recognition and President Biya maintains a firm grip on Cameroon but the Anglophone opposition maintain that it has established an Ambazonia Interim Government. Cameroon as a single entity remains a member of The Commonwealth with a remarkably conservative philatelic new issue programme.
Ambazonia has chosen for itself one of those prerequisites of an independent state - a national flag - in fact I'm not entire clear what it is as 2 different flags can be found on different websites - it may be that the one which features a bird has been replaced by the second design which is called 'The new glory' and depicts a red canton with an eight pointed yellow star on it whilst the rest of the flag is a pale blue compared with the previous blue and white stripes. At any rate Ambazonia has a flag and so, one asks oneself, will it soon have postage stamps? After all, as I wrote above, two things are required to assert national sovereignty - a flag and some stamps. It isn't really necessary to have a postal service for a country, or a philatelic agency, to issue stamps with the country's name printed on them (despite Somaliland's admirable and honest approach to the subject) and they do provide good international publicity for the state's claim to exist so there seems no reason why someone in the Ambazonia interim government won't eventually come up with the idea of issuing 'postage stamps' to publicise the country and, as a side benefit, act as a source of income for somebody or the other. So look out for the stamps of a new country - Ambazonia - to appear in the future and remember, you read it here first! 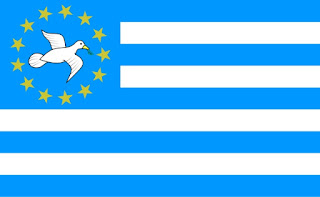