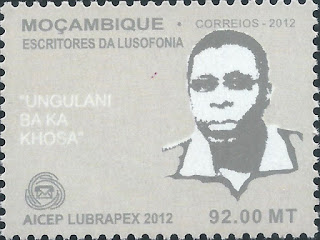 🇲🇿 We always suspected that they were out there somewhere and now they have come to the surface. What? you ask. Answer:- REAL postage stamps from Correios Moçambique, the postal service of Mozambique.
For 10 years Stamperija has been pouring out literally thousands of paraphilatelic items with the permission of the Mozambique postal authorities but there has been no real evidence of these 'stamps' actually having been made available to ordinary post offices for use as postage stamps on genuine mail by the post-sending public of Mozambique.
Now an auction site dealer is offering for sale a number of items which have clearly been produced by Correios Mocambique for postal usage but of which I certainly have not been aware previously.
The first, shown above, has been reported in this Blog previously but only in a used state on cover. Furthermore, the item which I possess has a completely different shade - much browner - than the item being offered for sale. The stamp commemorates the Lubrapex Philatelic exhibition of 2012 and is part of a series issued by Lusophone territories for the event on the subject of writers in the Portuguese language. Rating:- ****.
Next there is another single stamp issue from 2013 which commemorates the World Vision organisation and the dates on it (1983 - 2013) suggest to me that the issue commemorates the 30th anniversary of the organisation's work in Mozambique. As with all of these issues the art used in the design is rather naive and the printing is local and not of the highest quality but the stamp is interesting and attractive. Rating:- *****. 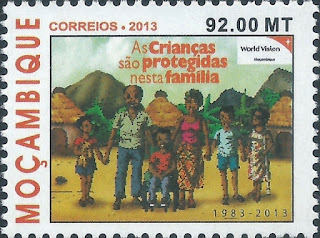 A single stamp of 2015 is part of a Lusophone omnibus which commemorates the 25th anniversary of the International Association of Portuguese Speakers. Stamps from from other Lusophone countries which participated in this omnibus, particularly Brazil and Portugal, are very familiar but this is the first time I have seen the Mozambique version being offered for sale. Rating:- *****. 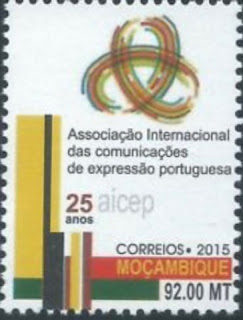 There is a second World Vision stamp which was released in 2017 on the subject of Ending of  violence against children. Not in itself a great design but a necessary addition to a modern Mozambique collection. Rating:- ****. 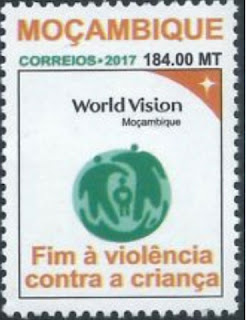 Finally, the same dealer is selling another one of those difficult-to-find surcharges which were issued between 1998 and 2005. This is a 1998 issue with a surcharge applied of 3000MT and 3 horizontal stars. The value is inverted on this stamp which may explain why the asking price is £106.53p.
The price of all the above stamps is rather high but it is difficult to know the value of these stamps which have previously been unattainable and it all really depends on whether or not more come on to the market. 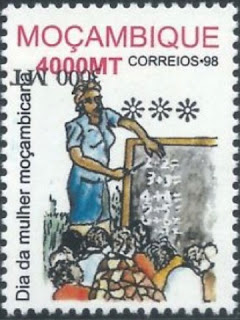 🇱🇹 And so from a postal administration which seems to have dropped Stamperija to one which allows that philatelic agency to issue enormous numbers of paraphilatelic items in its name every year. There are yet more items with the name of Sierra Leone printed on them and they take the usual form of 'sheetlets' each containing 4 different stamps with accompanying single stamp miniature sheets. The featured subjects this time are:- 80th anniversary of the death of Ataturk, 50th Birthday of King Philip VI of Spain, Fish, Lighthouses, Tortoises, High speed trains, 5th Year of Pope Francis' pontificate, 55th Birthday of Garry Kasparov, 205th anniversary of the birth of Giuseppe Verdi and 70th anniversary of the assassination of Mahatma Gandhi. Rating:- 0.
The stated 'date of issue' is 30 January 2018. 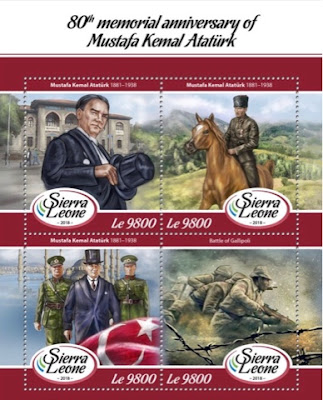 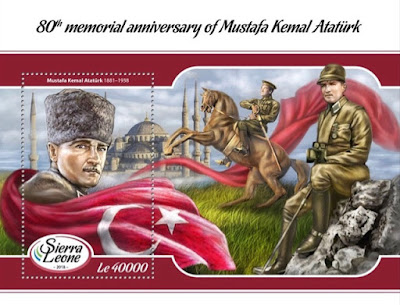 🇬🇭 On the latest price list of Bombay Stamps, an excellent dealer, are 4 stamps and 1 miniature sheet issued, I presume, by IGPC in the name of Ghana as its 2017 Christmas issue. I have not yet seen them listed on the IGPC website and have no idea if they actually got to be used on Christmas mail in Ghana. The designs, Christmas decorations, are tremendously unappealing and have no specific relevance to Ghana. Rating:- *. 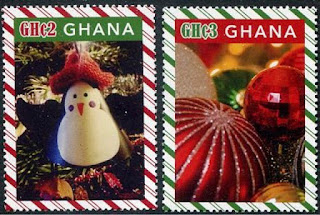 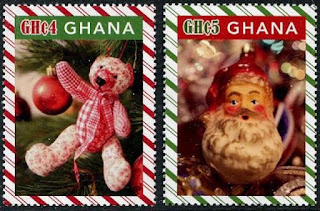 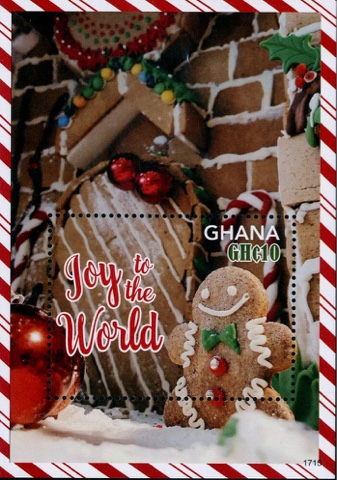