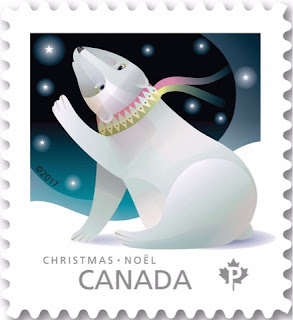 🇨🇦 I think my favourite Christmas stamps of the year are likely to be the charming new set from Canada Post. The issue is made up of 3 self-adhesive "secular" design stamps from booklets with a gummed miniature sheet and 1 self-adhesive "religiious" design stamp from booklets of 20.
This is a lovely set with a well chosen "Old Master" painting featured on one of the "P" rate stamps and 3 charming depictions of Canadian animals in a Christmas setting.
The issue was released on 3 November 2017 and designed by Helene L'Heureux from illustrations by Christian Beauregard (secular stamps) and Louis Methé (religious design).
The 'P' value stamps are issued in booklets of 20 stamps and the $1.20c and $2.50c are issued in booklets of 6. Rating:- *****. 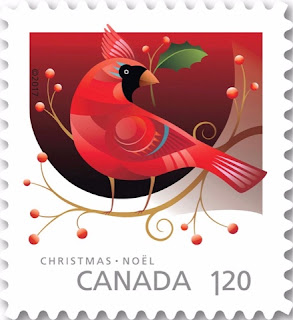 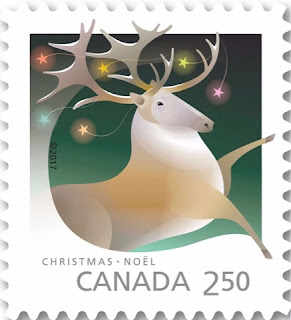 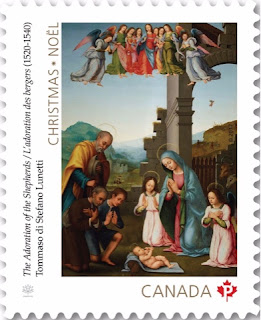 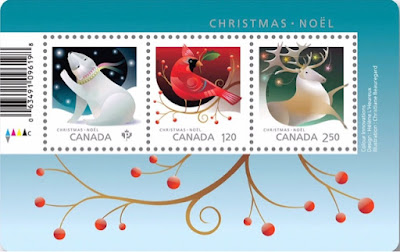 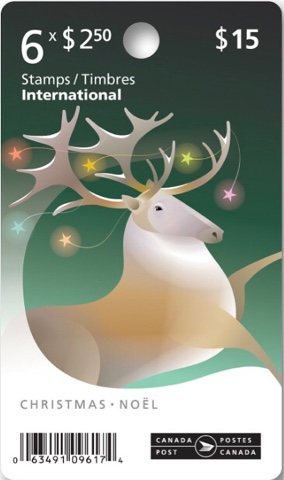 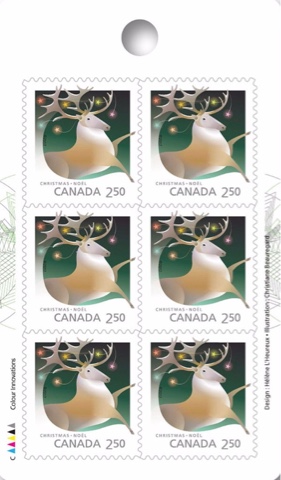 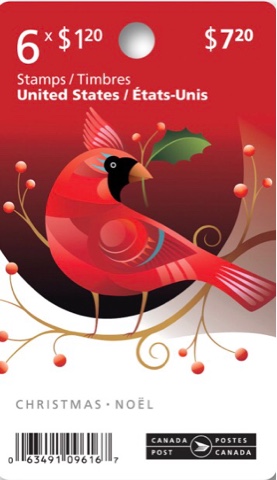 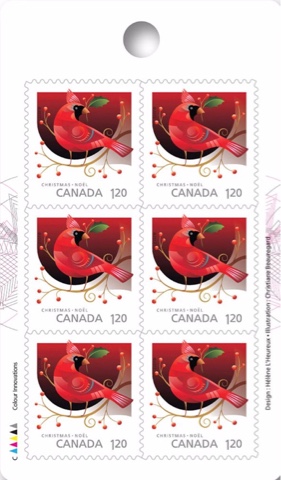 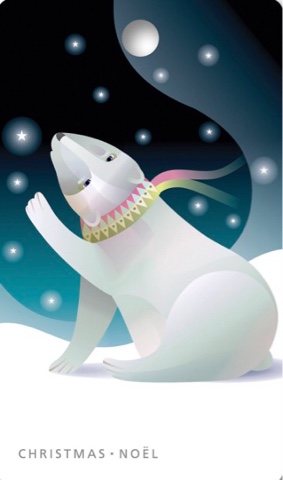 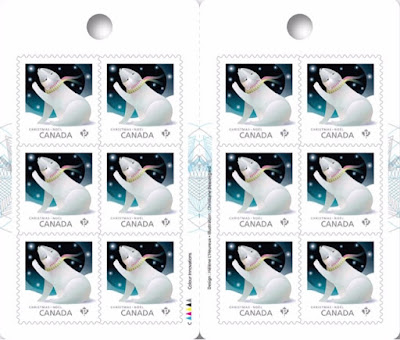 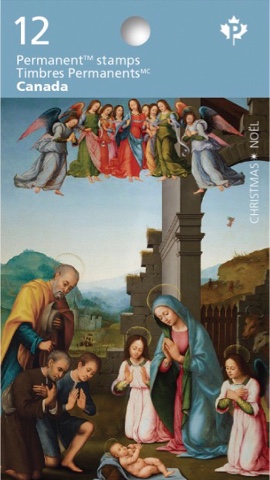 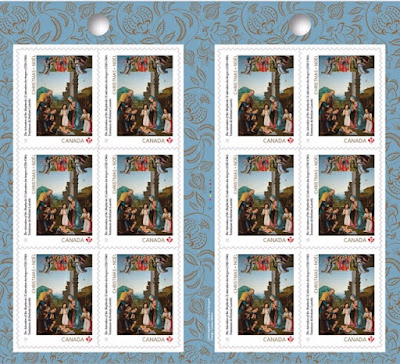 🇬🇩 The names of a number of countries continue to be dragged through the mud when it comes to their philatelic reputation and few fare worse than Grenada. The Beijing- and New York-based philatelic agency, IGPC, has issued a single stamp with the name of Grenada printed on it on the subject of Swarovski crystals. I have not seen any details, including a "date of issue", of this item but the subject of the issue clearly has nothing to do with Grenada and presumably amounts to promotional material for the crystal company.
It is shocking the way that those in charge of the Grenada Post Office continue to allow their country's name to be applied to such stuff. For Grenada, it is a national disgrace. Rating:- 0.
Addendum - the date of issue of the Swarovski crystal issue is stated to have been 1 December 2016. 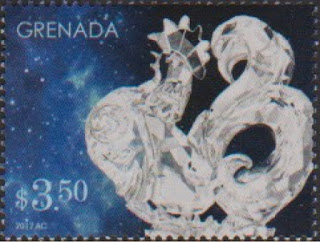 🇮🇳 India Post issued another gargantuan set of stamps on 3 November 2017 on the subject of Indian Cuisine when a sheet of 24 different stamps was released along with 4 miniature sheets each containing 6 different stamps. There are also 4 sheets each containing 4 x 6 different stamps in se-tenant format.
To be honest, I rather like the set and wouldn't mind laying a table and settling down to guzzle myself on some of the delicious-looking foods depicted on the stamps. But rather like a meal with just too much to eat in it I think enough is enough and that India Post has issued far too many stamps this year and really things have to be cut back to make the country's stamps worth bothering with. Rating:- **. 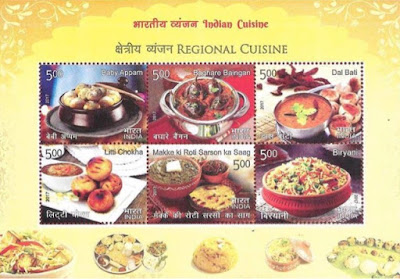 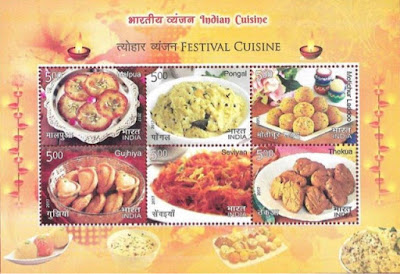 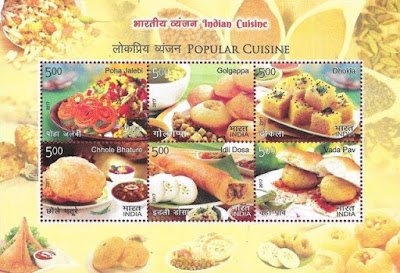 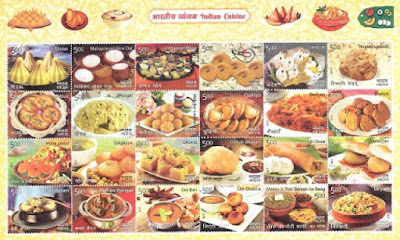 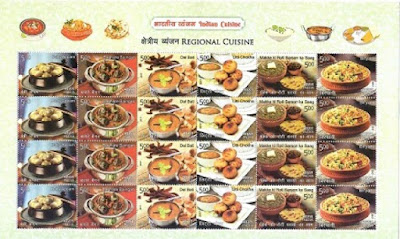 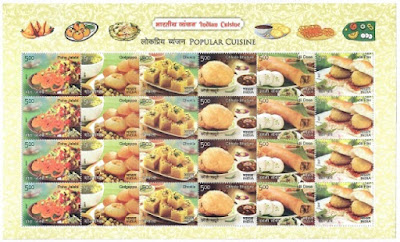 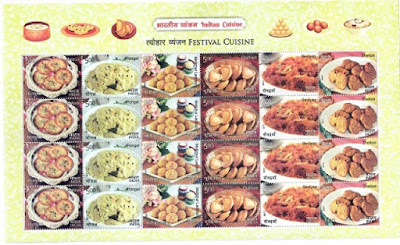 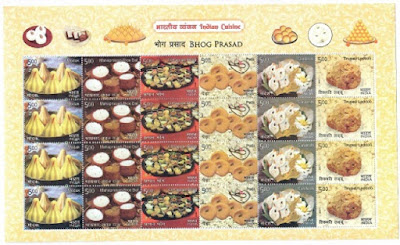