1112. 🇮🇱 Centenary Of The Balfour Declaration. 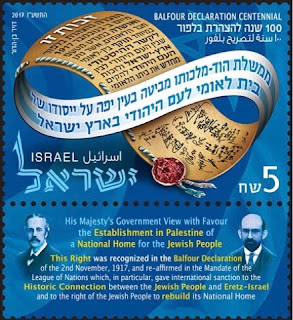 On this date 100 years ago, 2 November 1917, the British Foreign Secretary, Arthur Balfour, issued a statement on behalf of the British government which announced the government's support for the establishment of a "national home for the Jewish people" in the territory called Palestine which was under the control of the Ottoman Empire, one of Britain's enemies during the First World War.
At the same time, British forces were involved in a campaign to support Arab forces in defeating the Turks which would lead to the establishment of states ruled by Arab rulers in the Middle East - notably The Kingdom of Hejaz, established in 1916 under the rule of the Sharif of Mecca, Hussein, Transjordan under the rule of Hussein's son Abdullah and Iraq to be ruled by another son of Hussein, Faisal, who had been expelled from the territory of Syria by the French. After the end of the First World War both Transjordan and Iraq, as well as Palestine itself, were made Mandated Territories of Britain by The League Of Nations.
The Balfour Declaration is a notable event in the history of the British Empire and was one step on the road to the eventual establishment of The State Of Israel in 1948 after Britain had given up its Mandate in Palestine. 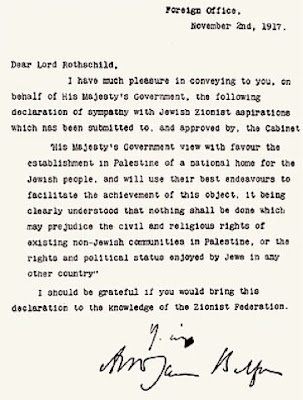 The first stamps of Palestine under British occupation were issued in February 1918 with the inscription "EEF" (Egyptian Expeditionary Force). 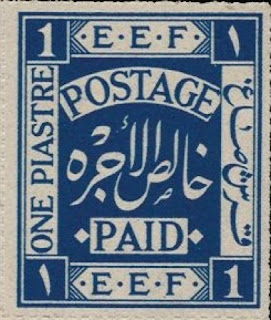 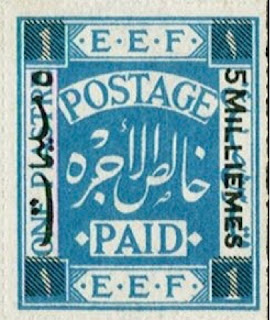 In 1920 Palestine came under civilian administration with the establishment of the Mandate and EEF stamps were overprinted in English, Arabic and Hebrew scripts. On 1 June 1927 pictorial designs were issued for use in the Mandate and these depicted Rachael's Tomb, the Sea of Galilee, the Dome of the Rock, the Tower of David and a mosque in Tiberias and these were in use in the Mandate until April 1948 when post offices closed as the British gave up the Mandate and Israel headed towards becoming an independent state. 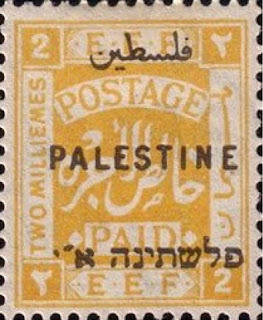 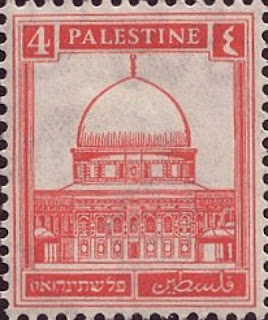 To commemorate the centenary of the Balfour Declaration, the postal service of Israel issued a single stamp (shown at the head of this Blog) on 12 September 2017 with the attached tab including a depiction of Arthur Balfour. The Balfour Declaration is viewed differently by the Israelis and Palestinians but is of immense importance in modern history no matter what one's view of it is and the Centenary stamp tells the story of another chapter in the history of Britain and its effects on the history of the rest of the world.