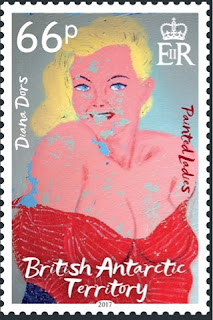 🇬🇧 Pobjoy Stamps/Creative Direction has released news of this year's upcoming issues for the postal service of British Antarctic Territory. It is intended that the stamps will be released in mid-November.
The first of the issues is certainly something, er, different - no blocks of ice, no penguins, no seals but something which amounts to local art. The issue, titled "Painted Ladies", features murals discovered in the bunk room of Bransfield House at Base A in Port Lockroy while conservation of the base was being carried out. The art depicts former film actresses of the 1950s and 1960s including Diana Dors who was the British equivalent of Marilyn Monroe who is frequently depicted on issues put out by agencies such as IGPC and Stamperija. This is a highly original set given the territory it will be issued in and certainly shows that Creative Direction is always thinking of something new to provide to its client territories' loyal stamp collectors.
I'm slightly concerned that with all the hoo hah that is taking place at the moment following the Harvey Weinstein allegations and the accusations being aimed at British members of Parliament about their attitudes to women that the issue of this set could be minsinterpreted but we will see how the issue is greeted. The stamps were designed by United Kingdom Antarctic Heritage Trust and lithographed by Cartor and perforated 13.5. Rating:- ***** (highly original subject). 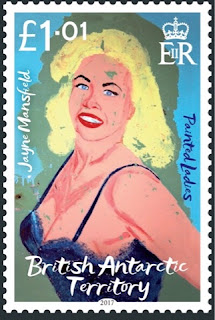 Also due for release in mid-November is a set of 4 stamps and a sheetlet of 9 different stamps on the subject of local Corals. The beautifully chosen photographs used in the designs are by Dan Blackwood, Cath Waller and JR15005/BAS with design work being carried out by Bee Design and printing in lithography by Cartor. The issue is perforated 13.5. Rating:- *****. 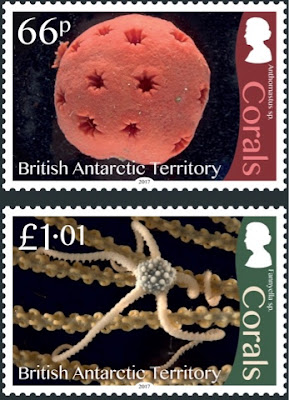 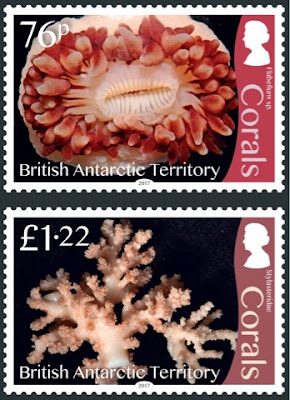 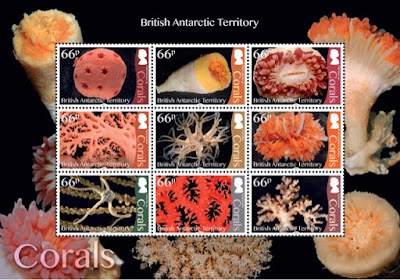 Also to be issued in mid-November is a set of 6 stamps on the subject of Royal Research Ships in the Antarctic. No penguins can be seen in the design! The very attractive and interesting designs were prepared by Andrew Robinson from photographs by the British Antarctic Survey Archives Service. The issue was lithographed by Cartor and perforated 13.5. Rating, again, *****. 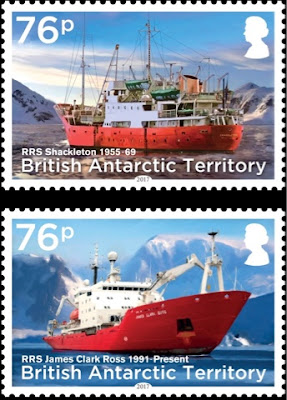 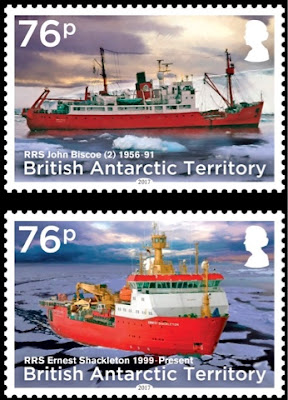 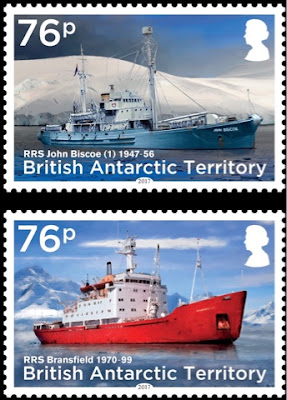 Thanks to Juliet Warner for information about the above 3 issues.

🇧🇹 Below I depict 2 more issues from Bhutan Post but as yet have no details about the stamps.
Late 2017 - Musical instruments of Bhutan - 1 sheetlet of 6 different stamps and 1 miniature sheet:- 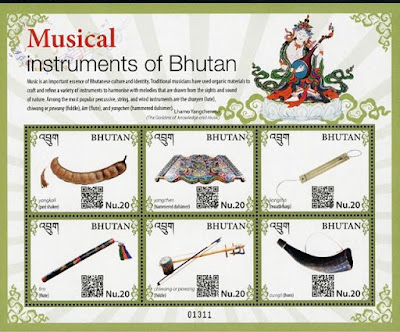 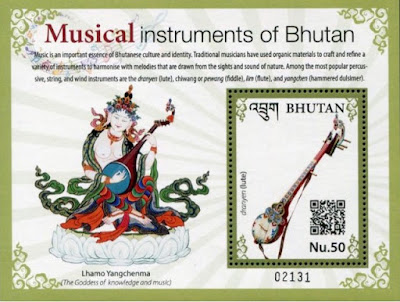 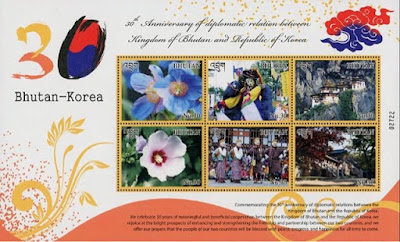 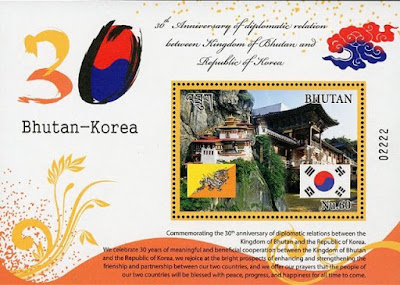 🇬🇧 The Postal Museum in London will sell Royal Mail "Winter Greenery" Post and Go stamps from 13 November 2017 from kiosk A001. These replace the "Poppy" stamps in the 1st Class values and the blue ""Machin Head" stamps in the 2nd Class values. All the stamps will have the added inscription "The Postal Museum". Ian Billings' Norvic Philatelics Blog has indicated that various post offices will sell the Winter Greenery stamps, without additional inscription, with a new code - CL17S - but whether or not the Postal Museum issue will have the new code remains to be seen. Rating:- *.

🇸🇬 Singapore Post will issue 10 gummed Greetings stamps, 10 self-adhesive stamps from booklets and 10 stamps from a self-adhesive sheetlet on 15 November 2017. The issue which features cartoon versions of Singapore's emblem, the Merlion, was designed by Koh Boon Peng and lithographed by Secura and perforated 13. An amusing if rather lightweight issue. Ratings:- ***. 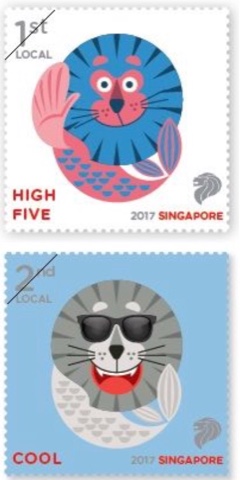 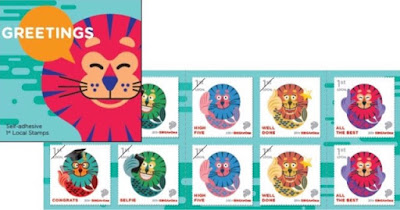 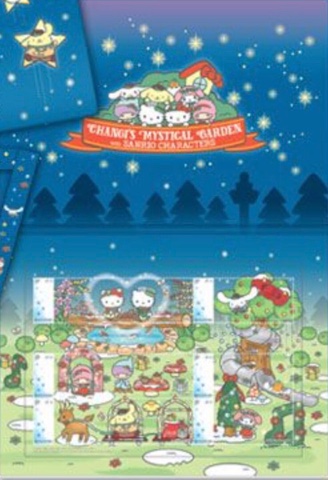 🇸🇱 The latest paraphilatelic products from Stamperija have the name of Sierra Leone printed on them. As usual there are 10 sheetlets each containing 4 different "stamps" and 10 miniature sheets and the featured subjects are:- Dinosaurs, Lighthouses, Dolphins, Bees, Butterflies, Orchids, Prehistoric aquatic animals, Turtles, Fish and Minerals. It is claimed that the "date of issue" was 29 September 2017. Rating:- 0. 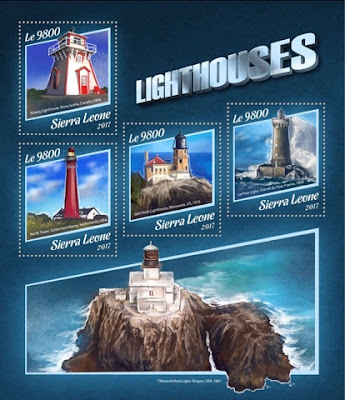 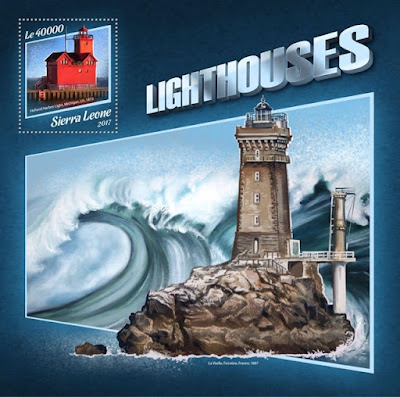