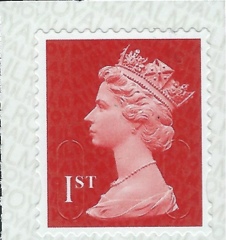 Royal Mail has issued a new definitive as part of its "Mr Men" issue which was let loose on the stamp collecting fraternity on 20 October 2016. Four red 1st class stamps were included in the £3.84p booklet of self-adhesive stamps which also included 2 "Mr. Men" stamps. The Machin definitive was the first release of the 1st class self-adjesive red stamp with security backing paper and code "M16L MCIL".
The 2 "Mr. Men" featured in the booklet are "Mr Happy" and "Mr Tickle".
I was in Stratford-upon-Avon on the day of issue and even though I had decided to resist buying the set of 10 as I find it to be excessive and banal in equal measure, I trotted along to the main post office in Henley Street to see if I could get my hands on one of the booklets in order to obtain the new definitive. Collectors won't be too surprised to read that the very pleasant and helpful counter staff there had to inform me that the booklet was not one of those products which they were stocking locally and I would have to contact the Philatelic Bureau in Edinburgh to obtain the booklet.
What surprised me was the apparent high level of public interest and demand for these stamps which had been mentioned on the BBC television news that morning - in the short time I was at the counter - about 9.30 AM - 3 other people - all quite elderly - came up to the counter and enquired about the stamps and bought some. It has been a long time since I've witnessed such enthusiasm among what seemed to be non-collectors for a new stamp issue and at least 2 of them mentioned that they were buying them to send to their grandchildren.
A lesson here. Stamp collectors, like myself, can be snooty about the dumbing-down of subjects featured on new stamp issues but items featuring various aspects of modern popular culture do seem to appeal to the (older) public who will buy such items not so much, perhaps, for themselves but because they think that the stamps will be enjoyed by their grandchildren. For any stamp-issuing entity a sale is a sale and a source of income. I may not think that these are worthy of issue but the stamp-buying public seem to be keen to obtain them especially if they think that they will be suitable gifts for younger members of their family.
The public's keeness for them is also heightened if the philatelic items have been featured on the television, even if only in a short news bulletin which begs the question of why we don't have any television programmes here about stamps and stamp collecting even though we have numerous programmes on general antique collecting, geneology, house buying, gardening, cooking, eating, sport and numerous other pastimes. 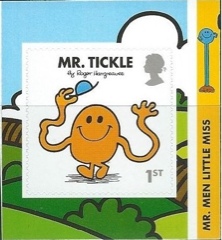 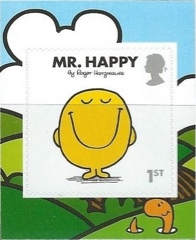 The 6 gummed Christmas stamps issued by the Isle Of Man Post Office which are described in Blog 829 were accompanied by a 45p self-adhesive stamps issued in sheetlets of 25 as depicted below:- 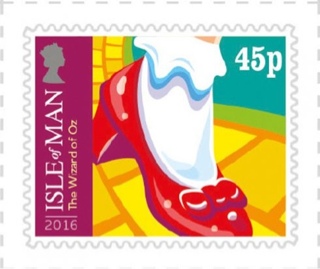 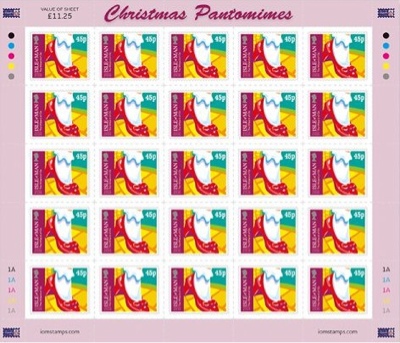 Guernsey Post will issue 6 stamps on 11 November 2016 as its third issue which commemorates the Centenary of the First World War. Each stamp depicts a Guernseyman who served in the Royal Navy during the war. Whilst I appreciate the point that is intended to be made with these stamps I find the designs cluttered and anaemic. Rating:- **. 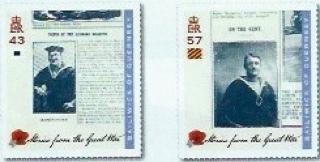 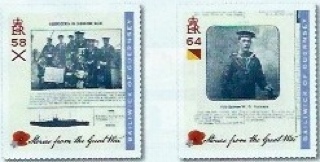 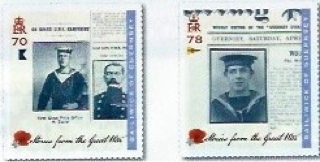 Pos Malaysia reissued the 2015 Trains in Sabah miniature sheet with an additional inscription, "Thailand 2016 32nd Asian International Stamp Exhibition" presumably on the first day of the exhibition which was 10 August 2016. Rating:- ***. 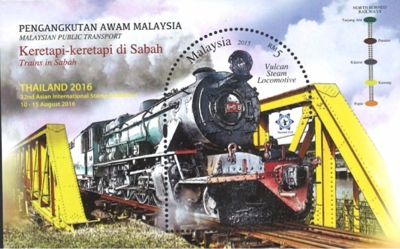 The Iraq postal service has issued a single stamp to commemorate the liberation of the governate of Anbar, including the city of Ramadi, by Iraqi government forces in the ongoing war against the vicious so-called "Islamic State". The Islamists had captured Ramadi on 17 March 2015 by launching multiple waves of suicide attacks during a sandstorm which caused Iraqi forces to withdraw from the city.
The Iraqi army, supported by Sunni and Shi'ite militia, began its campaign to liberate Anbar on 15 July 2015 but it was not until January 2016 that the Iraqi government could claim to have freed about 80% of Ramadi and on 20 January the city was said to have been cleared of ISIS fighters.
I do not yet know the date of issue of the stamp. See also Blogs 424, 601 and 718. 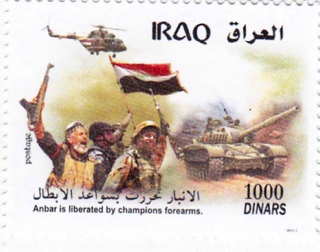