836. Post And Go At The Conservative Conference And Shakespeare Centre. 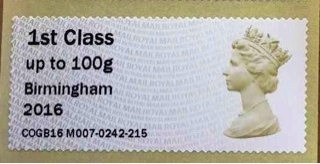 India Post issued a single stamp on 6 October 2016 to commemorate the induction of the Lockheed-Martin C-130 J-30 Hercules Aircraft into the Indiam Air Force. This is an interesting stamp with a well chosen photograph of the aircraft on the ground with clouds of dust blowing around dramatically behind it. Rating:- ****. 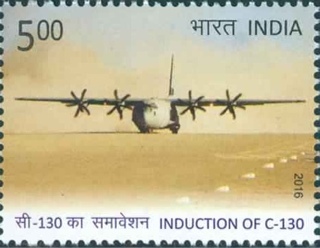 There has been a recent Royal Mail Post and Go surprise - a kiosk,  M007, was set up at the Royal Mail stand at the autumn annual Conference of the Conservative Party, held in Birmingham International Conference Centre from 2 to 5 October, and post and go stamps were dispensed with added location-specific inscriptions. Strips of the 6 "Postal Heritage" stamps and of the "Machin Head" designs were dispensed with the added inscription "Birmingham/2016". 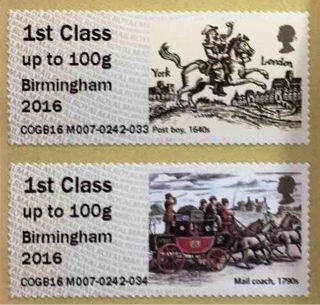 Apparently, Royal Mail also set up a stand at the Liberal Democrat Annual Autumn Conference which was held from 17 to 20 September in Preston and will also have a stand at the Scottish National Party Conference next week from 13 to 15 October. I have read nothing to suggest that a Post and Go kiosk dispensing site-specific stamps was in operation at the Liberal Democrat Conference nor whether there will be a kiosk at the Scottish Nationalist meeting.
A photograph taken at last year's Conservative Conference held in Manchester shows that a Post and Go kiosk was located there along with a post box and a life-sized cardboard cut-out figure of the former British prime minister, David Cameron, but I have never seen that reported before and certainly I have never seen any Post and Go stamps with location specific inscriptions being offered for sale from that meeting - so presumably none were produced. 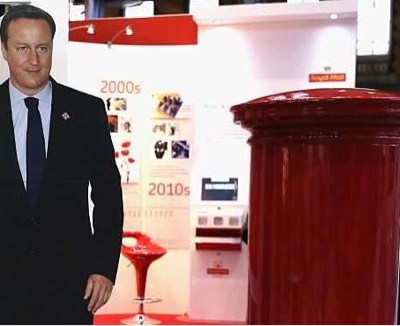 The use of kiosks at political conferences would seem to be a new departure for Royal Mail especially if added inscriptions are applied to the  stamps dispensed at these meetings. The conferences of the big parties in particular are attended by thousands of conference delegates so such issues are accessible to the many people attending the conferences and therefore may be viewed as serving postal needs and thus should probably have a home in the collections of collectors of British and/or Post and Go stamps. Rating:- *****.
But that's not all. It has been announced that Post and Go machine A009 will be installed at the Shakespeare Centre in Stratford-upon-Avon and will be operational from 1 November 2016. This is a very busy tourist site with tens of thousands of visitors from all around the world every year so the machine has a good chance of receiving considerable usage from those who wish to send postcards to home from Shakespeare's birthplace. The machine will dispense the "symbolic flowers" and Machin Head stamps with the additional inscription "Shakespeare Birthplace Trust". Rating:- *****.
But that's not all. Post and Go kiosk A011 be operational at the Royal Corps of Signals at Blandford Forum from 31 October 2016. Labels in the Machin Head and Union Jack designs will be dispensed with the added inscription "Royal Signals" and with an added logo. Rating:- ***.
But that's not all. Labels dispensed from Royal Navy kiosks, though not those at the Fleet Air Arm and Submarine locations, now have the added inscription "Trafalgar Day" whichis being applied to them from 23 September to 23 October 2016. 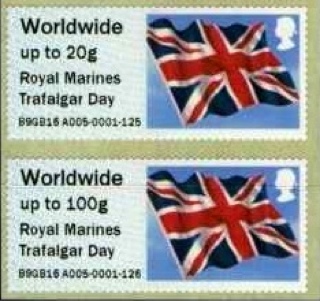 Then on 24 October 2016 until 13 November 2016 the "Poppy" Post and Go stamps will be reintroduced and dispensed by NCR kiosks at ordinary post offices and IAR kiosks at Enquiry offices, the Postal Museum and Royal Navy sites.
The Hibernating animals stamps in 4 designs (see Blog 827) will be put on sale on 14 November 2016 and be sold from NCR kiosks in post offices and from IAR kiosks at Enquiry offices and the The Postal Museum.
It is planned that kiosks will be sited temporarily at the following philatelic exhibitions during 2017:-
15 - 18 February 2017 - Spring Stampex, Business Design Centre, London
21 - 22 April 2017 - 88th Scottish Congress, Perth
8 July 2017 - MIDPEX, The Warwickshire Exhibition Centre
13 - 16 September - Autumn Stampex, Business Design Centre
Post scriptum:- I have found a photograph of the Liberal Democrat leader, Tim Farron, on his website  which was taken at the 2016 Conference in Preston (see above) which depicts him at the Royal Mail exhibition stand holding a large facsimile of one of the Beatrix Potter stamps - he is the Member of Parliament for South Lakes. Although 2 post boxes can be seen in the photograph there's no evidence of a Post and Go kiosk in the part of the stand that can be seen in the photo. 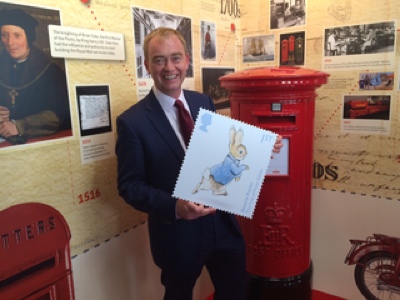 I think that Royal Mail must also have had a stand at the Labour Party Conference since there is a quote from David Gold, Royal Mail's director of public affairs and policy, about Royal Mail's attendance at political conferences, "We've had a lot of shaking hands ....it's a very efficient way of getting around.  I have no regrets about being at all four; it was definitely the right thing to do".
I suppose that we can deduce that the fourth must have been the Labour Conference in Liverpool from 25 to 28 September. Unfortunately I can not find any photographs of the Royal Mail stand at the Labour Conference and so have no idea if a Post and Go kiosk was set up there as well.
An Post, the postal service of Ireland will issue 2 SOAR ("stamps on a roll") self-adhesive stamps on 3 November 2016, the designs being printed by Cartor. They have a somewhat original appearance to them featuring, as they do, religious subjects. Rating:- ****.

An Post issued a block of four stamps on 6 October 2016 which commemorates the Commissioners of Irish Lights. The set was designed by Vermillion Design and lithographed by Cartor and perforated 13.5. Rating:- *****. A €13 "Prestige booklet" was also released as part of the issue. 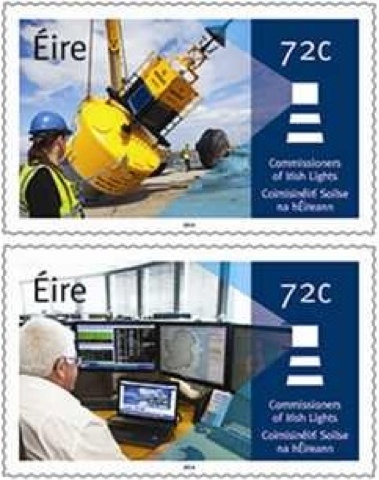 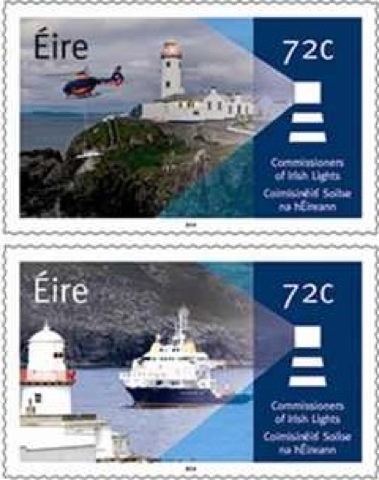 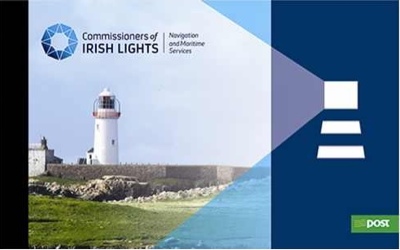