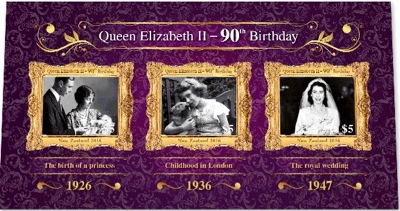 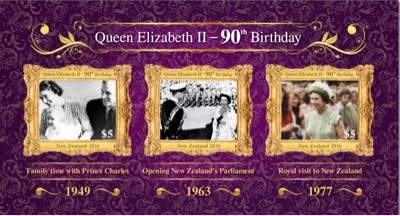 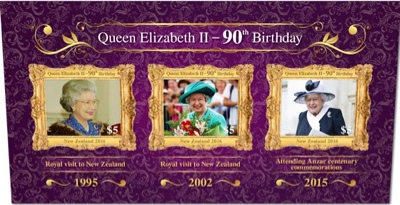 New Zealand Post will issue 1 miniature sheet containing 3 different "lenticular" stamps each giving 3 different illustrations of various stages in the life of Queen Elizabeth II to commemorate her 90th birthday. The stamps will be issued on 5 May 2016. The issue was designed by Jonathan Gray and printed using UV ofset printing by Enschede on self-adhesive paper with Ecolens 75 LPI lenticular Universal lens. A spectacular issue indeed which rounds off the list of commemorative stamp issues from the principle constitutional monarchies of The Commonwealth. Rating:- *****.

The Isle Of Man postal administration issued a miniature sheet containing 2 stamps on 21 April 2016 to commemorate the 90th Birthday of Queen Elizabeth II. The stamps are part of the set of 8 issued on 6 February 2016 to commemorate the Queen's birthday which include in their designs photographs taken by the photographer Arthur Edwards.
It looks as though this issue is sponsored by the English tabloid newspaper "The Sun" since the newspaper's logo is included prominently in the design. You might feel that this item represents the lowest point to which those who put out stamp issues for the island have plumbed -  commemoration of The Queen cheapened by an advertisement for The Sun! Oh dear! Rating: 0.
The set issued on 6 February 2016:-

As mentioned in Blog 744 Royal Mail issued a £15.11p "Prestige booklet" of 4 panes on 21 April 2016 to commemorate The Queen's 90th birthday. The 4 panes, one of which reproduces the wonderful miniature sheet, are illustrated below. The booklet was designed by Kate Stephens and Robert Hardiman and the panes were lithographed on gummed paper by International Security Printers. Rating:- *****. 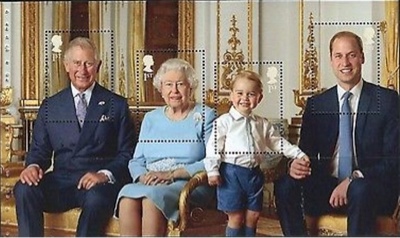 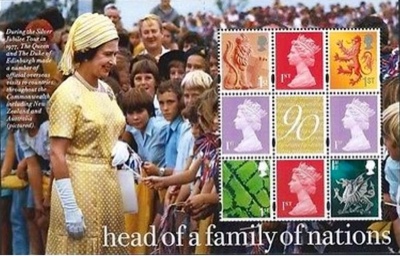 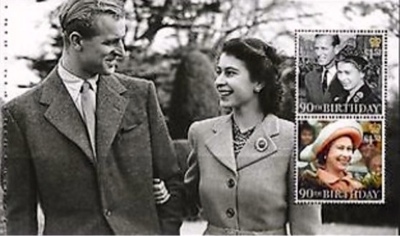 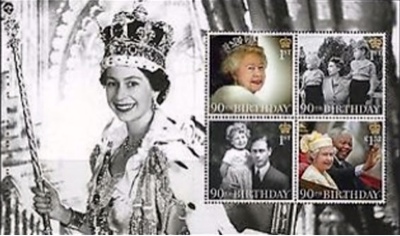 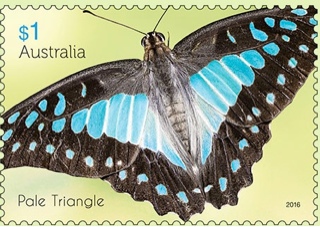 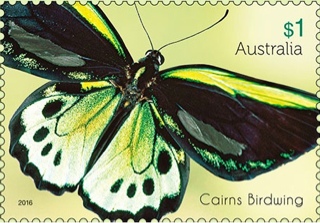 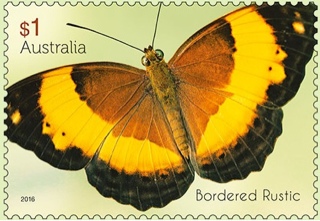 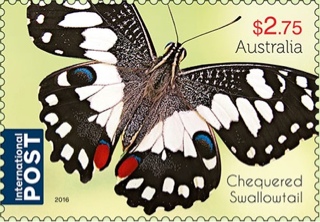 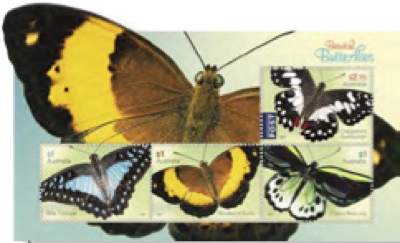 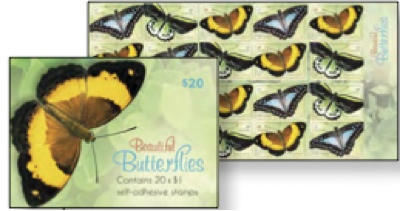 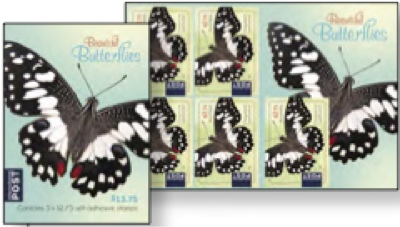 Australia Post will then issue a modest set of 3 stamps on 27 May 2016 with the inscription "Cocos (Keeling) Island" on the subject of Dolphins. This issue, total face value $3, was designed by Simone Sakinofsky and lithographed by RA Print, perforated 14.5 x 14. Rating:- ***. 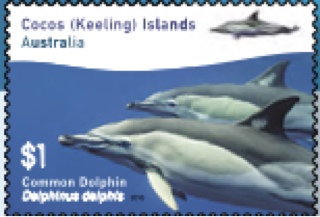 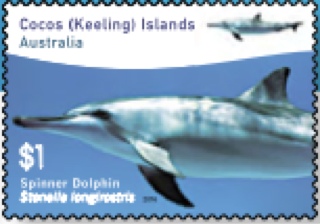 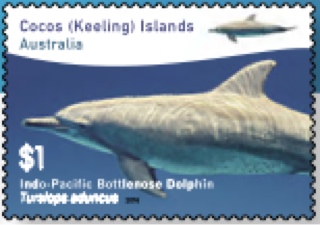 Australia Post will then issue 6 miniature sheets, a different one each day for 6 days, at the World Stamp Show New York from 28 May 2016. The Butterfly stamps will be used for this issue by being incorporated in the miniature sheets. Rating:- 0. 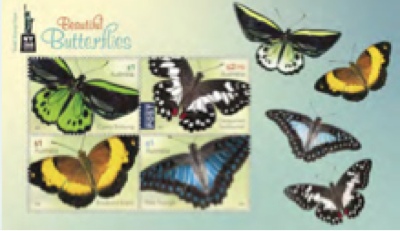 I find it difficult to feel any enthusiasm for the set of 4 stamps, 1 miniature sheet of 4 different stamps and 1 single stamp miniature sheet which have been produced by "The world's most respected philatelic agency", the US-based IGPC, in the name of the postal administration of Papua New Guinea. The designs seem to have nothing to do with Papua New Guinea and really are, in my poor opinion, terribly poor. The date of issue is stated to have been 30 March 2016. The designer was Yang Yansom and the issue was lithographed by Southern Colour Print. Rating:- 0. 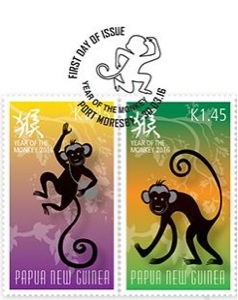 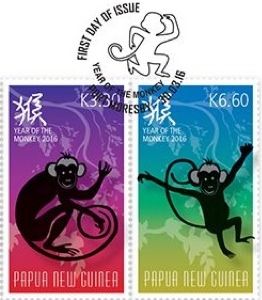 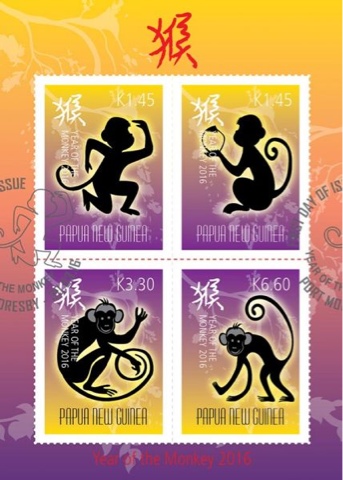 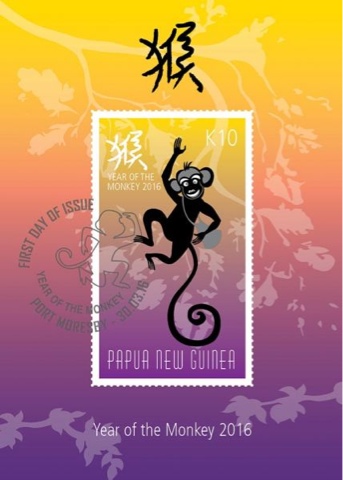 Two of the British comedians who were featured on stamps in the "Comedians" set of 10 stamps issued in 2015 have died in recent days. Ronnie Corbett, the short half of the Two Ronnies, died on 31 March 2016 at the age of 85 having suffered from motor neurone disease. His colleague, Ronnie Barker, had died on 3 October 2005 from cardiac failure, at the age of 76. 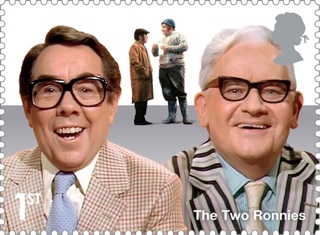 Victoria Wood died aged 62 on 20 April 2016 after a short illness with cancer. The Two Ronnies and Victoria Wood were all considered to be "National treasures" whose deaths made the top news of the day in Britain. 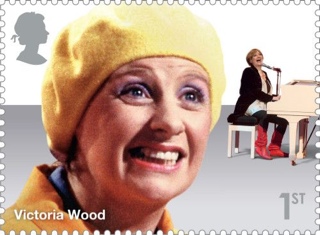