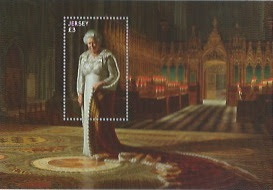 As mentioned in Blog 603, Jersey Post will issue 4 stamps and 2 miniature sheets on 9 September 2015 to commemorate the achievement by HM Queen Elizabeth II in becoming the longest reigning monarch in British history. The issue is made up of portraits of The Queen throughout the span of her reign. The 47p value features her Coronation Portrait by Cecil Beaton (1953), the 57p shows a Silver Jubilee portrait by Peter Grugeon (1977), the 71p value depicts a Golden Jubilee portrait by John Swannell (2002) and the £1.25p stamp depicts her Diamond Jubilee portrait, again by John Swannell (2012).
A £3 miniature sheet combines all 4 stamps while a spectacular second £3 miniature sheet, printed in lithography on silk by Cartor, depicts "The Coronation Theatre, Westminster Abbey: A Portrait of Her Majesty Queen Elizabeth II" by Ralph Heimans, a painting which was commissioned by Buckingham palace in 2013 on the 60th anniversary of the Queen's coronation. Rating:- ***** 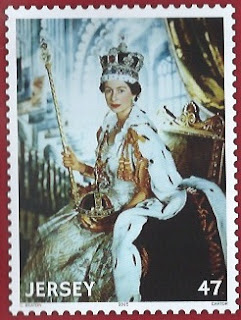 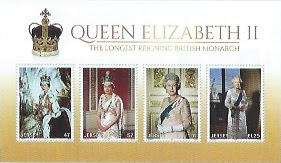 A previously unreported stamp issue has appeared on the Guyana Post Office Corporation website. The set of 3 stamps which seems to have originated from the Guyana Post Office itself rather than its foreign philatelic agents was issued on 5 February 2015 and commemorates the 50th anniversary of the Guyana Defence Force.
The Guyana Philatelic Society also features the issue on its website but as a miniature sheet and it may be that the 3 stamps were issued only in miniature sheet format. Importantly, the 3 stamps have face values which are relevant to local postage rates unlike the items aimed at the philatelic market produced by IGPC which generally have higher face values. Rating:- **** 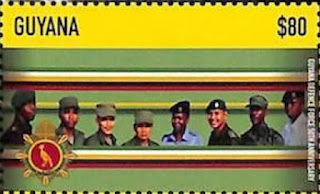 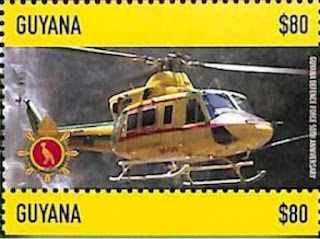 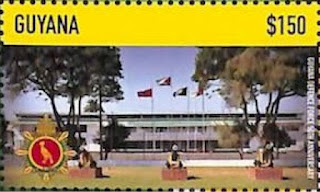 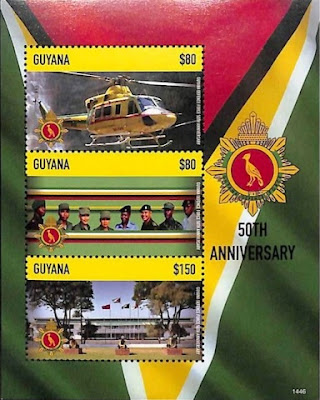 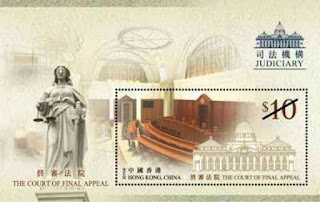 More bogus issues - In Blogs 586 and 595 I highlighted various bogus "stamps" with the names of Commonwealth countries printed on them which are being sold by a vendor in Russia and sometimes by one in Spain. All of the bogus items relate to Russian sporting events - the Sochi Winter Olympic Games, this year's Ice Hockey Championships and the 2018 Moscow Football World Cup competition. Bogus items with the names of Tanzania, Solomon Islands, Malawi, Tonga, Uganda and Zimbabwe have been mentioned previously and now bogus 2014 Sochi Games "miniature sheets" from Kenya and Mozambique can be added to the list as depicted below.
Additionally there are a number of similar items being offered for sale from a large number of non-Commonwealth, particularly African, countries and these are all similar to those depicted below.
The problem with these items is that they look very much like the numerous poorly designed and badly printed "official" items being produced by certain philatelic agencies on behalf of some of these territories and anyone who is interested in any of the featured themes and does not know better might spend a lot of money buying this stuff simply because they look like the usual agency-produced (but theoretically postally valid) Items. Buyer beware! 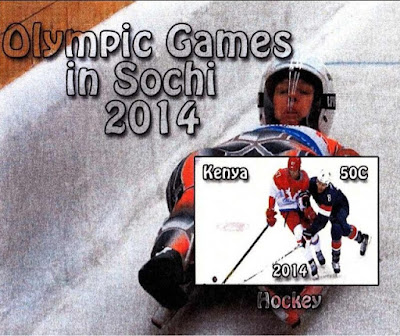 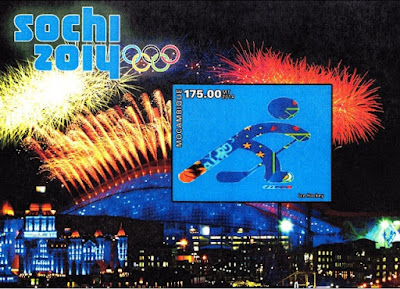