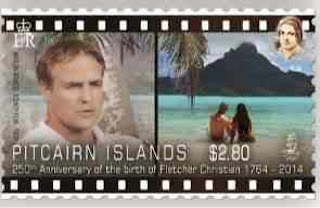 Pitcairn Islands will issue 5 exciting stamps on 25 September 2014 to commemorate the 250th birth anniversary of Fletcher Christian who led the mutiny on board the HMS Bounty. The designer, Denise Durkin, has cleverly chosen the depiction of the character in various movies and the issue provides a genuine reason for the appearance of actors such as Clark Gable ($1) and Marlon Brando ($2.80) on stamps of a small Commonwealth island. The stamps were printed in lithography by Southern Colour Print. The $3 value depicts the Australian actor Mel Gibson from the 1984 version of the story which was titled "The Bounty":- 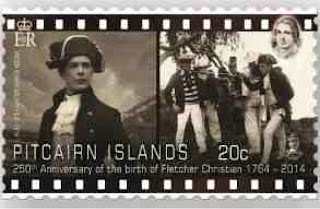 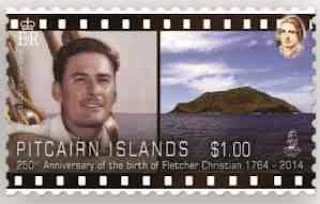 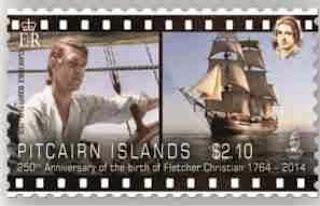 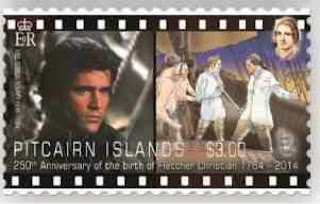 Many stamps have been produced by certain postal agencies which depict, for no obvious reason, various film stars and celebrities on the stamps they produce with the names of various Commonwealth territories printed on them. Those celebrities rarely have any connection with the territory which has been selected to feature them. But here is a celebrity-depicting set of stamps which has genuine connections with the issuing territory and there are other cases where such issues could be quite legitimately produced - for instance there have been a number of films made over the years which tell the story of various explorers in Antarctica and territories such as South Georgia or British Antarctic Territory would have very good reasons for depicting these films on their stamps.
Jersey Post started to issue "Post And Go" stamps from the first machine to be installed in the Broad Street post office in St. Helier on 4 September 2014. Up to that date the island's "Post And Go" issues were not available from any machine situated in Jersey since none existed for public use although machines were sited at various philatelic exhibitions outside of Jersey. Thus from 4 September 2014 the status of Jersey Post And Go's could be raised from "Exhibition souvenirs" to genuine postage stamps. I will therefore begin my Jersey Post And Go collection from that date.
The first locally-sited machine stamps consist of the familiar Jersey flag design with the added inscription "BROAD STREET":-

Bizarrely, the Broad Street machine also produces Royal Mail "Union Jack" stamps with the "BROAD STREET" inscription thus creating a new Royal Mail stamp which is not sold in Britain but is only available from Jersey where the stamp has no postal validity. Unless these Union Jack Broad Street stamps are sold by the Royal Mail Philatelic Bureau we will have a unique situation whereby British stamps are produced and sold only in a foreign territory (Jersey) where they have no postal validity but are not sold in Britain where they do have theoretical postal validity.

Royal Mail will issue yet another 6 x 1st retail booklet on 18 September 2014. The booklet contains 4 x 1st Machin Head definitives and 2 x 1st "Classic Locomotives of Wales" stamps in self- adhesive format. The face value will be £3.72p:-

The British seaside architecture minature sheet which I mentioned in Blog 448 is depicted below. All 4 stamp designs appear to successfully capture the dull, grey skies of a British summer overcast with lowering clouds. Given the designs of these stamps, it is no wonder that Royal Mail has waited till autumn to issue them (date of issue: also 18 September 2014 - total face value of set of 6 stamps plus miniature sheet is £9.54p):- 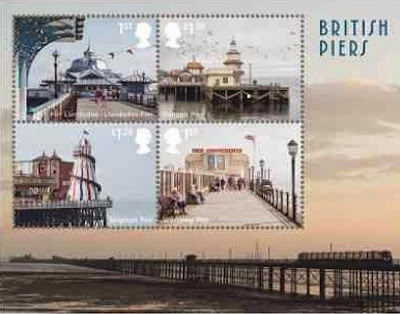 Meanwhile, another recent issue from Tanzania has been offered for sale on an Internet auction site. The set was issued on 31 July 2013. The issue returns to a recurring theme of East and South African stamp issues - "The Big Five". The issue is comprised of a sheetlet of 5 different stamps and 5 miniature sheets. All the items have higher face values than are usually seen in these locally relevant sets - 5 x 1800/- for the sheetlet stamps and 5 x 1600/- for the miniature sheets giving a total face value of 17000/- or £6.27p - but let's face it, this is still less than the usual total face of a Royal Mail set of stamps and accompanying items. 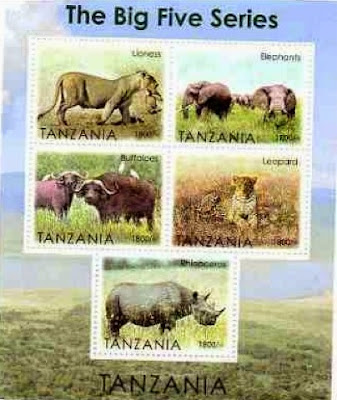 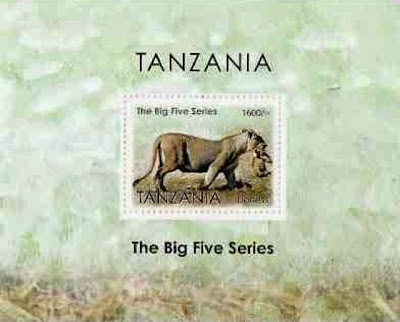 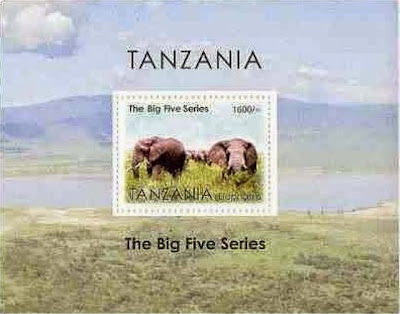 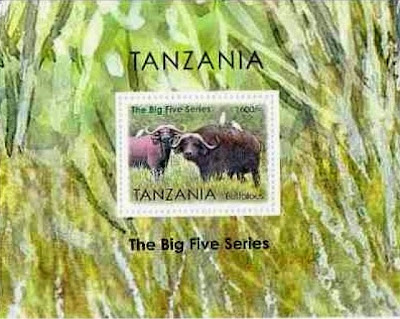 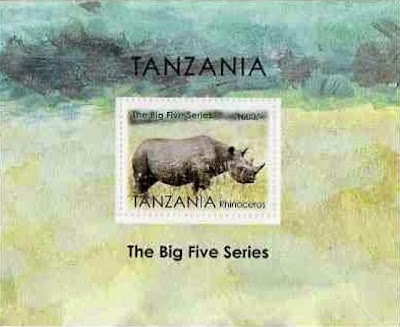 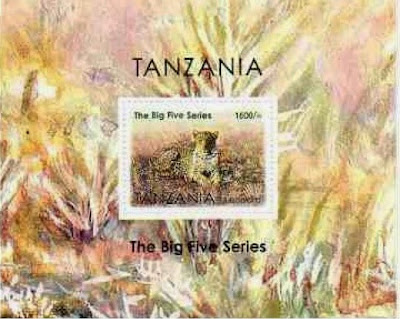