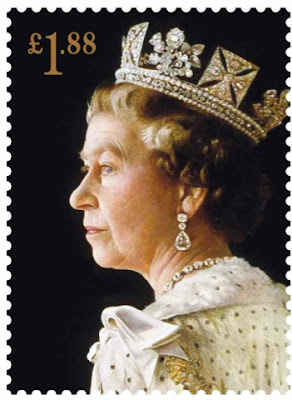 Royal Mail has outlined its commemorative new issue programme for 2015. There will be 13 special issues plus 3 "Post And Go" releases. The subjects of the stamps include the 150th anniversary of the bizarre and vaguely unpleasant "Alice In Wonderland" (date of issue 6 January), "Inventive Britons" (19 February), Bridges (5 March), "Comedy Greats" (issued, aptly, on 1 April), 175th anniversary of the Penny Black (issued also aptly on 6 May), Centenary of the First World War second issue (14 May), 800th anniversary of Magna Carta (7 June), Bicentenary of the Battle of Waterloo (17 June), 75th anniversary of the Battle of Britain (16 July), Bees (18 August), The Rugby World Cup (18 September) and Christmas (3 November).
There is one more issue which is to be released on 6 October the details of which have been held back by Royal Mail but it is clear that it will be a special issue to commemorate the achievement by HM Queen Elizabeth II in becoming the longest reigning monarch in British history which actually occurs on 10 September 2015 when she will have reigned one day longer than Queen Victoria. Presumably, as there is still a year to go to what should be momentous national celebrations, Royal Mail is being discrete about announcing the issue since quite a lot could happen in the intervening time whereby the issue may not be appropriate.
Perhaps you can have too much history and commemorate too many important military anniversaries as far as Royal Mail is concerned - apparently there will be no stamps to commemorate the 750th anniversary of Simon de Montfort's parliament and no issue to commemorate the 600th anniversary of the Battle of Agincourt (unless that is the mysterious issue of 6 October - the English won one of their most famous victories against the French on 14 October) but surely there must be an issue to celebrate The Queen and her record reign. Notably, no issue is planned to commemorate the funeral of King Richard III in March 2015 (well, who wants to commemorate a vicious murderer anyway?)
So much history - other postal administrations must look on jealously when they see the wealth of potential subjects for inclusion in a new issue programme that exists in Britain. But it seems sad not to commemorate Agincourt and instead issue a set of comedians. Perhaps commemorating two victories over the French in one year was considered to be overdoing things.
The twice yearly Stampex philatelic exhibition held in London has a lot to answer for. Royal Mail has used it as a reason to set up its Post And Go machines on a 6 monthly basis there and numerous varieties of exhibition souvenirs have been dispensed, usually not otherwise available to the general public and since the spring exhibition of 2014, Jersey Post has done the same thing. Collectors have been tempted with further Post And Go exhibition labels at the autumn 2014 Stampex exhibition.
Jersey's product on this occasion is a Collectors' Strip of 6 labels which again uses the ubiquitous Jersey flag design but with the added inscription "First World War Centenary" but this particular inscription is not used on the stamps dispensed directly to the public by the Post And Go machine situated in Broad Street post office in Jersey itself. So, once more, we have Jersey stamps sold in a country where they are not valid for postage but not directly available to the public in the island where they would be valid for postage! 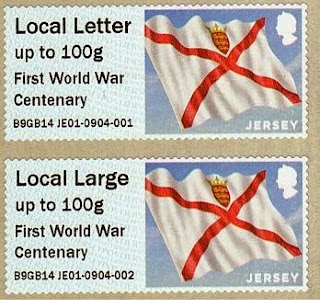 Meanwhile, Royal Mail's Autumn Stampex souvenir is a strip of Poppy stamps also with the inscription "First World War Centenary". The poppy stamp, without the added inscription, is available to ordinary mail service users in normal post offices as part of the strip of the "Symbolic Flowers" issue as detailed in Blog 452 but the poppy issue with inscription is only available at the philatelic exhibition which is why I view it purely as an exhibition souvenir rather than a proper postage stamp and will not bother to spend £7.42p to acquire it for my collection:- 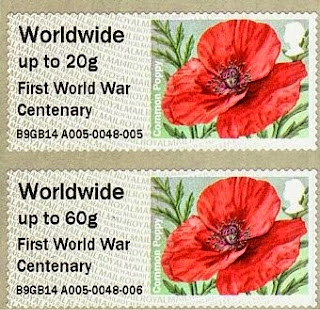 One issue I overlooked from 2013 is the sheetlet of 4 stamps and 1 miniature sheet issued by the philatelic agents of St. Kitts to commemorate the Thailand 2013 philatelic exhibition. I mention it merely for completeness since I have no intention of including it in my collection because the theme of "Textiles of Thailand" seems to be wholly irrelevant to St. Kitts itself:- 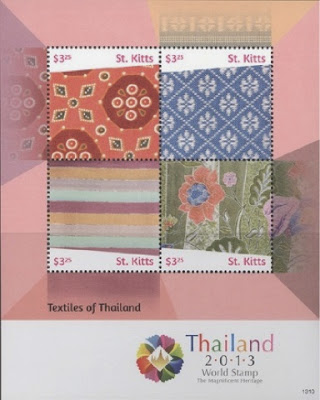 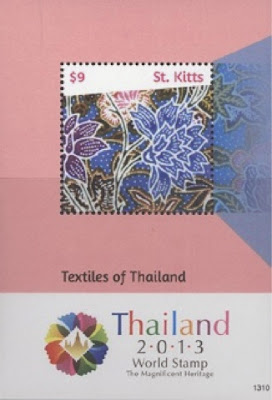 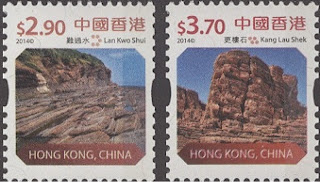 The latest products from the philatelic agency, Philatelic Collector Inc., for the territories in the Pacific area with which it has a contract are:-
Samoa:-
23 July 2014 - "Official" overprints on definitive stamps - 24 stamps;
28 August 2014 - Personalisable stamp - 1 stamp;
29 August 2014 - SIDS (Small island developing states) - 18 se-tenant stamps and 3 miniature sheet;
16 September 2014 - 40th anniversary of the Commonwealth Games - 4 stamps:- 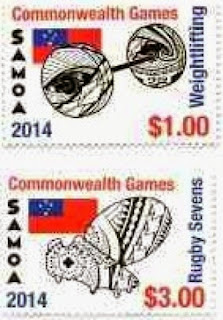 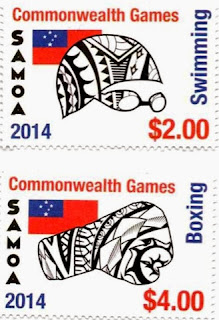 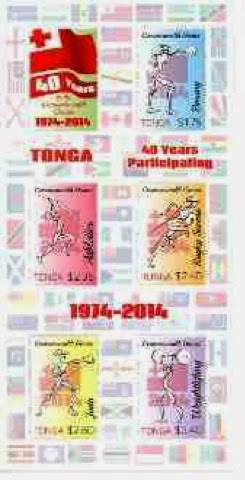 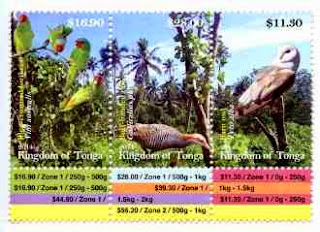 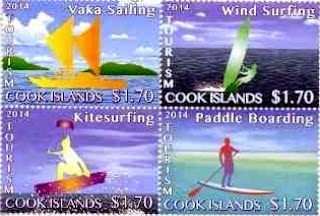 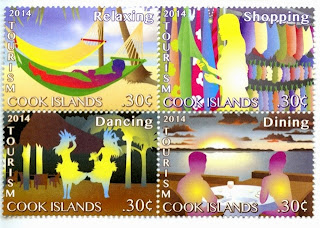 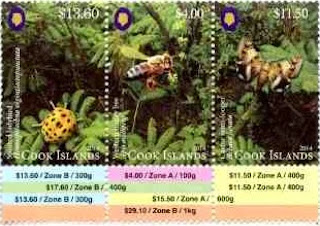 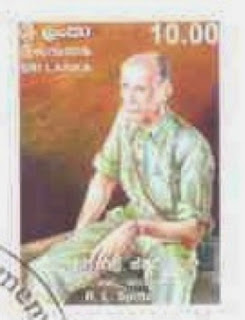 A set of 4 stamps and 1 miniature sheet was released on 15 September 2014 to commemorate the Asian-Pacific Postal Union Executive Council Meeting which was held in Sri Lanka:- 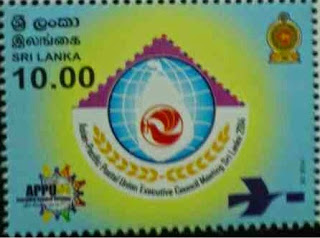 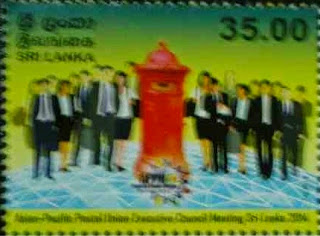 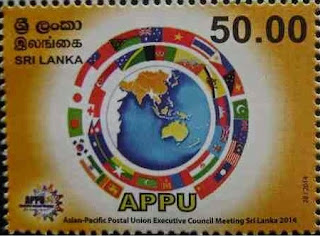 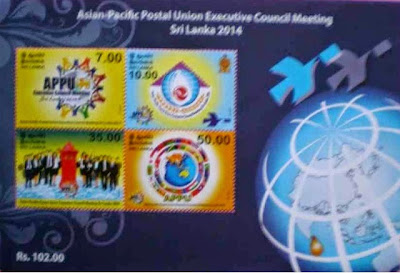 The latest items from Stamperija produced in the name of Solomon Islands amount to a total of 40 "stamps" (issued as 10 sheetlets of 4 different "stamps", each sheetlet being devoted to a different subject) and 10 accompanying miniature sheets. The "date of issue" is stated to have been 3 July 2014 and the random selection of subjects featured are:- the French artist Toulouse Lautrec, Christophe Wiilibald Gluck, Jaharwalal Nehru, Alphonse Mucha, Ayrton Senna, Charlie Chaplin, "Diving", "Football Brazil 2014", Josephine de Beauhamais (wife of Napoleon Bonaparte) and Louis Renault.
These items are similar to almost everything else that has been produced by this philatelic agency with the name of Solomon Islands printed on them and there is little point in illustrating them here. The total face value of 1 mint example of each of the above items is $640 Solomon Is or £53.11p.
It's remarkable, isn't it, how these tiny Pacific territories seem to need so many high face valued stamps?