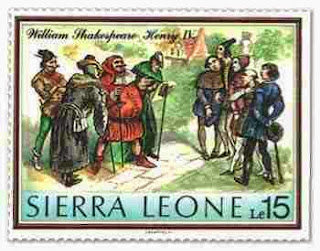 As has probably become clear after some recent blogs wherein I complained about the failure by Royal Mail to issue any stamps during 2014 to commemorate the 450th anniversary of the birth of William Shakespeare, one of the most notable Englishmen in history, I am something of a Shakespeare enthusiast. I have therefore in recent months very much enjoyed being able to visit nearby Stratford-upon-Avon to see the Royal Shakespeare Company's latest productions of Henry IV part 1 and Henry IV part 2 in which one of Shakespeare"s most important and memorable characters, Falstaff, plays a prominent part (and played wonderfully by Anthony Sher in these latest productions). My recent visit to Henry IV part 2 resulted in my obtaining a (sort of) splendid philatelic souvenir of the play - a letter from Sir John Falstaff himself, no less!
In Act 2 scene 2, a letter to Prince Hal, the future Henry V, from Falstaff is delivered to the prince by Falstaff's page and the prince and his sidekick, Poins, discuss the contents of the letter.
The letter is addressed to "His Royal Highness Prince Harry of Wales" and the text is read out to the audience. A piece of paper was used as a prop to represent the letter and at the end of the scene Poins screwed up the letter and as he left the stage threw the ball of paper down into the audience next to where I and a friend were sitting. When we smoothed out the cast-off piece of paper we were surprised to find that the props master had actually taken the trouble to print the letter out on to the paper and used red ink to give the impression of sealing wax. We had a lovely souvenir of the play in the form of a letter from Falstaff - what could be more thrilling for a philatelist interested in Shakespeare? 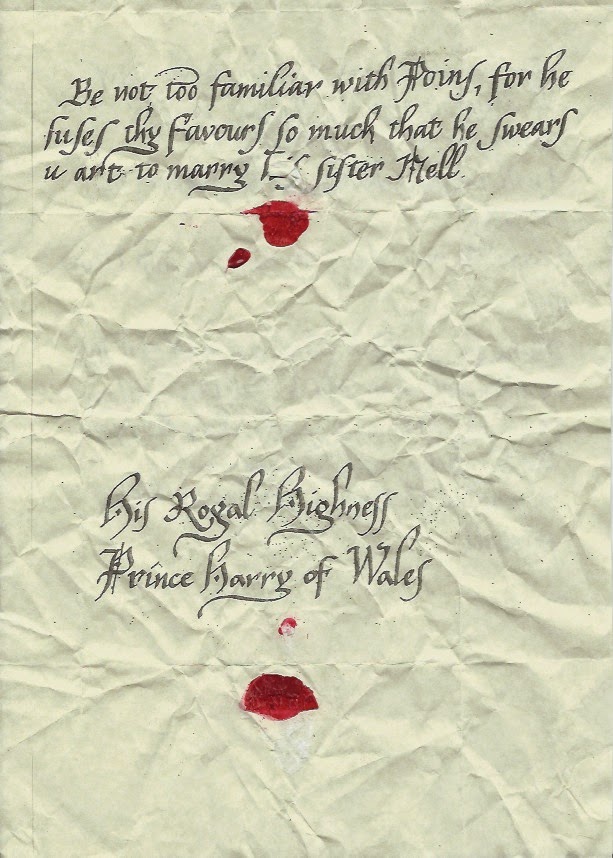 The text of the letter reads "Sir John Falstaff, Knight, to the son of the King nearest to his father, Harry Prince of Wales, greeting. I will imitate the honourable Romans in brevity. I commend me to thee and I leave thee. Thine, by you and me, which is as much as to say as thou usest him, Jack Falstaff with my familiars, John with my brothers and sister, and Sir John with all Europe Repent at idle times as thou mayst, and so, farewell.
Be not too familiar with Poins, for he suses the favours so much that he swears u are to marry his sister Nell". Given the final sentence, it's little wonder that Poins screws up the letter and throws it away.
This splendid piece of pseudo-philately and theatre memorabilia is depicted in detail below:- 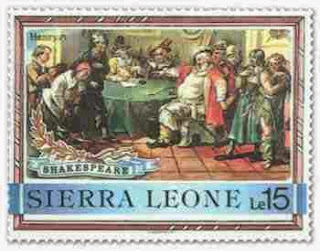 Remarkably the character of Falstaff has been featured on 3 stamps from Sierra Leone which means that he has actually appeared on 3 more of that country's stamps than Sierra Leone's current State President. The stamps were part of a set of sixteen (two sheetlets each of 8 different stamps) and 2 accompanying miniatures sheets which commemorated the 425th anniversary of Shakespeare's birth. The designs are  based on the unmistakeable artwork of the excellent stamp designer Gyula Vasarhelyi.
The stamp depicted at the head of the piece depicts a scene from a Henry IV part 1 where Falstaff and his stooges stage a robbery but in turn is robbed by Prince Hal and Poins in disguise. The second stamp shows Falstaff in a tavern scene which may have been in Part 1 or Part 2. The final stamp shows a scene from the third play in which Falstaff makes an appearance - "The Merry Wives of Windsor".

Apart from his appearance on the 3 stamps of Sierra Leone he also makes a rather bizarre appearance on a stamp of St. Vincent Grenadines where he is depicted as though played by the Walt Disney character Pete. This stamp was issued as part of a set of 8 stamps and 2 miniature sheets which was released on 3 May 1990 which was titled "Mickey's Shakespeare Company" and commemorated the "Stamp World London 1990" (see Blog 406). Despite Falstaff's importance in the hierarchy of Shakespeare's most significant characters he has not yet appeared on a British stamp.

In Blog 400, I depicted a stamp from the set of six issued by Royal Mail on 12 April 2011 to commemorate the 50th anniversary of the Royal Shakespeare Company (RSC) and which showed a photograph of the actor Anthony Sher in The Tempest. As mentioned above, Anthony Sher has recently been playing Falstaff at The Royal Shakespeare Company in Stratford-upon-Avon and his physical appearance as Falstaff is very similar to his depiction on the 2011 stamp:-


Although my interest is mainly in stamp collecting, sometimes I can not resist buying souvenir postcards of places I have visited or interesting things I have seen and it is reasonable to argue that a collection of postcards can add to a stamp collection especially, I suppose, thematic collections. One interesting series of postcards that I have not been able to prevent myself from buying is the packs of 5 different cards which are sold at The Royal Shakespeare Theatre, each pack devoted to a different production.
From 2013 for a 5 year period the RSC is to put on a production of each of Shakespeare's plays to commemorate Shakespeare's 450th birth anniversary (2014) and 400th death anniversary (2016) starting with Richard II, Henry IV Part 1, Henry IV Part 2 and Two Gentlemen Of Verona. A set of postcards has been produced for each play and Sher's Falstaff has featured prominently on several of the cards (the first 2 cards are from Henry IV Part 1 and the others are from Part 2):- 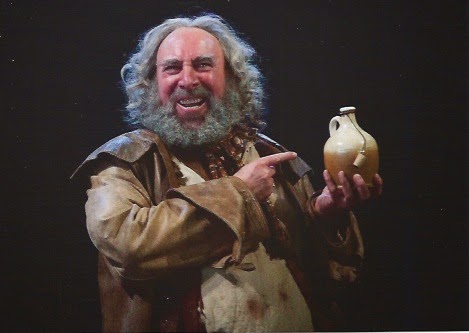 These postcards are complemented very nicely in my collection by my letter from Falstaff. I shall try to collect each set issued during the celebratory 5 years which will add up to an excellent deltiological record of Shakespeare's plays as well as recalling memorable performances by notable actors. At the same time any Commonwealth Shakespeare commemorative stamps that appear will also be possible additions to the collection though I doubt if the productions of one or two exploitative philatelic agencies will find their way into the collection.