A number of British merchant ships will be depicted on a set of 6 stamps which will be released by the British postal service, Royal Mail, on 19 September 2013 to commemorate the bicentenary of the British merchant fleet. The set comprises 3 x Ist stamps and 3 x £1.28p stamps so that despite promising to issue more 2nd class stamps this year to meet collectors' concerns about the spiralling cost of British new issues, Royal Mail has once more failed to keep its promise. The stamps are interesting and attractive and among the designs are illustrations of Royal Mail ships including The Britannia and the Queen Mary which is shown arriving in New York after crossing the Atlantic Ocean. This is one of the rare instances of a British stamp depicting a foreign city - other examples that come to mind are Beijing (the Olympic Stadium on 2008 Olympic Handover issue), the British Pavilion at Expo'92 in Seville (1992 Events and anniversaries set), and the Pompidou Centre in Paris, the Statsgalerie in Stuttgart and the European Investment Bank in Luxembourg (all from the 1987 British architects set). The set was lithographed by Cartor. 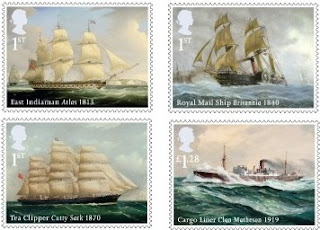 Accompanying the above set is a miniature sheet of 4 x 1st stamps (again, no 2nd stamps) which commemorate the Atlantic and Arctic Convoys of the Second World War. The m.s. and the set of stamps were all designed by Silk Pearce and the m.s. was lithographed by Enschede:- 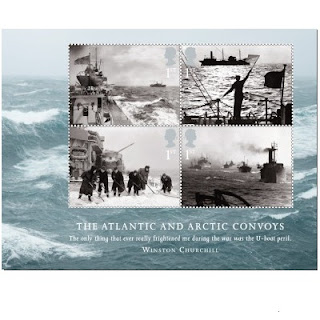 But that's not all (of course it isn't). There is also an accompanying £3.60p retail booklet of 6 x 60p self-adhesive stamps) which includes 1 stamp featuring a mail van previously issued only in gummed form in the "British Auto Legends The Workhorses" miniature sheet released on 13 August 2013 and a self-adhesive version of the Royal Mail Ship Britannia from the above set:-

To complete the assault on collectors' wallets, an £11.10p "prestige" booklet will also be issued. I used to buy 2 copies of these prestige booklets - one for displaying intact and one for displaying in "exploded" form, however, since the booklets are now so costly and numerous I just buy one example which means that Royal Mail's growing greediness manifested in the issue of ever increasing numbers of these products has not paid off because now I actually buy fewer booklets in total than I would have done a couple of years ago!
I think that that is a manifestation of the Law of Diminishing Returns.

However, the quest for ever increasing philatelic revenues is also being pursued by the issue of 6 further stamps in the "Post And Go" Freshwater Life series, this time on the subject of river life. These will be sold from Wincor Dixdorf machines situated in post offices, in packs of all 6 values printed in lithography and presumably from Hytech machines at the upcoming "Autumn Stampex" Exhibiton (together no doubt with some other Hytech variant which will only be available at Stampex). I am very close to giving up the collecting of the Post And Go issues (except those available from actual working machines in proper post offices). I will just view them as "Footnote Issues" along with stamps of Solomon Islands, Mozambique and many from Ghana, Grenada and The Gambia as I described in the previous blog.

And here are some Footnote Issues - sets I won't be buying:-

Ghana - Mammals of Africa - sheetlet of 4 stamps and 1 miniature sheet - designs do not all depict mammals which are found in Ghana. Why not issue a "Mammals of Ghana" set?:- 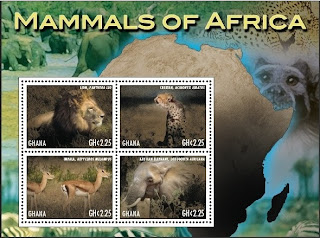 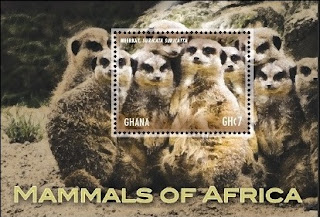 Animals of Africa - Two sheetlets of different stamps. 1 of 5 stamps and 1 of 6 stamps - again designs are not necessarily relevant to Ghana itself. Again, why not an "Animals of Ghana" set?:- 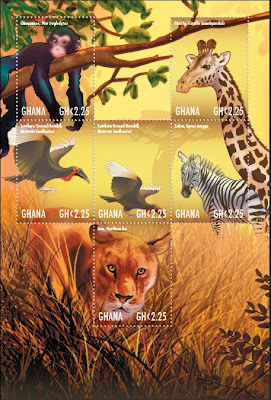 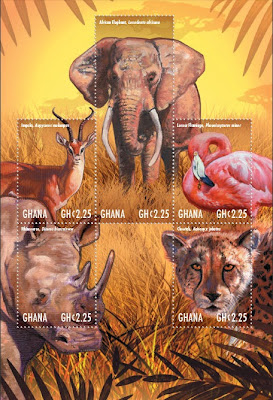