304. Maldives Is Another Recipient Of China Diplomatic Relations Issue.

Following on from Blog 301 where I highlighted the increasing number of issues produced by The People's Republic Of China which commemorate the diplomatic relations between China and various Commonwealth countries and which are then donated to those countries' postal administrations, a further example has come to light - this time it is the Maldive Islands.
An issue was announced on 28 December 2012 which was to commemorate the 40th anniversary of the establishment of diplomatic relations between The People's Republic and Maldives and which seemed to coincide with the the visit of President Mohammed Waheed Hassan Manik of Maldives, who had come to power on 7 February 2012 after the democratically elected Maldivian President, Mohammed Nasheed, had been deposed in a coup. Interestingly, in the first round of Presidential elections recently held in Maldives, President Waheed came last in the poll with the deposed President winning the first round, although he did not receive enough votes to secure victory without a run-off election.
The stamp issue appears to be comprised of a sheetlet of 12 stamps, 2x6 designs, and a miniature sheet which also incorporates all 6 stamps and they depict boats, pottery and marine life representative of the 2 countries. The miniature sheet was also issued in plastic format like the 2011 miniature sheet produced for issue by Cameroun to commemorate Chinese-Camerounian relations. A single example of this has been on sale on an Internet auction site for a considerable sum, being sold by a vendor in China:- 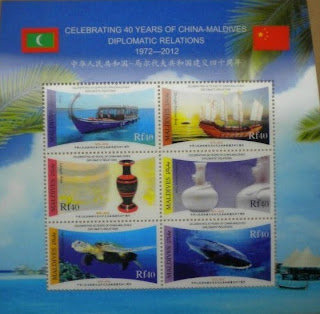 The first of the usual Commonwealth-wide multitude of issues for use on Christmas mail has been announced by New Zealand Post and is comprised of 5 gummed stamps from ordinary sheets and 3 self-adhesive stamps from booklets. The cheerful designs, which will be released on 2 October 2013, show modern but traditional-style family Christmas scenes. The stamps were designed by Martin Bailey and lithographed by Southern Colour Print. The 3 higher values are depicted below:- 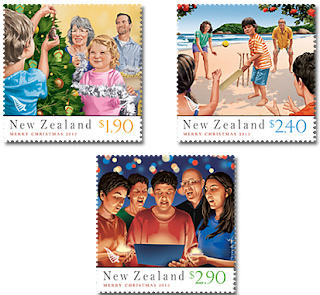 Unlike the same values from the gummed quintet, the 2 higher values of the self-adhesive trio include a blue strip at the bottom of the design which is inscribed "Par Avion Air":- 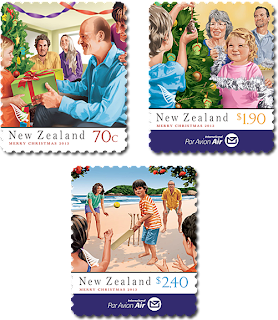 I now depict the  miniature sheet  which accompanied 5 stamps produced by Australia Post with the inscription "Australian Antarctic Territory" and which were released on 10 September 2013 (see Blog 303):- 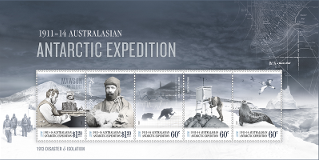 The 2 latest issues from India are a single stamp issued on 21 August 2013 which commemorates the 101st birth anniversary of Raj Bahadur (presumably the Indian Post Office overlooked his centenary). Bahadur is celebrated as a notable parliamentarian and freedom campaigner. He was born on 21 August 1912 at Bharatpur in Rajasthan:- 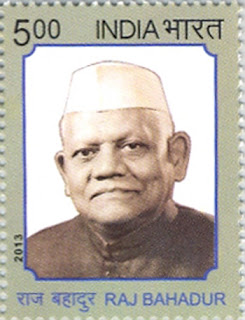 The second issue is comprised of 3 sheetlets, each of 4 different stamps on the subject of "Wild Flowers of India". The stamps were issued on 3 September 2013:-

The latest issue from Pakistan was also released on 3 September 2013 but the subject could not contrast more with India's wild flower set. The stamp depicts a warship and celebrates the commissioning of the first F-22P ship to actually be built in Pakistan itself. The designs were prepared by PNS-ASLAT and lithographed by Pakistan Security Printing Corp. in Karachi:- 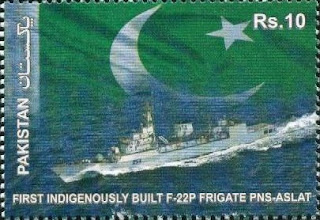