301. What Stamps Tell Us (II) - Philatelic Imperialism Or Social Networking? 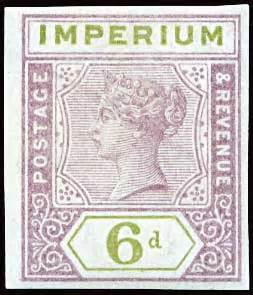 A recent issue from Uganda appears to have been donated to the Ugandan Post Office by The People's Republic of China as a means of emphasising the friendship of the two countries on the occasion of the 50th anniversary of the establishment of diplomatic relations between the two republics. The pair of stamps and an accompanying miniature sheet were issued, I believe, on 10 October 2012 and the two stamps have a remarkably high face value of approximately £10. One design features scenes, including the Great Wall of China, from both countries and the second depicts a giant panda from China and a gorilla which represents Uganda.
China has produced  a large number of such stamps for countries with whom they share diplomatic relations over recent years and the issues clearly have propaganda value by promoting China as a friendly power in the world. Many of the African countries for whom these issues have been prepared have significant Chinese presences within their borders particularly when there have important natural resources which the Chinese wish to have access to. The question is, do these represent a modern form of philatelic imperialism or a philatelic form of demonstrating social networking between nations?

The new stamps were launched in Uganda at an impressive ceremony so the significance of the issue to both countries should not be understated. Stamps can still play an important role in international relations and it is a role which The People's Republic Of China has been particularly adept at recognising in the last decade or so:- 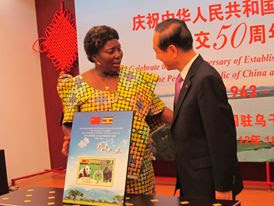 The importance of postage stamps as projections of international image go back to the early years of their production when the portrait of Queen Victoria was placed at their very centre and announced just who owned the imperial territory for which the stamp was issued. The Imperium essays are items which were produced in the colonial key-type design which depicted Queen Victoria with the colony's name substituted by the word "IMPERIUM". The items were prepared by De La Rue and Co. to demonstrate to the colonies which were ordering the stamps the different colour combinations which could be used on the stamps. They were produced in many colours with values expressed in pence or cents and exist perforate or imperforate on gummed, watermarked paper. It is hard to think that few philatelic items can be more redolent of imperialism than these essays even if they are not fully fledged stamps. The grandiose term itself "Imperium" speaks for itself and demonstrates extraordinary Victorian hubris. Further examples of these essays are depicted below:-

While Britannia was the allegorical representation of The British Empire Queen Victoria, Empress Of India, was its living embodiment. When the Queen celebrated her Diamond Jubilee in 1897, the portraits used on stamps which were issued to commemorate the event portrayed a dramatically imperial image at the time when the British Empire was at its zenith as a world power. Canada issued a set of 16 stamps on 19 June 1897 to celebrate the Diamond Jubilee which depicted a portrait of the young Victoria and a portrait of the Queen Empress in her old age - they give the impression of full imperial dignity. 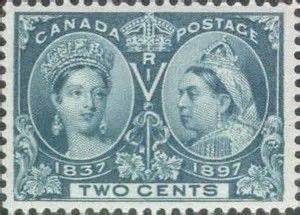 The final word in portraits of an Empress at the apogee of her empire's power must be that which appears on the stamp depicted below which showed a photographic portrait of the queen by W and D Downey and which was issued in 1897 as part of a definitive series which ranged in values from one half cent to 10c:- 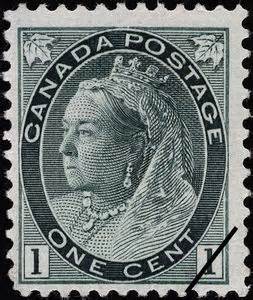 Within The British Empire was The Indian Empire which had been invented by Benjamin Disraeli so that Queen Victoria could be given the title of "Empress". Imperialism had reached its peak and the British and their Empire's stamps gloried in it. The celebrations to commemorate the Silver Jubilee of Victoria's grandson, George V, in 1935 were accompanied by a magnificent omnibus issue of stamps from the British colonies as well as issues from the Dominions and an individual issue from The Indian Empire. The Indian issue was comprised of 7 stamps and depicted the King Emperor along with scenes from across his Empire throughout India including a depiction of a magnificent symbol of the once glorious, old Mughal Empire which the King Emperor's people had conquered - the Taj Mahal. Such blatant unashamed imperialism!:- 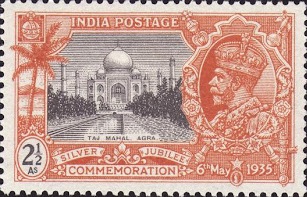 The colonial omnibus issue consisted of 4 stamps per colony which again depicted the King Emperor in his imperial finery with a scene of Windsor Castle, a royal residence close to London, the very heart of the Empire. Every citizen who lived in one of the numerous colonies would have been able to use one of these stamps on his or her mail and it would have reminded them of the enormous Empire of which they, too, were citizens. Not since the days of ancient Rome had such an entity existed - that was certainly the message of this issue:- 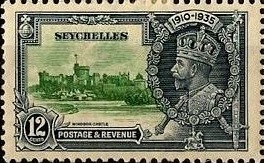 And yet the days of the Empire were already numbered as Great Britain was exhausted and impoverished by the Second World War and colonial peoples who had fought for The Empire against the tyrannies in the war began to clamour for their own nations' freedom. The power of the British Empire and its Empire-wide cultural influence gave way to its successor as the major world power - The United States. And what The USA began to give to the philatelic world from about 1960 onwards was its culture especially as one New York-based philatelic agency began to convince a relatively large number of Commonwealth countries to allow it to produce and market their stamps for them.
By the end of the century the stamps of these countries were dominated by depictions of American culture - their stamps featured American presidents rather than their own leaders, American sportsmen and American entertainers and performers of varying abilities who may or may not have had any relevance to the country whose name appeared on the stamps which featured them. A popular American president - Kennedy or Obama in particular - was more likely to appear on one of these Commonwealth stamps than was the British monarch whom these countries continued to recognise as Head of The Commonwealth even if she was no longer their head of state. Unpopular American presidents however rarely made it to the designs of such issues - Richard Nixon or George W Bush just did not seem likely to sell well and add to the philatelic agents' profits!
The "celebrity" issues in particular seemed to sell well, and apparently still do, although some of the designs lack any dignity and really ought to be an embarrassment to the countries which allow their names to appear on such issues. The issue from Ghana depicted below which shows a pouting Marilyn Monroe, Kennedy's mistress, seems wholly inappropriate and the set from Tuvalu on the utterly banal subject of "The Three Stooges", some American comedy performers, does little to suggest that American culture is worthy of being depicted on the stamps of foreign countries. 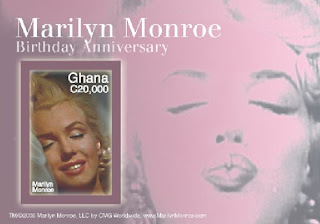 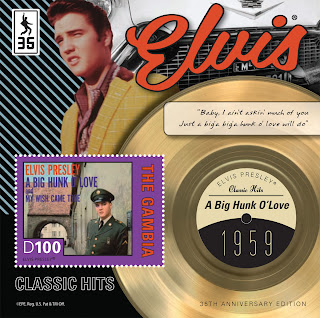 The very widespread depiction of American cultural and political subjects on stamps of other countries to whom the subjects mean little or nothing at all can be viewed as philatelic cultural imperialism. Whether it is any worse than the florid depiction of Queen Empresses and King Emperors which preceded it is questionable although it is to be noted that the New York-based philatelic agency is still happy to depict members of the British Royal Family on the stamps of its client territories on a regular basis but probably not so much to honour them for their position as members of the family of the British Head of State but more because of their role as "celebrities" in their own right - the unceasing philatelic appearances of the late Diana Princess Of Wales is evidence of this.
Yet it is more likely that the only reason that these subjects were, and continue to be, used on international stamp designs is because they sell well to the large US philatelic market and increase their producers' profits rather than represent a manifestation of US cultural imperialism. 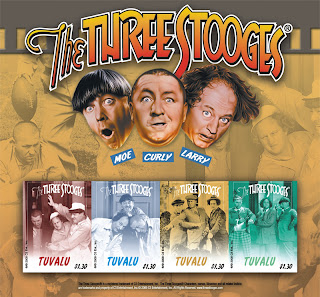 And so, I return to the recent trend whereby The People's Republic Of China has made great efforts to persuade as many countries as possible to release joint issues with it which celebrate links between it and the various countries involved. In many cases, it actually provides the stamps to the territories as a gift to ensure such an issue will be made. At least the designs are generally more dignified than the US culture-based issues I have described and strive to show a link between China and the country in question. Pandas and The Great Wall of China frequently feature on such designs.
China certainly recognises the usefulness of stamps as propaganda for establishing links with a country - in previous blogs I have mentioned the 3 sets of stamps produced and donated by China to the new country of South Sudan (though not entirely successfully since 1 stamp of the first issue depicted an incorrect version of South Sudan's coat of arms and the second issue seems not to have actually been released in South Sudan) and China seems to have donated other issues to some other countries such as stamps relating to the 2008 Olympic Games in Beijing and the peonies sheetlets of 2009.

Sri Lanka was just one of the numerous Commonwealth countries which have released a "Diplomatic Relations" issue and a few of the others are depicted below:- 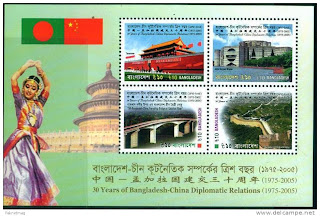 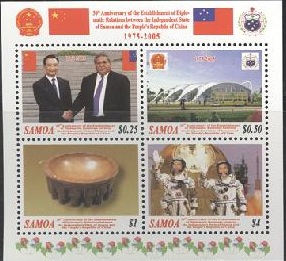 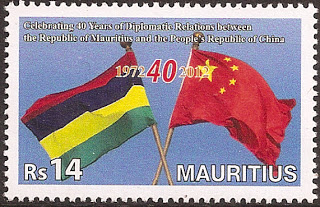 So numerous are these issues that this all feels like a new form of imperialism - a sort of imperialism based on philatelic propaganda. However it does not always work since some countries have found themselves courted by Taiwan, China's bête noire, usually with financial assistance as the underlying factor, and these have been persuaded to issue stamps which celebrate their diplomatic relations with Taiwan rather than The People's Republic (see below).
Of course, it is possible to put an alternative spin on all these issues and say that this is really a philatelic form of social networking at the level of countries and that the Chinese use this method to show how many "friends" they have got and who they are. Somehow, though, I still feel that these are modern versions of the "Imperium" productions of the late 1800's.