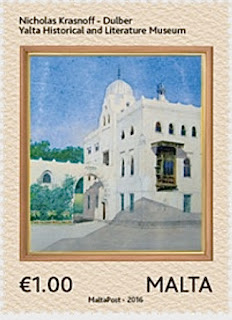 The Gibraltar-based agency, WOPA, continues to feature on the MaltaPost section of its internet sales site, a disgraceful stamp to which this Blog drew attention in 2016 (see Blog 761). The stamp was part of a pair released as a joint issue between ‘MaltaPost and Russian Post’ to ‘celebrate their countries’ longstanding relations’. 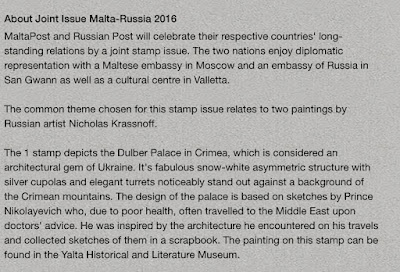 The issue features two paintings by ‘Russian artist Nicholas Krassnoff’, one of which depicts the Dulber Palace in Crimea, a region of Ukraine, which was invaded and occupied by Russian forces at the orders of the increasingly megalomaniacal Russian President, Putin. Putin subsequently illegally annexed the Ukrainian territory to Russia in 18 March 2016. Just a few weeks later, on 24 May 2016, Malta Post issued the stamp which was designed by Marka, the Russian Post Office, clearly duped by the Russian authorities into depicting a scene in Ukrainian territory as though it was part of Russia. There was a mild kerfuffle in Malta at the time after this Blog drew attention to the way the authorities in Malta, a member state of the European Union and of The Commonwealth, had fallen into the clever Russian trap of apparently recognising, if only philatelically, that Crimea was part of Russia and not Ukraine but eventually the affair was viewed as not having any significance. 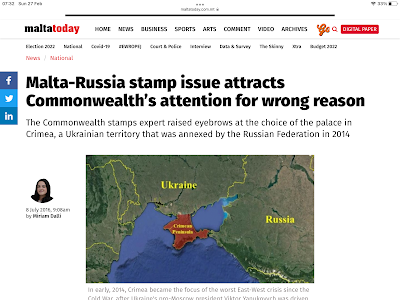 Everything that Putin does, and has done, has significance even if it is only the clever manipulation of the postal service of a member state of The European Union which results in one of its stamps giving tacit recognition to Russian ownership of Crimea.

Now we see that Putin’s long game played against Ukraine has finally boiled over to full scale invasion of the whole of that innocent, peaceful, democratic country whose only crime was to be Putin’s next door neighbour. And we are seeing the deaths and destruction which result from the Russian tyrant’s increasingly mad obsession with restoring The Russian Empire and Soviet Union. And now there are scenes which remind us of Hitler’s invasion of Czechoslovakia and Poland. The West has been pathetically weak in its response to his actions for years and with a particularly weak American President in office there can be little hope that Ukraine can be saved despite the valiant efforts of its President and people to repel the aggressors. If Ukraine falls, who can consider themselves safe while Putin remains Tsar?

Meanwhile, a gesture of disapproval, which of course will not benefit the unfortunate Ukrainians in any way, would be for WOPA and MaltaPost to finally withdraw from sale the appalling stamps which ‘celebrate’ Malta’s close friendship with Russia.

Better still,  postal services of those nations which admire the courage of the Ukrainian people might choose to rush out postage stamps acknowledging the free world’s solidarity with the brave Ukrainians and their repulsion at Putin’s behaviour. In practical terms, no philatelic response to the vicious Russian invasion can help the Ukrainian people but an issue of stamps, with its accompanying publicity, by well-wishing friends might help to reinforce their resolution to fight the invaders. And besides, various Russian regimes - Tsarist, Communist, Kleptocratic - have known how to use postage stamps as a practical form of propaganda and the post offices of the Free Nations could learn a lesson or two from them.

In conclusion - once more - WOPA and MaltaPost STOP selling these 2016 stamps which you were duped into marketing 6 years ago. 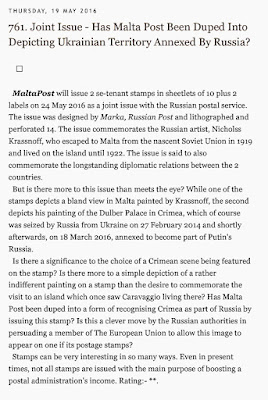 Just to show that stamps really can have an impact here’s a remarkably apt and meaningful Tweet just posted by Linn’s Stamp News. For the map of Austria substitute that of Ukraine. Replace the Hitler mask with one with Putin’s face on it. I hope WOPA and MaltaPost take notice. 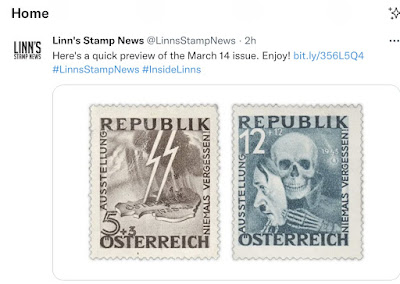