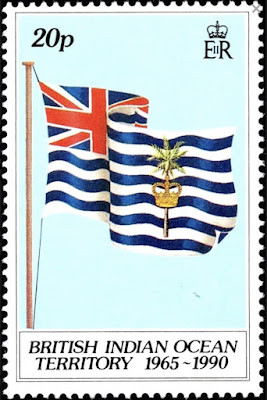 🇮🇴 There have been new developments in the ongoing Gilbert and Sullivan-like saga in which two Commonwealth members are at loggerheads with each other over the sovereignty of the Chagos Islands in the Indian Ocean which make up the British Overseas Territory of British Indian Ocean Territory, uninhabited islands - though inhabited until the British Labour government expelled the inhabitants in the 1960s to enable the building of an enormous military base on the largest island of Diego Garcia - which have been under British rule from 4 May 1786 when a British expedition of the East India Company, including the ships Admiral Hughes, Drake, Viper and Experiment, carrying Richard Price as Resident of Diego Garcia ‘took formal possession of Diego Garcia and all its dependencies in the name of King George III for the use of the Honourable Company”.

Some Frenchmen were on Diego Garcia at the time and drew the colonisers’ attention to their presence but the British chose to ignore their protest noting that the French presence there amounted to no more than “a dozen huts of the meanest appearance”. However the British doubted that a new colony on the island would have little chance of viability and accordingly the Bombay Council decided in August 1786 “to withdraw the settlement from Diego Garcia” and in October of that year the British settlers which included bricklayers, carpenters, coopers, butchers, bakers, doctors and tailors as well as soldiers, all departed from the island leaving a British survey ship under Lieutenant Archibald Blair to finish its mapping of the Chagos Islands. 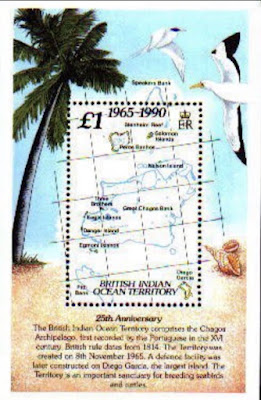 The French then turned up and left a stone claiming the islands for France and later French businesses set up on the island to establish a copra industry. Soon afterwards Britain and France found themselves fighting each other in the French revolutionary and Napoleonic wars and the British captured Mauritius, Rodrigues and Reunion which were surrendered by the French on 3 December 1810 with the capitulation stating that it applied to “The Isle Of France (Mauritius) and all its dependencies to the arms of His Britannic Majesty”. Diego Garcia and Chagos are not named in the capitulation but British sovereignty over them is deemed to have been reasserted since then. This was confirmed by The Treaty of Paris of May 1814 which ceded “Mauritius and all its dependencies … to the dominion of the British Crown”. Note that all the territories taken to include Chagos were ceded to the British Crown and not to Mauritius and that Chagos, though not named, was deemed to be a dependency of Mauritius and not an integral part of it.

As territory ceded to the British Crown in 1814 then, the British government with the assent of the monarch, was entitled to establish The Chagos Islands as a separate territory rather than a dependency ruled from, but not by, Mauritius (2158 km distance from Diego Garcia) which is what happened with the establishment of the BIOT on 8 November 1965. Initially they were combined with islands such as Aldabra and Farquhar which had been an integral part, not a dependency, of the colony of Seychelles but these were returned to Seychelles on 28 June 1976 when the islands became an independent republic within The Commonwealth.

In recent years the now independent Republic of Mauritius, has found the idea of possession of the Chagos Islands to be an attractive prospect because of the vast amount of potentially lucrative fishing that could be carried out in the area boosting the republic’s revenues enormously. Unfortunately another Commonwealth republic, Maldives, has its eyes set on the same target and so it has become vital for Mauritius to firstly claim the islands and their surrounding seas as part of the Republic of Mauritius and secondly to obtain international recognition for its claims which the international community has generally found it convenient to do. Hence, as reported in Blog 1492 the International Court supported Mauritius in its legal action to claim Chagos and then, as philatelists know well, the Universal Postal Union announced preposterously that only stamps of the Republic of Mauritius may be used on mail originating in Chagos even though no Mauritian post office exists in the islands.

The next significant act by the Mauritian government to draw attention to its claim on Chagos has been taking place over the past few days whereby a Mauritian ‘scientific expedition’ has visited the islands taking with it Mauritian government ministers and lawyers and members of the press as well a few of the descendants of some of the unfortunate Chagossians who were so appallingly treated in 1965 when they were expelled from their homes. The ever-cynical press had a merry time recording the moving and emotional arrival of the Chagossians on the island of Peros Banhos, filming them on heir knees kissing the sand as they landed on the island and as they visited the derelict buildings which their parents and grandparents had so cruelly been forced to abandon 57 years previously. One woman returning for the first time since she was expelled from her home as a child recounted the way she had been forced to leave and that her dog had been shot by those involved in the eviction. The expulsion of the innocent Chagossians was undoubtedly one of the most disgraceful acts of any British government in modern times.

Having got maximum gain from the telling of the Chagossians’ sad stories the Mauritian officials then went on to claim Chagos as part of the Republic of Mauritius and underscored the point and gained maximum propaganda points by raising the Mauritian national flag for the first time ever on Peros Banhos itself. Of course, if they had been really clever, they would have taken a table with them with some envelopes, Mauritian stamps and a canceller and claimed it to be the first Mauritian post office in Chagos and prepared special covers with a ‘Peros Banhos, Republic Of Mauritius’ postmark -imagine the publicity that would have received. 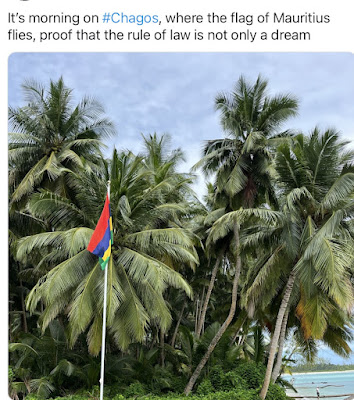 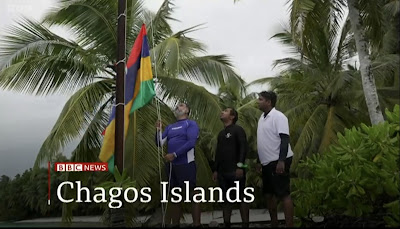 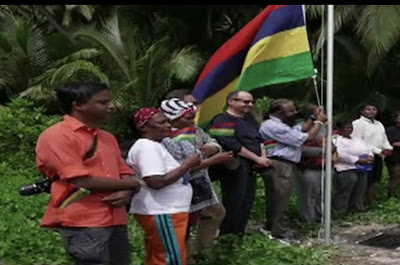 Doubtless all this melodrama will eventually lead to real philatelic consequences. I expect that BIOT stamps will continue to appear though presently it seems that the British government and its agents there may be holding back from releasing more new issues for the foreseeable future to allow the heated atmosphere of Anglo-Mauritian relations to cool down. In the meanwhile the unfortunate Chagossians have once more been used by parties with their own particular interests which rate higher to them than the continuing distress of the Chagossians.

🇬🇦 Meanwhile more news which may affect what appears in an ongoing collection of Commonwealth stamps. As reported in Blog 1938, President Ali Bongo Ondimba of the Francophone African state of Gabon who has been on poor terms with the French government in Paris, stated in 2021 that he is intending to take his country into membership of The Commonwealth. He reinforced this intention by announcing in a locally televised speech on 3January 2022 that “Gabon will become the 55th member of The Commonwealth in 2022”. He clearly expects the country’s membership to be approved at the twice delayed Commonwealth Heads of Government Conference (CHOGM) scheduled now to be held in Kigali in Rwanda during the week of 20 June 2022. 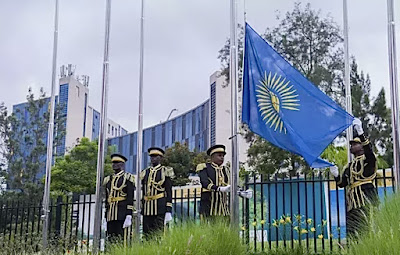 In his speech President Bongo stated that “This is a major turning point for our country” and that joining such a multi-cultural group would be “promising” for Gabon.

From the philatelic point of view, adding Gabon to a Commonwealth collection would not pose too much of a problem since its  postal service generally pursues a highly conservative new issue policy 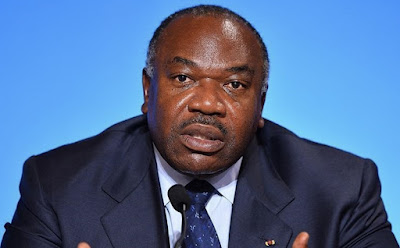