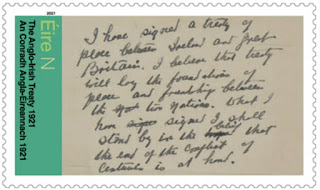 🇮🇪 An Post, the national postal service of the Republic Of Ireland issued a pair of stamps on 2 December 2021 to commemorate the signing of the Anglo-Irish Treaty on 6 December 1921 between the British government and Irish rebels which saw the formal end of the Anglo-Irish War and was to lead to the Irish civil war and one year later, to the establishment of the Irish Free State which saw an independent Southern Ireland take on the status of a Dominion within The British Empire. In terms of the significance of subjects depicted on postage stamps this issue is one of the most notable of the year. 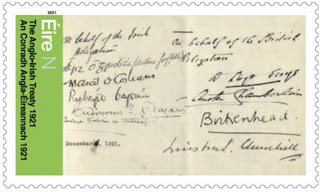 The agreement was signed in London with the British government delegation being led by the prime minister Lloyd George and including Austin Chamberlain (winner of the Nobel Peace Prize, son of the great former mayor of Birmingham, Joseph Chamberlain, and brother of the future prime minister, Neville Chamberlain), Winston Churchill (the future prime minister) and Lord Birkenhead. The signatures of the Irish rebel delegation included those of Arthur Griffith (founder of Sinn Féin) and Michael Collins, a rebel military leader who himself was assassinated in an ambush by Irish anti-Treaty forces in mid-1922. The signatures on the Treaty are depicted on one of the stamps.
The second stamp depicts part of a message written by Arthur Griffith soon after the signing of the Treaty.
This fascinating issue was designed by Ger Garland and the self-adhesive stamps were lithographed by Enschedé. Rating:- *****.
🇯🇪 On 6 December 2021 Jersey Post will issue its 6 Jersey Crest Post and Go stamps its an additional inscription, ‘Celebrating Our Finance Industry’ to commemorate the 60th anniversary of that particular important contributor to the Jesey economy. The stamps will be dispensed from kiosk JE02 at the Broad Street post office in St Helier until 16 December 2021.
🇮🇳 India Post issued a single stamp on 1 December 2021 to commemorate the 75th anniversary of the Mahindra Group, described as ‘an Indian multinational conglomerate company headquartered in Mumbai … It has operations in one hundred countries … considered to be one of the most reputable Indian industrial houses with market leadership in utility vehicles as well as tractors in India.” Rating:- **.
Posted by White Knight at 02:48