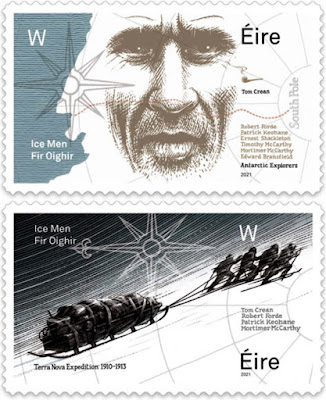 An Post, the postal service of The Republic of Ireland issued an interesting set of 4 self-adhesive stamps on 15 April 2021 titled Ice men, featuring Irishmen who have been involved in historic Antarctic exploration. This fine issue was designed by Zinc Design using illustrations produced by David Rooney and was lithographed by Enschedé. Rating:- ****. 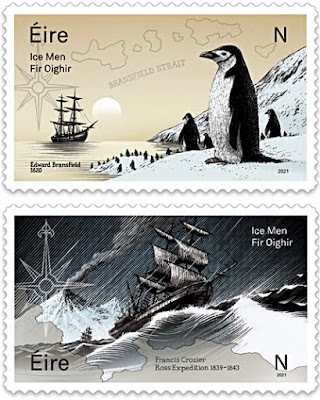 🇸🇬 The set of 4 stamps to be issued on 23 April 2021 by Singapore Post depicting tetra fish and described as ‘high values’ will be accompanied by an excellent ‘Collectors’ sheet’ containing the 4 stamps. It is pleasingly colourful and original and was designed by Leo Teck Chong. Rating:- *****. 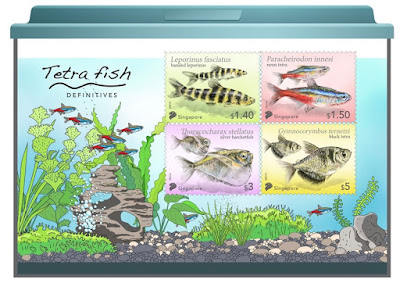 🇨🇰 On the subject of fish, I came across an article published in Linn’s Stamp News on 6 October 2020 which highlighted a mystery stamp of which 3 used specimens (postmarks all unreadable) had been found over a period of years always in kiloware. The stamp, a 15c value from the 1992 - 94 definitive series surcharged 10c, was otherwise unknown and Linn’s Stamp News was not able to find out any more information about it; none of the major catalogue editors had reported its existence, the postal authorities of Cook Islands were unable to give any information about it and the present agent for Cook Islands stamps, Philatelic Collector Inc., following some enquiries, was also unable to enlighten the writer of the article any more about the stamp. Does anyone else have any information about this item?
On the surface of it, the very low face value of 10c makes it highly unlikely that this was an item worth forging and it’s hard to believe that the need for postage stamps  in Cook Islands was so great that a forgery intended for use on mail would have been worthwhile as very little money would have been saved by using it for postage rather than using a genuine stamp (besides, surcharging a 15c stamp 10c represents the loss of 5c which is hardly sensible). Surely it must represent a local response to an acute shortage of 10c values which were needed for some reason or another.
A new definitive series depicting butterflies was introduced in 1997-98 so one might expect any shortages of a value after that date would result in one of those values being surcharged but of course there may have been a surplus of the fish stamps available for surcharging. However, we must remember that Linn’s Stamp News reports that the Cook Islands Post Office told it that has no record of these surcharges having been produced.
Fascinating. Fake or unrecorded genuine surcharge produced to meet the needs of an acute 10c value shortage? With often unreported examples of surcharges and overprints emerging in the last few years from various territories I have the feeling that this is a real stamp and someone will know the answer to the questions of why and when it was issued. 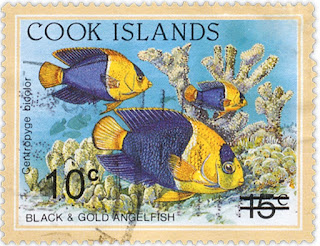