1864. 🇺🇸🇬🇮 No Let Up From IGPC, Gibraltar To Issue Cryptocurrency ‘Stamp’’.

🇺🇸 The United States-based company, IGPC, which dignifies its existence by using the term ‘philatelic agents’ continues to excrete philatelic products on to the new issue market. None of them are worth wasting time in illustrating here and I also now choose not to list them in detail which is in line with how I treat the philatelic products of the Lithuania-based company, Stamperija. The less publicity they receive the better.

🇬🇮 Sometimes I feel I am becoming increasingly detached from the way the world is progressing. Take cryptocurrency for instance. I have not felt any great need to take any interest in it and, having just perused Wikipedia and other information sources on the subject, I really don’t get it all. There are all sorts of terms and acronyms associated with it that I know I’m not going to be able to come terms with but, certainly at present, I don’t feel any anxiety that my life is any the poorer for ignoring the subject.

But now I find that social media sites and other internet features are getting terribly excited about the announcement by a company called Coinsilium that it has co-operated with the Royal Gibraltar Post Office’s greedy little philatelic service to produce the first Bitcoin stamp which will be sold in a presentation pack that will offer the buyer the opportunity to buy 2 non-fungible tokens (nfts) which will be delivered online to them in a pack containing randomly inserted items of varying rarity (and logically they claim, of varying value which could even be nfts of ‘mythic’ rarity). Collectors will be able to preorder the ‘postage stamps’ from 19 April and they will go on sale on 17 May 2021 which is in the same week as the day known as Bitcoin Pizza Day (the anniversary of 22 May 2010 when the first ever purchase - of a pizza - was made using cryptocurrency). If this all sounds like a late April Fool’s Day stunt, it isn’t. Being too worn out by reading about IGPC’s latest nonsense as well the Gibraltar Philatelic Bureau’s newest philatelic gimmick has lead me to supply the rest of the information by screenshots of internet information rather than writing it all myself:- 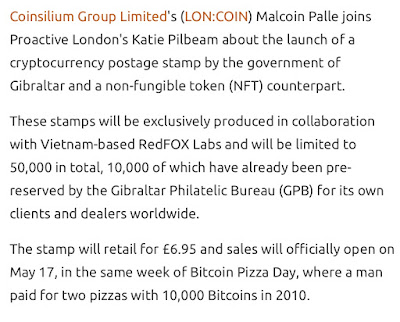 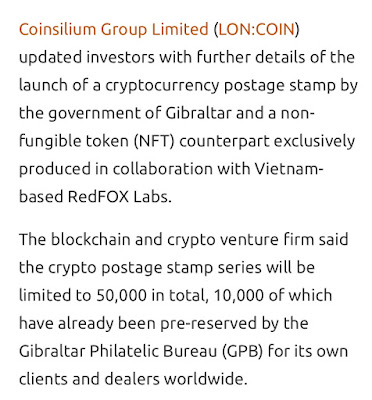 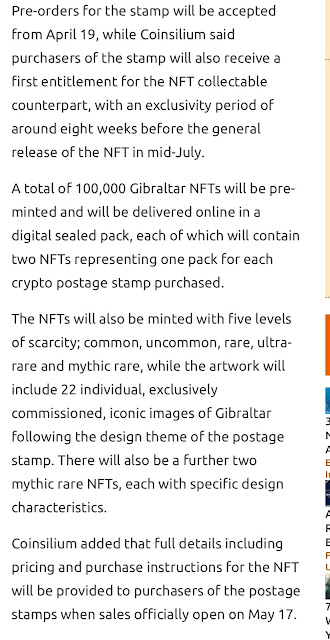 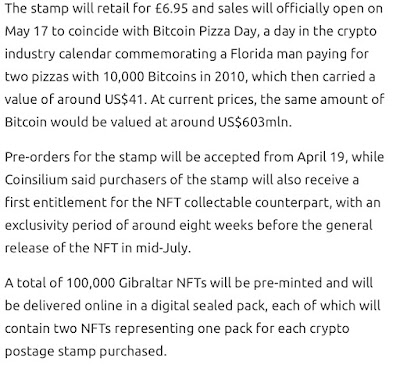 It is all very bizarre. The purchase results in the possession of 2 virtual items which exist only in the digital world and have no substance. Apparently this extraordinary way of spending money is already a feature of the market in art and works of art which exist only digitally have been bought for hundreds of thousands of dollars by very rich people who want to have the cachet of owning such insubstantial items and have far too much money for which they can find any other use.

The Gibraltar ‘stamp’ which opens up the right to order these virtual items is to be sold in a presentation pack and the ‘stamp’ appears to actually be a miniature sheet containing two stamps judging by this poor quality photograph I have managed to take:- 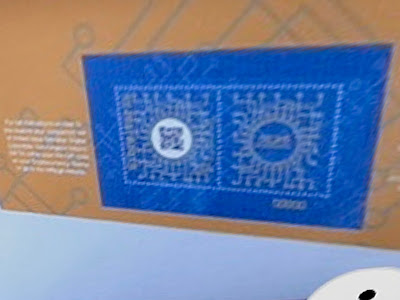 The 24 nfts (including the 2 ‘mythic rare’ items) depict views around Gibraltar including the Moorish Castle:- 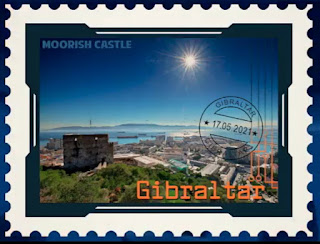 Perhaps this is the future? Well just think about this, this ‘piece of art’, (an animation featuring a cartoon cat trailing a rainbow), sold for 300ETH (digital currency equivalent to US$600000) in 2021. We can all view it but the value comes from owning the original nft which acts as a digital certificate of ownership. Is someone being taken for a ride? As I say, is this the future? 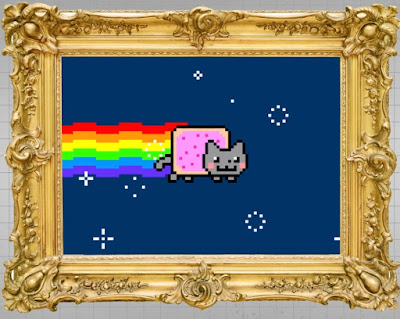