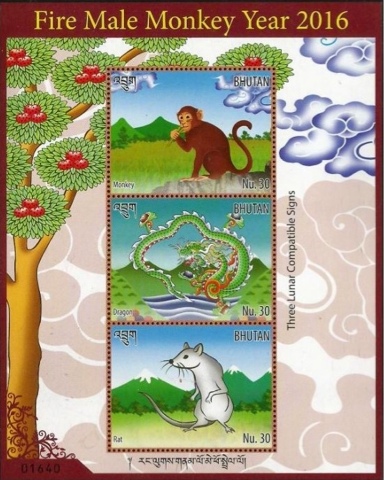 On 5 February 2016 Bhutan Post issued a sheetlet of 3 different stamps and 1 miniature sheet to commemorate the lunar new year. This issue tells the collector a little more about the subject than most issues which have been released in the flood of Year of the Monkey-related issues which has taken place since the closing months of 2015.
Firstly we learn that this is not just the Year of the Monkey but is actually the Year of the Fire Male Monkey. Secondly, the issue tells us that the 2 other signs of the lunar zodiac with which the monkey is compatible are the Rat and the Dragon. Finally the miniature sheet is titled "the Four Harmonious Friends" and depicts a bird, monkey, rabbit and elephant and I guess that this must be an illustration of a traditional story. As usual with recent issues from Bhutan, an issue of local relevance and attractiveness. Rating:- *****. 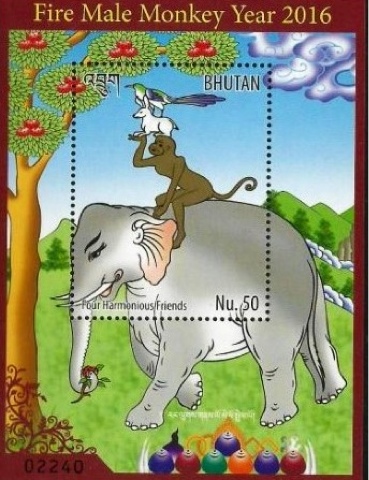 The first issue of 2016 to be released on 10 March by Cyprus Post will be a pair of stamps on the subject of "Traditional Cypriot popular crafts". The set was designed by Nicos Ierodiaconou and lithographed by Giesecke and Devrient Matsoukis SA. Rating:- ***. 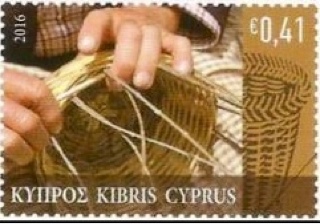 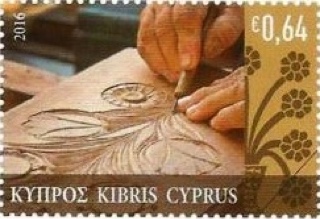 Cyprus Post will also issue a single Cyprus Refugee stamp tax stamp on 10 March 2016.
In Blog 710 I mentioned the issue due to be released by Australia Post on the subject titled "Fair Dinkum Aussie Alphabet". I have only a very vague idea of what that title means but I now include below better illustrations of the 5 stamps and of the 5 booklets which will all be issued on 1 March 2016:- 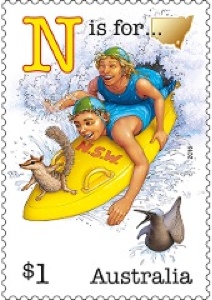 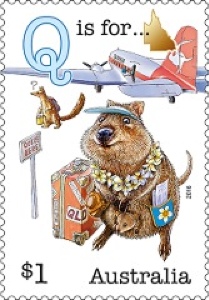 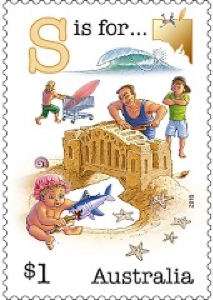 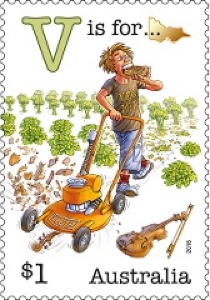 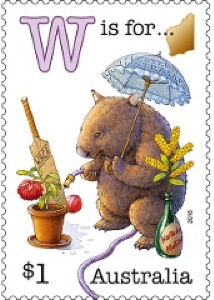 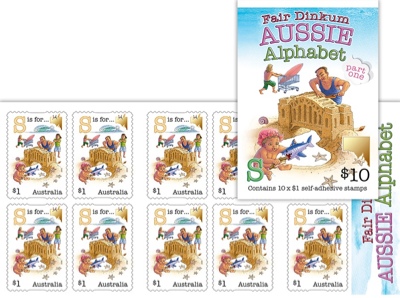 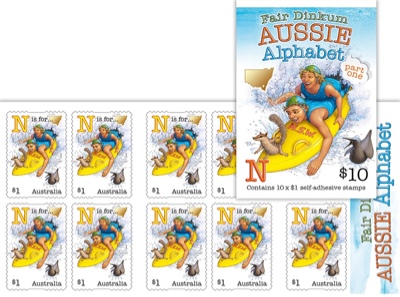 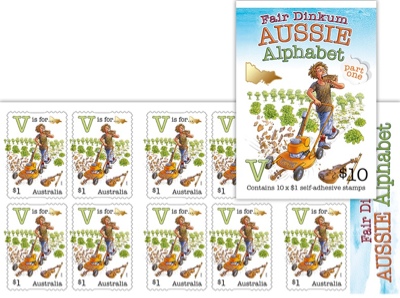 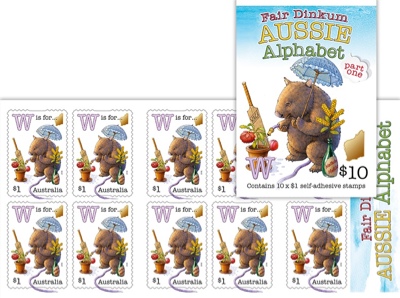 I like new stamps which reflect contemporary history as it is happening. In Blog 424 I highlighted the history of Iraq as reflected by its stamp issues from the beginning of British occupation in 1914 until Britain gave up its League of Nations Mandate in 1932 and then onwards through the Gulf Wars to the pair of stamps issued in 2012 to commemorate the 1st anniversary of the evacution of US and British forces from the country after their sustained periods of Allied occupation.
The Iraq postal administration has now issued a very interesting set of 3 stamps to commemorate the Iraqi forces' successes in their war against the so-called Islamic State (see Blog 601). The 500 dinars stamp commemorates the relief of the town of Amerli in northern Iraq which was attacked by ISIS forces in June 2014 and eventually relieved by Iraqi Army, Shi'ite and Peshmurga forces, supported by US air attacks, on 31 August 2014.
The 750 dinars stamp commemorates the Iraqi Army attack on the ISIS-occupied Baiji oil refinery on 18 November 2014. The attack was supported by RAF bombing of buildings occupied by ISIS forces. Subsequently the Iraqi forces retook and then again lost the town of Baiji and in early 2015 a further campaign, with notable RAF air support, began to retake the town. It was not until mid October 2015 that Baiji town and refinery finally fell into Iraqi government hands.
The 1000 dinars value commemorates the liberation of the central Iraq town of Jurf Al-Neser in October 2014 by the Iraqi army and Iranian-backed Shia militia after ISIS forces had seized the town in July 2014. The liberation followed a 2 day campaign and it was said that 498 ISIS militants were killed during the battle.
The set was issued on 16 April 2015. 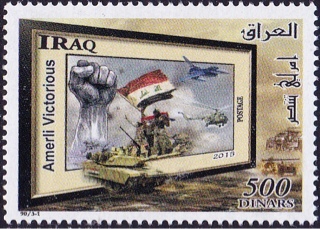 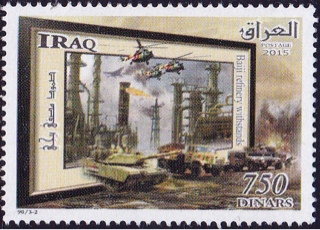 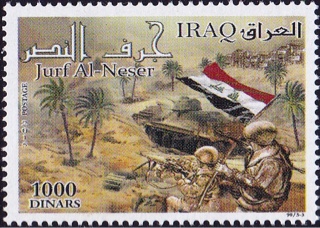 Earlier in 2015, Iraq Post had issued a set of 4 stamps to commemorate Army Day which commemorated the forces which were fighting the ISIS militants:- 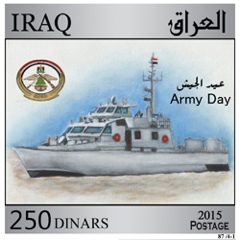 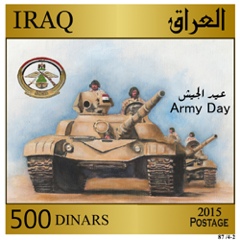 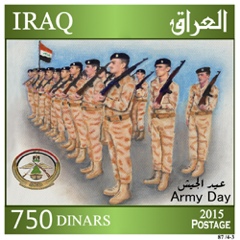 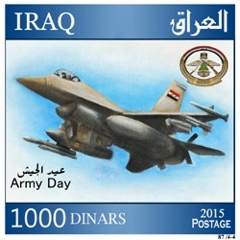 Meanwhile, the Libyan Post Company issued a set of 3 stamps on 17 February 2016 to commemorate the 5th anniversary of the "Liberation" (see Blog of 26 July 2012). Since the events of 2011which led to the downfall of Gaddafi, the situation has gone downhill in Libya with multiple factions taking control of various areas of the country so I presume that these latest stamps will not be available in all parts of Libya. Most importantly, so-called Islamic State has moved into an area in northern Libya and poses an increasingly serious threat. 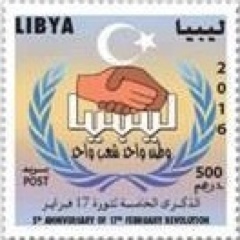 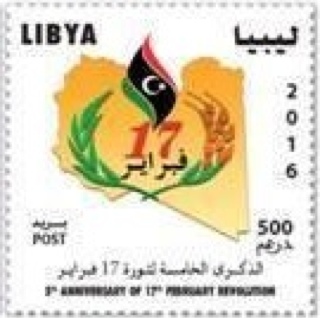 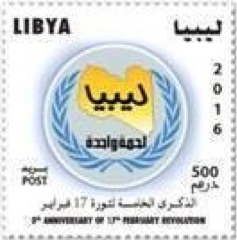 Finally to another troubled former Commonwealth country, The Gambia, which was removed from its Commonwealth membership by its tyrannical ruler, President Sheikh Professor Alhaji Doctor Yahya AJJ Jammeh, because he did not feel that the country should ever be a member of a "neo-colonial institution" and that The Gambia "will never be a party to any institution which represents an extension of colonialism" (see Blog 310). Despite this strong conviction of the President, The Gambia's postal administration is perfectly happy for the US-based philatelic agents, IGPC, to continue to produce philatelic items with the country's name printed on them which depict and commemorate the ultimate symbol of The Gambia's former colonial ruler - Queen Elizabeth II. Incredibly, one of The Gambia's latest stamp issues therefore commemorates the achievement of Queen Elizabeth II in becoming the longest reigning British monarch! What cynicism! What a cheek! 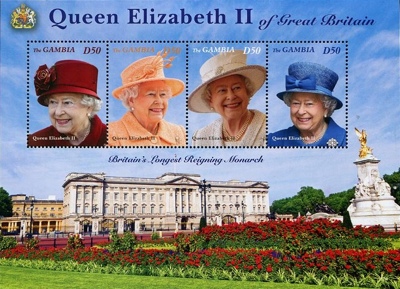 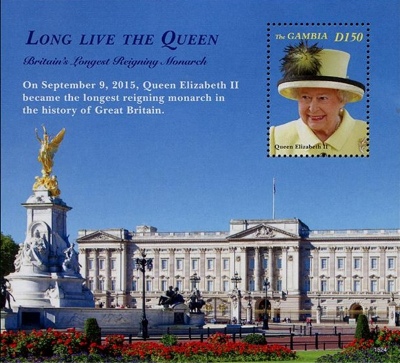