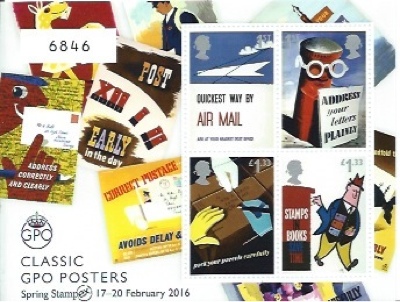 Of course, it doesn't help that I dislike going to London so much. It's such a horrible, claustrophobic city full of people with no time to spare and completely unaware of other people's needs. Perhaps that is a rather jaundiced view of the place but holding such an impression of what seems like a very alien, self-serving place when compared with the rest of Britain, I find it very difficult to work up any enthusiasm to travel there even in the pursuit of my love of stamp collecting. But that indeed is just what I did yesterday to visit the Spring Stampex 2016 philatelic exhibition.
It was a journey I regretted. Stampex isn't what it used to be. Mid-Friday morning and the interior of the Business Design Centre was looking like a ghost town. A number of stalls had no prospective buyers perusing the items they had for sale (despite passing the German Post Office stand several times I'm pretty sure I never saw a single customer looking at its wares). Even stands which I remember in the past being almost besieged by customers hoping to obtain items for their collections seemed to only have one or two potential punters working their ways through stock books and I didn't see a lot of money changing hands.
A number of stands, especially on the upper level, looked more like stalls at a jumble sale - not at all attractive and not at all designed to draw the punters to them. There seemed to be far fewer dealers selling postal history items than I remember there being a few years ago and dealers selling new issues were thin on the ground though I was pleased to visit Nigel Haworth's stand and pick up a few recent issues which I had not yet obtained.
The Jersey/Guernsey and Isle of Man/Gibraltar stands in contrast seemed to have a steady flow of buyers but the "Post and Go" kiosks were very quiet when I visited them and there was no queue of buyers of these controversial items. The Royal Mail stand seemed to be well enough attended and while I have seen the stand much busier in previous years there nevertheless was a steady flow of buyers of the numerous items offered for sale. I imagine that Royal Mail will be satisfied with their sales if the activity I observed at its stand reflects the 4 days of the exhibition as a whole.
I was pleased to see that there were a few young people at the exhibition (well 4 or 5 anyway) but almost the entire number of customers were middle-aged or elderly men (I saw a woman looking for items that interested her but she seemed to be in a minority of one).
Stampex, like British stamp collecting in general, seems to be in terminal decline if my visit to the exhibition is anything to go by. There was so little of interest at the exhibition that I left feeling depressed, disappointed and rather annoyed that I had given up a day to go there as well as spending a not inconsiderable sum to travel there.
Stampex seems to be an allegory for the state of British stamp collecting - inactive, tired and in need of resuscitation.
About the only reason for spending money to go to any stamp exhibition in expensive London is to pick up the numerous exhibition souvenirs sold at the show rather than to have to pay the large mark-up which dealers necessarily have to add to their selling price to cover the costs of going to the place to obtain the items. And exhibition souvenirs are proliferating roughly in inverse proportion to the number of collectors attending the shows I suspect.
We therefore had a "limited edition" souvenir sheet (illustrated above) of which only a maximum of 7500 were to be sold in which the "Classic GPO posters" miniature sheet was additionally inscribed "Spring Stampex 17 - 20 February 2016". This "limited edition" sold for £7.50, did not seem all that limited to me but was only available from the Royal Mail exhibition stand and not from the philatelic bureau and so can be said to have had "limited availability". I was told that I could buy 10 sheets in one go so I imagine dealers had no problem filling the orders of their customers and limited or not there does not seem to be any reason why this item should have a large mark-up in selling-price since it is purely an exhibition souvenir rather than an item freely available to the general public for use on their mail and does not qualify for full catalogue status.
The other obvious items to buy were the "Post and Go" exhibition souvenir labels - from Royal Mail, dispensed from 3 kiosks, were "Collectors strips" of 6 stamps of various values (illustrated below) - the Machin Head with added inscription "500 Years of Royal Mail", the "Heritage Transport" set and a strip of 6 labels all depicting the Travelling Post Office train design from the Heritage Transport set:- 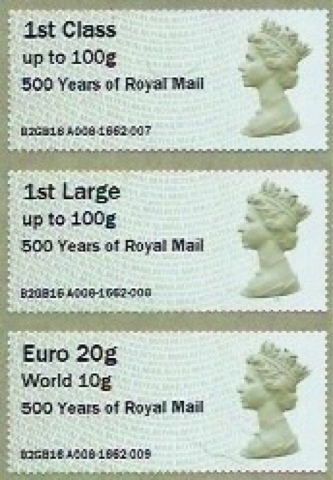 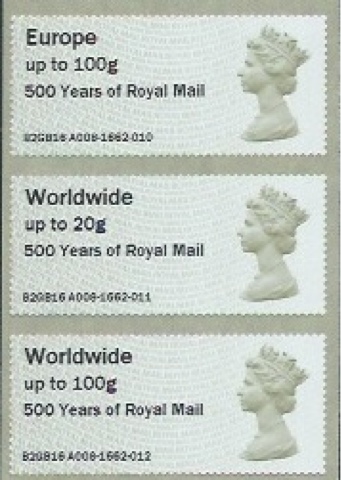 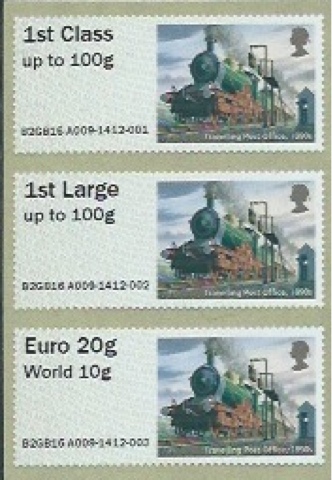 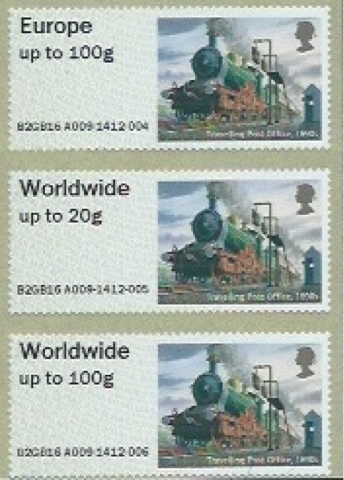 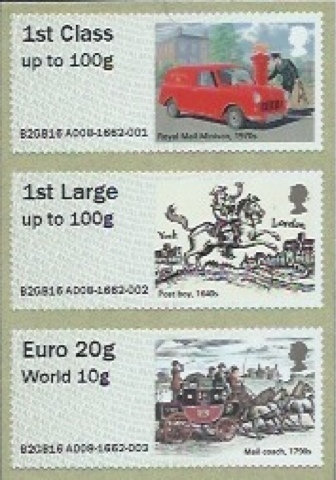 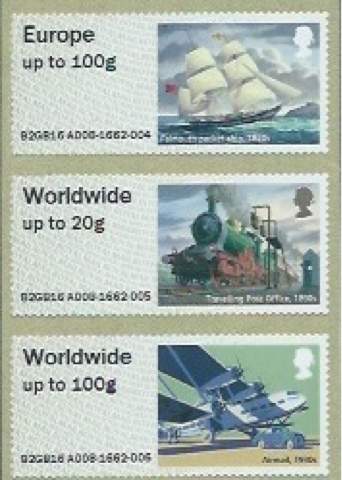 I depict next the "Heritage Transport" "Collectors' strip" dispensed from a NCR kiosk situated in the Pinfold Street post office in central Birmingham for comparison with the IAR kiosk-dispensed strip obtained at the Stampex exhibition:- 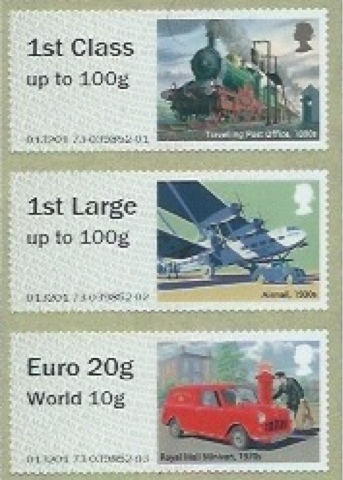 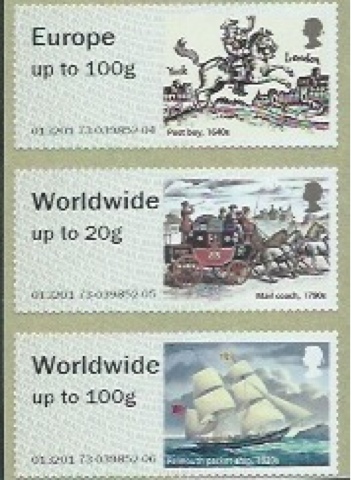 Guernsey Post dispensed 2 types of "Collectors' strips" from its kiosk - the new "Guernsey life" labels and the "Guernsey flag" labels with the added inscription "500 Years of Postal History" while Jersey Post's kiosk dispensed the new "Jersey Crest" labels and the "Jersey flag" labels with the "500 Years of Postal History" inscription.
The Royal Gibraltar Post Office kiosk dispensed strips of 4 labels in the "Gibraltar flag" design with the "500 Years of Postal History" additional inscription and 2 strips of four, as depicted below, of the new "Year of the Monkey" labels. If one is generous, it's possible to say that the 'monkey" design is of relevance to Gibraltar in view of its famous population of Barbary apes but I would have preferred it if the design had featured a realistic portrait of a Gibraltar ape rather than the stylised design which was actually used:- 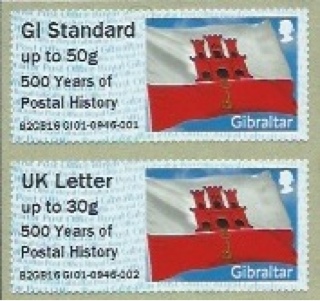 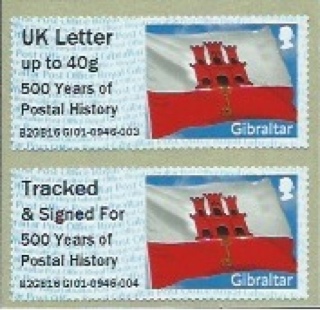 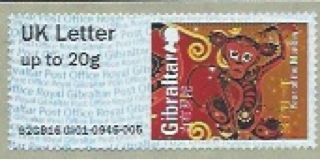 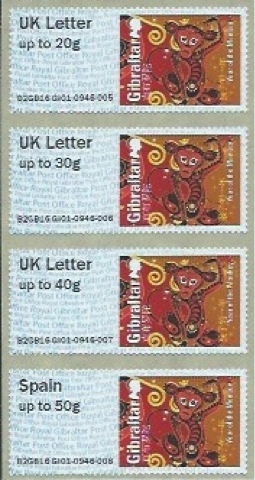 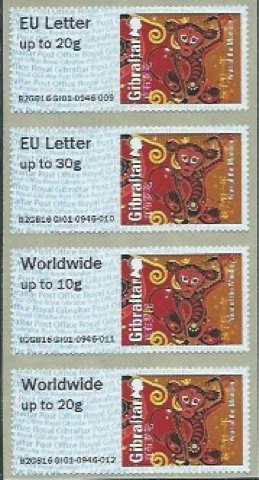 The Postal Museum had a stand at Stampex and was selling a pack of the "Heritage Transport" labels with the museum's new name inscribed on them as well as its new logo. I chose to buy the items on a special cover, as shown below, with the date 17 February 2016. I rather like the item which cost £9. 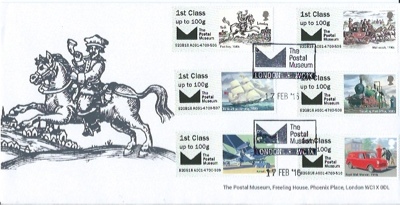 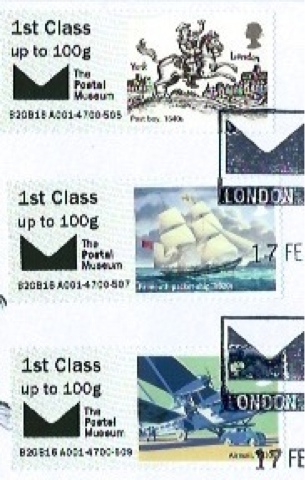 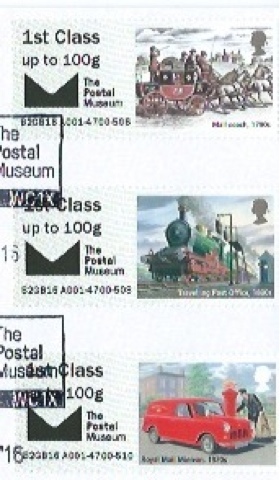 Royal Mail has made a good start to 2016 with its commemorative new issue programme especially in its choice of subjects which have all been worthy of receiving philatelic commemoration. The next worthwhile issue will be released on 15 March 2016 and will commemorate British Humanitarians. The 6 stamps were designed by Hat-trick Design and lithographed by Cartor. The people honoured by the set are Sir Nicholas Winton, Sue Ryder, John Boyd Orr, Eglantyne Jebb, Joseph Rowntree and Josephine Butler. Rating:-*****.

Stamperija's latest philatelic gems take the form of products which are a "Project in co-operation with  WWF" and are inscribed with the name of Solomon Islands. The products feature the Humpback Grouper fish and are numerous - a set of 4 in a miniature sheet as depicted below (perforate and imperforate), a single stamp miniature sheet, a sheetlet of 8 stamps (2 sets of 4 different stamps) - again both perforate and imperforate, a sheetlet of 16 (4 se-tenant strips of 4, in perf. and imperf forms), a "deluxe sheet" of 4 different stamps and 4 further "deluxe sheets", each containing a single stamp. I suppose we may conclude that this single issue is made up of 8 stamps and 9 miniature sheets/sheetlets. The stated date of issue was 30 November 2015. The total face value of it all is $488 (Solomon Islands currency) or £41.70p. Rating:- 0.
Who buys this stuff? Who can afford to do so? What pleasure do they get from it? 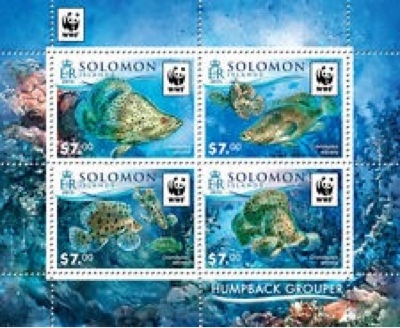 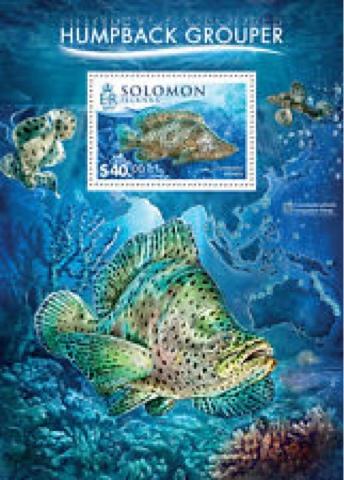 Stamperija has also released 10 "sheetlets", each containing 4 different "stamps", and 10 accompanying "miniature sheets" with the name of Sierra Leone printed on them. The stated "date of issue" is 21 December 2015 and most of the featured subjects relate to various sports:- Football (the Africa Cup of Nations), Tennis, Cricket, Table Tennis, Chess, Golf, Judo, Rowing, Marilyn Monroe and Joe DiMaggio and the 23rd World Scouting Jamboree. All items are sold in a "limited edition" of 1000. The total face value of this "issue" is Le488000 or £82.80! Rating:- 0. 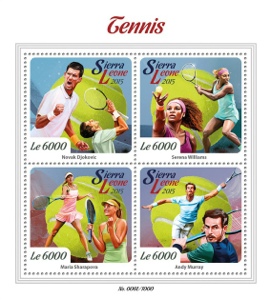 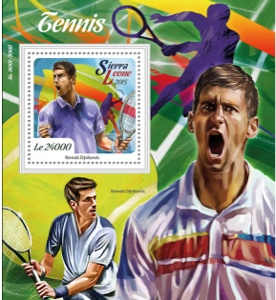 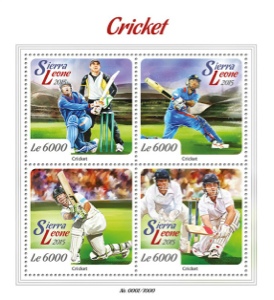 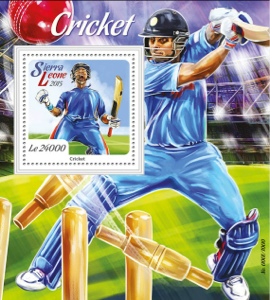