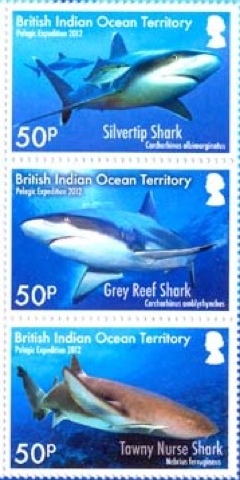 It's been a long time since the postal administration of British Indian Ocean Territory issued a new set of stamps (9 June 2014) but finally we have an excellent new issue in the form of a sheetlet of 6 x 50p stamps which feature sharks which swim around the expansive waters of the territory.
The issue commemorates the first "pelagic" or open water research programme which took place in the BIOT Marine Reserve between 20 November and 11 December 2012. The report of the study records that the expedition was impaired by bad weather generated by Cyclone Claudia. The expedition studied the large fish in the area, as indicated by the stamp designs, and also identified 21 seabird species in the area during the course of investigation - BIOT has issued many stamps featuring its bird species before.
Other than the date of issue which was 12 February 2016 I have no other details about the issue but it looks to me as though the stamps were probably designed by the ever excellent Andrew Robinson. Rating:- *****. 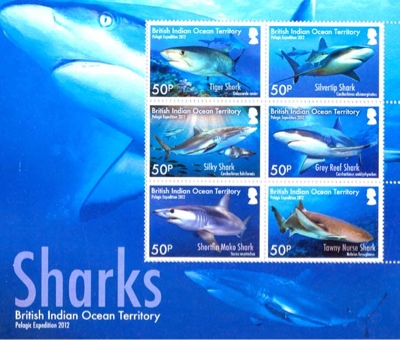 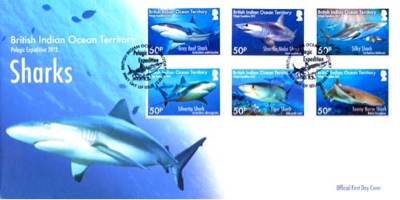 Sri Lanka Post issued a single stamp on 12 February 2016 to commemorate HR Jothiapa, a singer who made his name in the field of singing songs in films. The stamp was designed by Kumudu Tharaka and printed in lithography. Rating:- ***. 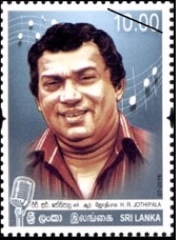 A further stamp was issued on 14 February 2016 to commemorate the centenary of the birth of the former President of Sri Lanka, the late DB Wijetunga. The stamp was designed by Sanath Rohana Wikramasinghe and printed in lithography. Rating:- ***. 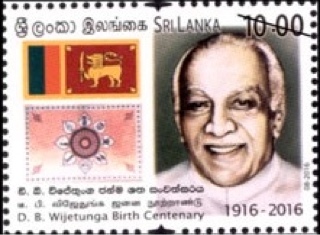 In Blog 709, I mentioned Jersey Post's issue of 6 stamps and 1 miniature sheet to be released on 9 March 2016 on the subject of "Queen Victoria's legacy" which will feature various portraits of her grandson, King George V. I included illustrations of the set of 6 and now depict the miniature sheet:- 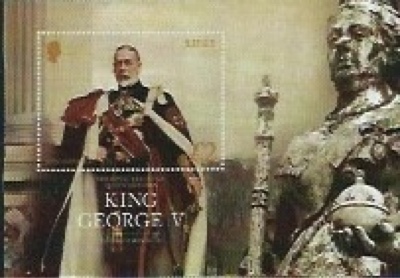 Up to now I have not illustrated the £16.36 "Prestige booklet"issued by Royal Mail on 17 February 2016 titled "500 Years of Royal Mail". There are 4 panes of stamps - 2 each contain 3 different stamps from the set, the third contains the GPO Posters stamps from the miniature sheet and the 4th contains the Penny black and Twopenny blue stamps issued in 2015 and the new Penny red stamp. The booklet was designed by Atelier Works and lithographed by International Securitu Printers. Rating:- *****. 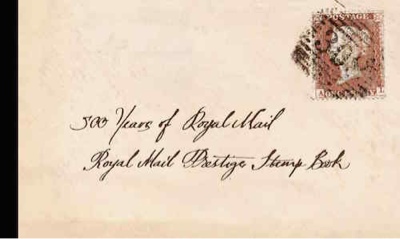 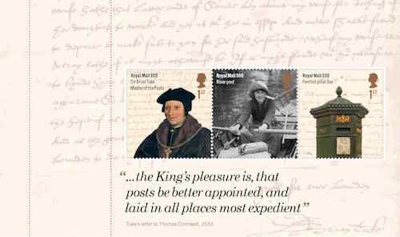 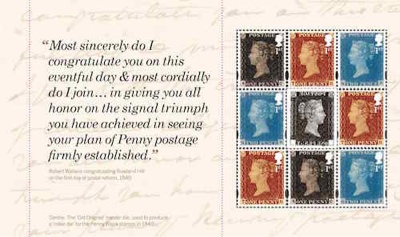 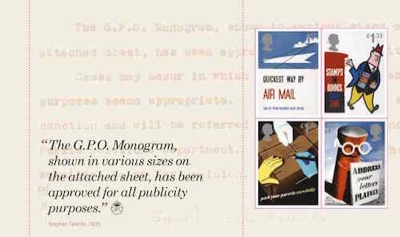 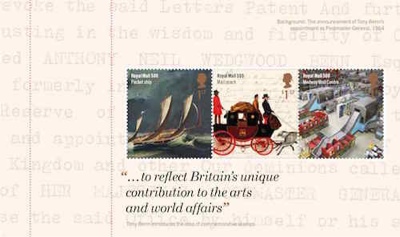 In Blog 713 I illustrated the Royal Mail and Royal Gibraltar Post Office "Post and Go" labels which were on sale at the Spring Stampex 2016 philatelic exhibition in London for just 4 days from 17 to 20 February 2016. Below I now illustrate the exhibition souvenir labels dispensed from the Jersey Post and Guernsey Post kiosks (JE01 and GG01) at the exhibition.
From Guernsey Post there were 2 "Collectors strips" - the "Guernsey flag" design with added inscription "500 Years of Postal History" and the newly issued and highly attractive "Guernsey life" labels (face value of each strip is £3.62 but the cost of each is £4.34 due to value added tax being applied). Jersey Post issued a "Collectors strip" of 6 "Jersey flag" labels with the added "500 Years of Postal History" inscription  and a strip of the newly issued "Jersey crest" labels (face value of each strip is £4.21 but the cost is £5.05 which includes VAT). For some reason Jersey Post always seems greedier than Guernsey Post. 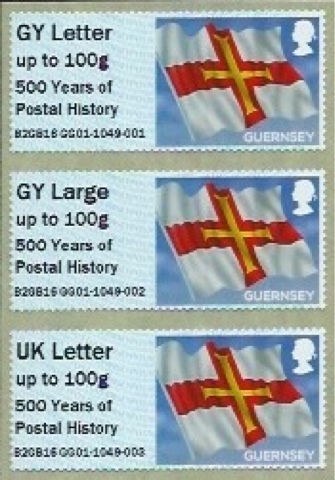 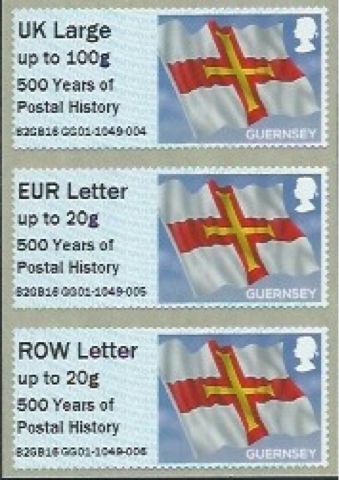 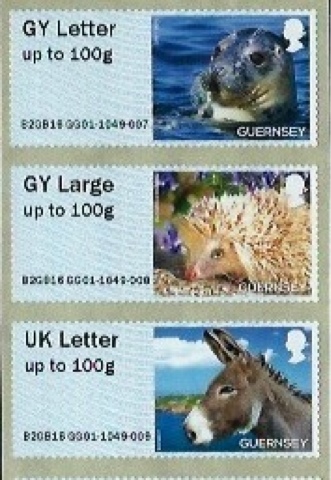 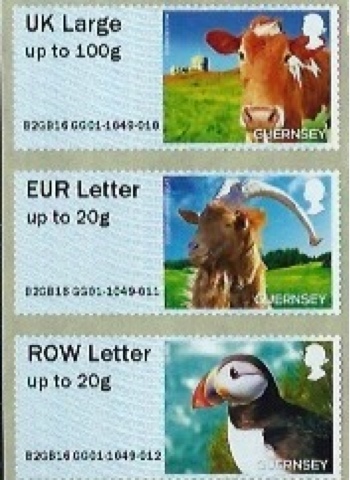 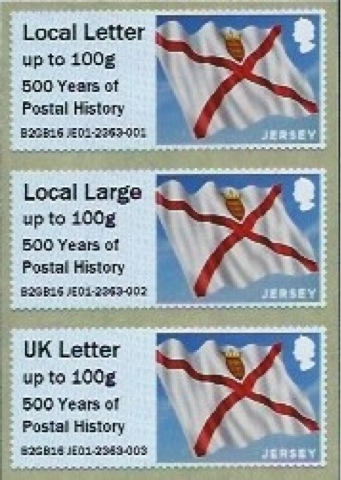 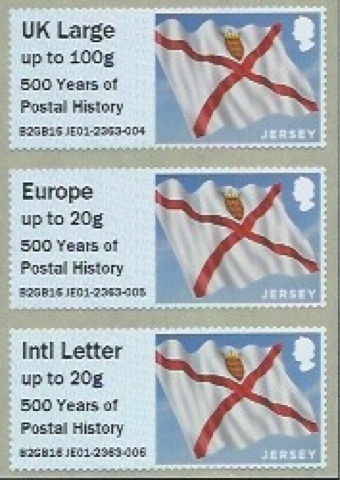 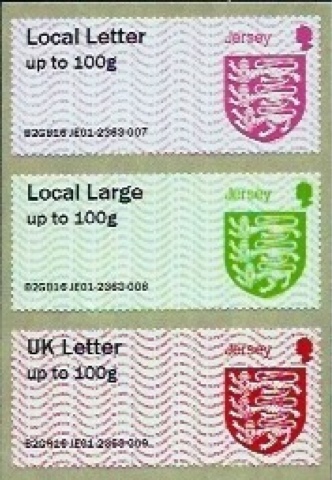 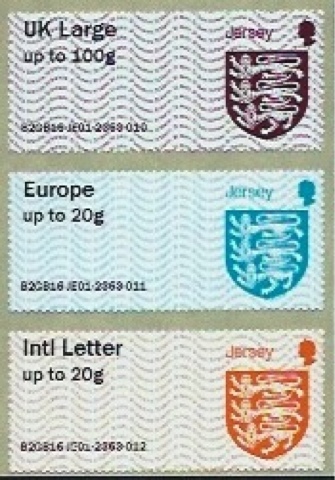