313. Middle Earth To Join The Commonwealth?

December will be with us in 6 or 7 weeks and that means that there will be yet another "Hobbit" film released in cinemas and yet another set of stamps issued by New Zealand Post in its interminable series of stamps which show scenes from the latest Hobbit movies. Apparently the latest film set in "Middle Earth" will be premiered on 13 December 2013 and has the unwieldy title "The Hobbit: The Desolation Of Smaug". New Zealand Post has released the designs of three of the stamps which will be part of the set and I suppose that the complete set will comprise a total of 6 stamps plus numerous other items (miniature sheets, booklets, strips of self-adhesive stamps etc. as have been issued in previous years).
The problem with these stamps is that there is very little to distinguish between 1 issue and another and after so many issues which have featured all the action on "Middle Earth" these latest stamps are really just quite boring. But no doubt they will sell well again to Tolkein enthusiasts.

New Zealand seems to have issued so many stamps on this theme by now that it almost seems that "Middle Earth" is taking over my stamp album. Perhaps Middle Earth could apply to join The Commonwealth to replace The Gambia. There are a number of characters in The Hobbit and Lord Of The Ring books who could substitute for The Gambia's very own "President Sheikh Professor Alhaji Dr. Yahya Abdul-Aziz Jammah", whom The Daily Telegraph has described as "deranged".
Meanwhile, the latest issues from The Turkish Republic Of Northern Cyprus have been released. Three stamps were issued on 8 July 2013 on the theme of "Fauna and flora" of Northern Cyprus. The 50 kurus value features a portrait of a hoopoe for bird enthusiasts:-

Three stamps were issued on 10 September 2013 on the subject of Islamic arts and culture:-

Australia Post issued yet more stamps on 8 October 2013 when a set of 4 gummed stamps, 4 self-adhesive coil stamps and 4 self-adhesive stamps from $6 booklets (10 x 60c) appeared on the subject of "Historic railway stations":- 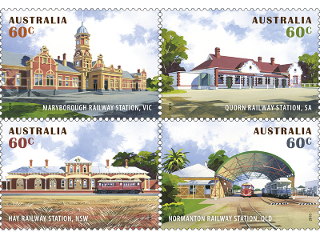 and there was a surprising issue from Malaysia on 23 August 2013 which coincided with the Thailand 2013 Philatelic Exhibition and which commemorated the birth of Prince George of Cambridge. The design was that of the previously issued miniature sheet which had commemorated the visit of The Duke and Duchess Of Cambridge to Malaysia in 2012 along with the Diamond Jubilee of Queen Elizabeth II but with the design of the central piece altered to commemorate the Royal birth and the philatelic exhibition:-

A set of 9 stamps was issued on 2 September 2013 which depicted museums and artefacts of Malaysia. The set was designed by World Communications Network and printed in lithography:-

One stamp was issued on 19 September 2013 to commemorate the 50th Malaysia Day. It was designed by Hazel Design and printed in lithography:- 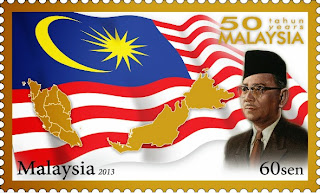