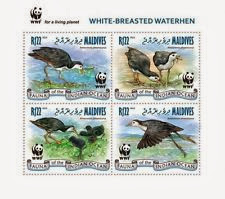 The list of new issues which I gave in Blog 308 which detailed the first Stamperija-produced stamps for Maldives was not complete and in all 9 sheetlets and 9 miniature sheets were released on 25 September 2013 on the subject of "Fauna of The Indian Ocean". In  addition to the 6 sub-sets already detailed there were issues which depicted dolphins, fish and dugongs (some designs depicted below). I have no idea if any or all of these species are found it the vicinity of Maldives  -  2 different articles in Wikipedia conflict with each other - one telling us that dugongs are found in Maldives and the other informs us that the dugongs which lived in Maldives waters are now extinct. Perhaps there is someone out there who knows the truth.
In addition to all the above items, a World Wide Fund For Nature issue was also released on 25 September 2013 which depicts the white-breasted waterhen which presumably is a Maldivian species although the scenery depicted on the single value miniature does not look like the sort of landscape that you find in Maldives (at least not on any of the islands that I've visited).
This WWF issue has furnished Stamperija the opportunity to produce the stamps in multiple versions (does anybody really buy imperforate versions at highly inflated prices?) and so, as can be seen, the collector may buy a 4 value sheetlet, an 8 stamp miniature sheet and the above mentioned 1 value miniature sheet as well as a sheetlet of 16 stamps which contains 4 horizontal se-tenant strips of 4 different designs; of course they all come in perforate and imperforate versions. 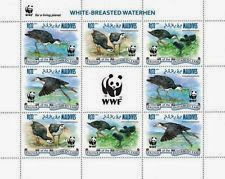 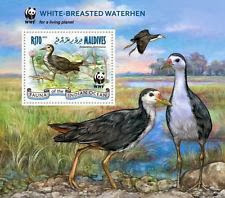 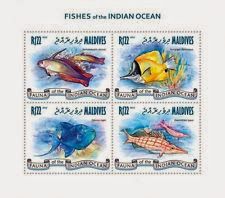 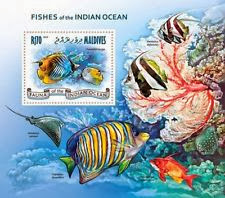 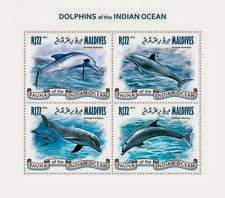 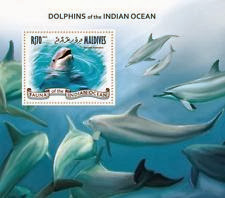 Continuing the theme of marine life, Bahamas will issue a set of 8 stamps on 29 October 2013 to commemorate the 20th anniversary of BREEF (Bahamas Reef Environment Education Foundation). The stamps are issued in sheetlets in which pairs of 2 different stamps of the same face value have been printed with a label between them. The stamps were designed by Bee Design and lithographed by Lowe Martin:- 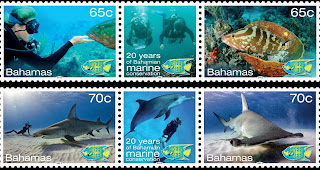 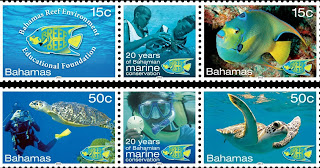 Finally, the latest issues of Singapore consist of a miniature sheet issued on 2 August 2013 to commemorate the "Thailand 2013" World Stamp Exhibition:- 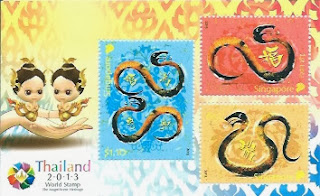 and the previously mentioned "Our City In A Garden" stamps were also issued in a self-adhesive sheetlet of the 4 stamps where 2 of the designs,for reasons best known to Singapore Post, included a tiny packet of seeds (appears as a tiny blur at the lower left of the bottom illustration below). The rear of the sheetlet has instructions printed on it on how to plant the seeds and gives a warning that the stamps must only be used for Singapore local mail (imagine the trouble if someone used these stamps on mail to countries such as Australia or New Zealand where the importation of items such as seeds is banned). I wonder if the New Zealand authorities are allowing stamp dealers to import these stamps. A rather ill thought-through issue I think.
Singapore has also recently issued 4 stamps on 10 September 2013 titled "Globalisation of Singapore" and 2 stamps and 1 miniature sheet on 12 September 2013 which depict fowl as a joint issue with Vietnam. 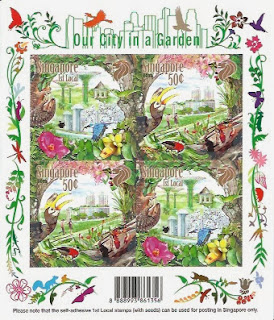