The British postal service, Royal Mail, has announced its programme of new issues for 2014. It is notable that a set will be issued on 14 October 2014 (the anniversary of the Battle of Hastings which is when Harold II, the last Englishman to rule England was killed - I wonder if the date of issue is intentional or coincidental) which commemorates British prime ministers and will inevitably include the late Baroness Thatcher who died during 2013 and who has been commemorated philatelically by a number of Commonwealth and non-Commonwealth countries. So far Royal Mail has not had the courage to issue stamps to commemorate the first and only female British prime minister and this set is obviously a way to commemorate this important historical figure without upsetting her detractors too much by diluting the impact of a Thatcher commemorative by the commemoration of other previous prime ministers, especially socialists, such as Clement Attlee.
The planning of a new issue programme is fraught with dangers especially when considering the commemoration of political subjects and Royal Mail has shown itself to be particularly timid in recent years when it comes to avoiding any particular form of controversy (an example being the way it caved in to demands that Paralympic Games medal winners stamps be issued after it had decided that stamps would only be issued to commemorate winners of the Olympic Games).
It is particularly ironic that Royal Mail will commemorate Baroness Thatcher given that it is finally about to be privatised since Lady Thatcher's government during the 1980's initiated the privatisation of many nationalised industries in Britain although she, herself, was always resistant to the privatisation of Royal Mail.
Vanuatu issued a set of 4 stamps on 18 September 2013 to commemorate the birth of Prince George of Cambridge. The stamps were designed by Denise Durkin and lithographed by Southern Colour Print:- 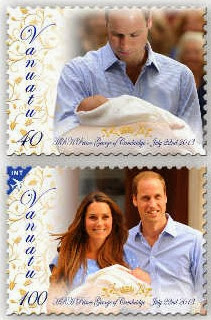 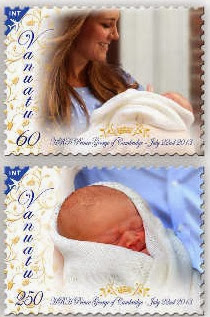 Vanuatu also issued a set of 4 stamps on 26 June 2013 which depicts local waterfalls. This set was also designed by Denise Durkin and lithographed by Southern Colour Print:- 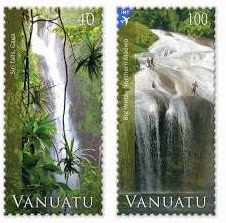 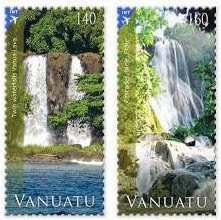 I have recently obtained from Nigel Haworth a number of issues from Nigeria of which I was not previously aware.

From 2009 there is a single stamp which commemorates a centenary related to the northern city of Enugu. I think that the stamp actually commemorates the centenary of the discovery of coal at Enugu which initiated a number of industrial developments in the area. The stamp was designed by John Makop and lithographed by Nigerian Stamp Printing and Minting Company:- 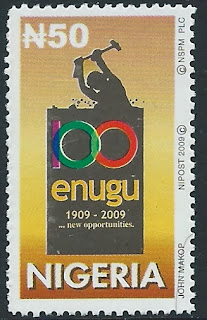 Meanwhile, the "50 Years of Management Excellence" single stamp issued in 2011 was apparently accompanied by a miniature sheet:- 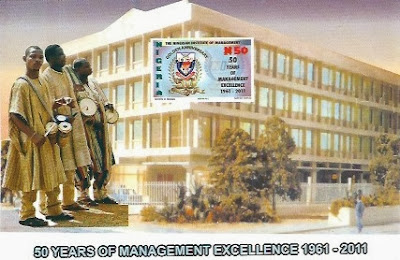 and a set of 4 stamps, a miniature sheet (both printed by NSPM) and a booklet (lithographed by Enschede) which contained 3 panes of the stamps (smaller in size than the stamps from ordinary sheets) were issued during 2012 to commemorate the Golden Jubilee of Ahmadu Bello University. Importantly, the basic set was printed with square holograms incorporated in the designs but the booklet stamps do not contain any holograms:-

Below I illustrate 2 Guyana stamps I have recently obtained from Steven Zirinsky which were previously unissued but have now been released with $20 surcharges applied by hand. The stamps are vertically se-tenant and appear to be coil stamps. I have written about these Guyana 2010 - 2013 $20 surcharges in recent blogs.

Finally, from Papua New Guinea, a set of 4 stamps from ordinary sheets, a miniature sheet which contains another 4 stamps and a single value miniature sheet were issued on 21 August 2013 and depicted local handicrafts in the form of woven baskets :- 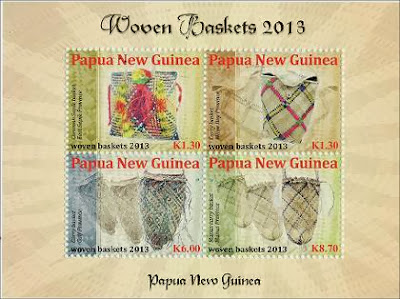 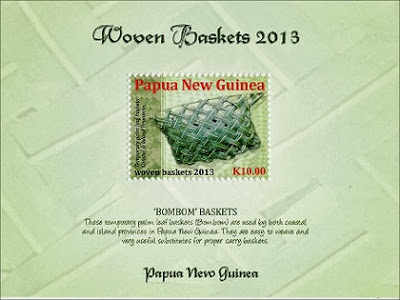