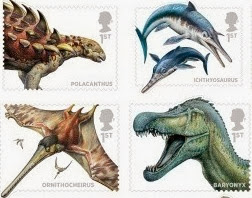 Suddenly, collectors of Commonwealth stamps find themselves under attack from greedy monsters although on this occasion I refer to the subjects depicted on the stamps - dinosaurs - rather than the postal administrations which are issuing them. On 10 October 2013, the British mail service, Royal Mail, will release 10 stamps on the subject of dinosaurs. Again, we note that although Royal Mail promised to issue more second class domestic rate stamps in 2013, the promise has again been broken  by these new stamps all being in the first class domestic rate - thus collectors must pay £6 for a simple basic set of these stamps. The stamps were designed by John Sibbick and printed in lithography by Walsall Security Printers. For once there does not appear to be any accompanying miniature sheet, booklets or "Smilers" sheets so collectors can consider themselves to have got off lightly.

Royal Mail also issued the third part of its Freshwater life "Post And Go"stamps on 20 September 2013 - this final part being dedicated to "River life". Needless to say that there are multiple forms of the stamps for collectors to buy - digitally printed from Hytech machines situated at the Autumn Stampex 2013 Philatelic Exhibition as well as by Winocour Nixdorf machines situated in various post offices across Britain and also lithographically printed and sold in packs from the Philatelic Bureau. Not satisfied with all that, new varieties of the Machin Head Post And Go stamps were also put on sale at Stampex with the security code MA13 incorporated in the background as also were the 6 values of the Union Jack stamps with added inscription "The Coronation 60th Anniversary".

Meanwhile, another greedy monster, Australia Post, has also issued a multitude of dinosaur-related items on 24 September 2013. The basic set consists of 6 x 60c gummed stamps from ordinary sheets, a miniature sheet which unites all 6 values and self-adhesive versions of 4 of the values from booklets of 10 x 60c and 20 x 60c, 2 of the stamps being found in the $6 booklet while the more expensive booklet must be bought to obtain the 2 other designs. 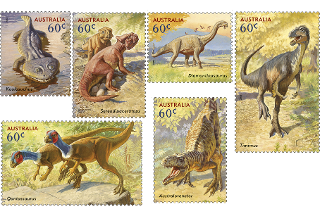 Gibraltar issued 6 stamps and a miniature sheet which combined all 6 designs on 14 September 2013 on the theme of endangered wildlife although since none of the featured wildlife is to be found in Gibraltar one must ask the question as to why such an issue is necessary. The stamps feature attractive animal portraits by the artist Jonathan Pointer and was lithographed by Lowe Martin:- 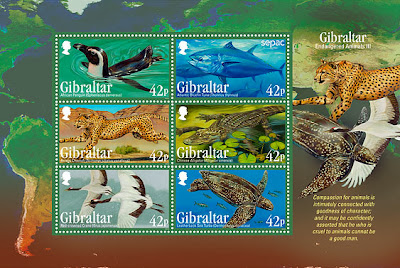 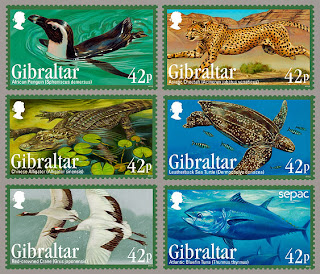 The latest issues from Malta comprise a miniature sheet produced as a joint issue with the Caribbean island of Curacao which was released on 20 August 2013. The subject of the issue is "Harbours" and the issue was designed by Cedric Galea Pirotta and lithographed by Printex:- 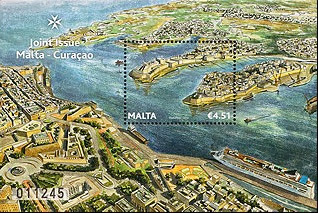 A stamp with an attached label to coincide with the Essen Philatelic Exhibition was issued on 2 May 2013:-

On 27 August 2013, six stamps were issued which depicted local buses. Again, the stamps were designed by Cedric Galea Pirotta and lithogrphed by Printex:-

Another philatelic exhibition-related item was issued on 26 September 2013 to coincide with the "China International Collection Expo" - the same stamp with an attached label as before:-