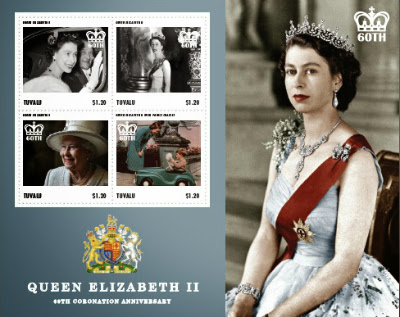 Tuvalu has announced that 2 new issues are due for release on 7 October 2013 which commemorate its Royal Family. The first is a sheetlet of 4 stamps and an accompanying miniature sheet which celebrate the 60th anniversary of the Coronation of its reigning monarch, Queen Elizabeth II (see above and below):- 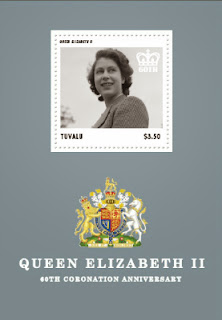 The second issue commemorates the birth of Prince George of Cambridge who is third in line to the throne of Tuvalu. Again the event is commemorated by a sheetlet of 4 stamps and a single stamp miniature sheet. Two of the designs depict the baby with his parents, The Duke and Duchess Of Cambridge, and the other two depict the baby's father with his parents, The Prince And Princess Of Wales, soon after he had been born. Currently, the Tuvalu Philatelic Bureau website says that there have been delays in the stamps arriving in the islands so the actual date of issue may be later than that stated above:- 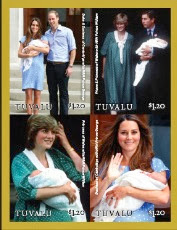 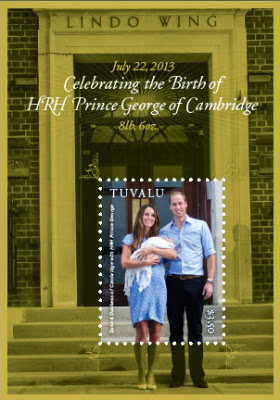 Also, now on sale are the 4 value sheetlet and miniature sheet released by Ghana to commemorate the birth of Prince George. As a republic, Ghana seems to have little justifiable reason to commemorate the event although Prince George"s great grandmother, Queen Elizabeth II, was the Queen of Gold Coast and Ghana from February 1952 until 1 July 1960:- 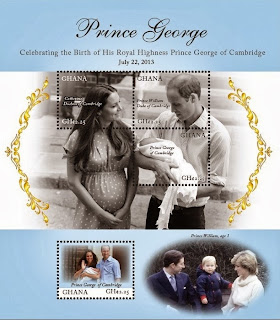 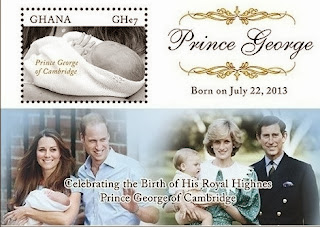 The 6 Christmas stamps which will be released by The Isle Of Man on 17 October 2013 show designs which have previously featured on Christmas stamps from the island. This is said to commemorate the 40th anniversary of the establishment of The Isle Of Man of Office by showing issues which have appeared over that period although the actual stamps depicted on the set actually date from 1988, 1990, 1991, 1995, 2005 and 2006. Presumably using old designs means the Isle Of Man Post Office can skimp on the fees they would have to pay to an artist for new designs - there's always money in it somewhere. As well as the 6 gummed stamps issued in ordinary sheet format, the 40p and 42p values are also issued in self-adhesive format from booklets:- 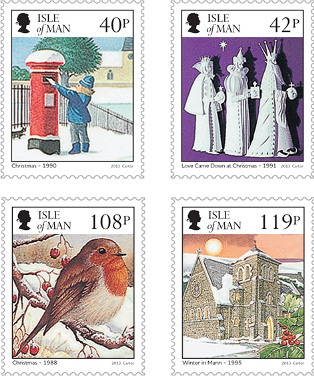