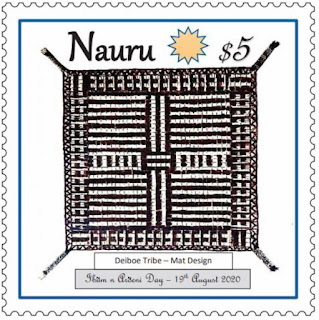 🇳🇷 Nauru Post issued a single stamp on 19 August 2020 to commemorate the first anniversary of The Day of The Tribes being made a national holiday. Nauru has what it describes as 12 tribes each represented by a point on the 12 pointed star featured on the national flag. The illustration on the stamp shows a mat design of the Deiboe tribe. Rating:- ****.

I believe that this is the only stamp to have been issued by Nauru Post during 2020. The Christmas 2019 stamp mentioned in Blog 1642 but with no stated date of issue was released on 23 December 2019. 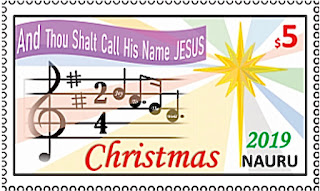 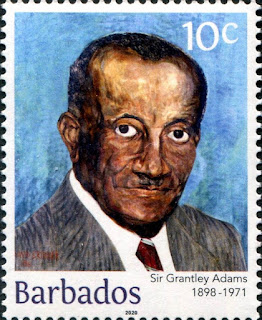 🇧🇧 The 10c definitive stamp reissued by the postal service of Barbados with a 2020 imprint in the lower border which was reported originally in Blog 1791 and said to have been issued on 1 March 2020 is now illustrated above. The subject of the issue is Builders of Barbados and the stamp depicts Sir Grantley Adams who was the first Prime minister of The West Indies Federation from 1958 to 1962 having been the first Premier of Barbados from 1953 to 1958. Rating:- ***.
One may assume that there will be a commemorative issue from the Barbados postal service in 2021 to commemorate the 50th anniversary of Adam’s death. We may also look out for a set commemorating Barbados becoming a Republic though the country’s various governments have more than once announced that Barbados’s status would change without anything actually happening.
There are now very few Commonwealth postal services (or their philatelic agents) which have not issued stamps during 2020 despite the barriers to doing so raised by the COVID-19 pandemic. Those that are not known to have yet released new stamps are Anguilla, Belize, Cameroon, eSwatini, Lesotho, Montserrat, Rwanda, St Kitts, Saint Lucia, Samoa, Turks And Caicos Islands and Zambia - just 12.
🇮🇳 India Post issued one My Stamp on 22 December 2020 which commemorated the Centenary of Aligarh Muslim University. As usual the stamp was sold in sheetlets of 12 with attached labels and at a premium. 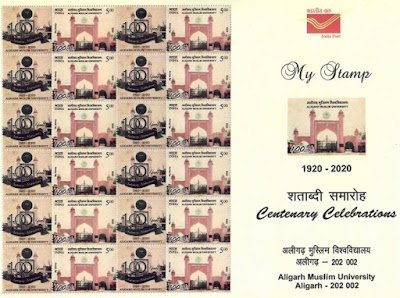 🇬🇧 It would seem that Royal Mail’s first stamp issue of 2021 will be made up of 10 1st Class domestic rate stamps which depict British national parks of which there are 10 in England, 3 in Wales, 2 in Scotland and none in Northern Ireland. The issue coincides with the 70th anniversary of the establishment of the first English national park in the Peak District in Derbyshire as well the 90th anniversary of a governmental enquiry which recommended that a National Park Authority be established to select areas around the country to be designated as national parks. Thus it was that peaceful areas of beautiful British countryside became overwhelmed by thousands of people trudging over them with the crowds pouring over the hills of the Peak District on a Bank Holiday Monday dwarfing in size the masses one might see doing last minute Christmas shopping in Oxford Street on Christmas Eve (well, not this year I suppose). Of course this was not totally disadvantageous for the people living there as the value of their houses shot through the roof because their location in a national park made them highly desirable properties.
Posted by White Knight at 20:07