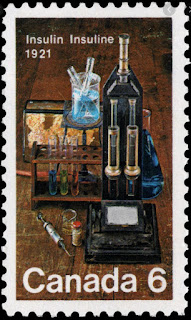 🇨🇦 Canada Post has revealed some details about its 2021 new issue programme. Top of the list is an issue to commemorate the Centenary of the discovery of the hormone, insulin, by Canadians Frederick Banting and Charles Best and Briton James Macleod at the University of Toronto (see below). This discovery of insulin and a way to render it usable for administration to people with diabetes may well be Canada’s greatest gift to mankind saving, as it has, the lives of millions of people.

Other subjects to be featured will include:-

The issue commemorating the Centenary of the discovery of insulin will be Canada’s fourth philatelic commemoration of the landmark event in medical history. A single stamp was issued on 3 March 1970 depicting laboratory equipment of Frederick Banting, the young Canadian physician who began work on isolating a secretion from the pancreas gland and showing that it would reduce blood sugar. People with with what is now called Type 1 Diabetes Mellitus produce no insulin and as a result eventually experience a fatal metabolic catastrophe. Banting, aided by the medical student Best and experimenting on dogs, worked on identifying and isolating a product of the pancreas which they eventually did indeed show to reduce blood sugar. The work was carried out in laboratories at the University of Toronto under the supervision of Professor John Macleod  who played a vital role in enabling Banting to achieve his goal.

A blood sugar-reducing pancreatic extract was identified in the summer of 1921 and after further trials and work by the biochemist James Collip in purifying the extract the product, insulin, was first produced on a large scale by the United States pharmaceutical company, Eli Lilley. Millions of lives would be saved as a result including that of HG Wells, the English writer who had developed diabetes, who was a joint founder of the British Diabetic Association. How very much this story reminds us of the events of 100 years later where people were waiting for a medical advance - this time a COVID-19 vaccine - which will save millions of lives after a short period of devoted and rapid medical investigation and pharmaceutical up scaling and production and scientists and manufacturers from several countries all involved in bringing the treatment to those who needed it.

Banting was celebrated on a Canadian stamp issued in 1991 as part of a set of 4 commemorating Canadian doctors. Banting and Macleod were awarded the Nobel Prize for Medicine in 1923 but Banting was furious that the Nobel Committee had not included Best among the named winners of the award and therefore shared his part of it with Best while Macleod responded by sharing his part of the award with Collip. It was fair enough - all had played a vital role in making insulin a life-saving reality for people with diabetes. 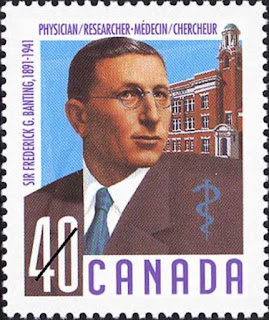 Canada Post gave further philatelic recognition to Banting on one of its Millenium stamps issued on 17 January 2000 but also this time depicted Charles Best and one of the dogs used to study the effects of insulin. 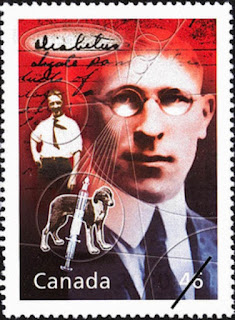 John Macleod has so far not been commemorated on a Royal Mail stamp and it would be pleasing if this omission is corrected in the stamp programme of 2021 though I don’t hold out much hope of this happening as, despite his role in saving millions of lives, he was not an aged modern musical performer nor did he ever appear in Star Trek or Star Wars. Perhaps the Centenary of the discovery of insulin will be commemorated by a postmark or even a specially painted postbox in Aberdeen where Macleod worked after his return from Toronto. 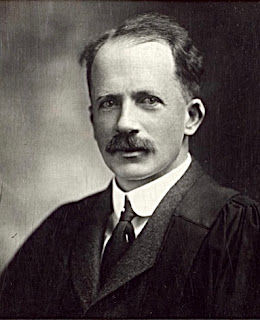 🇫🇯 There appears to be a new surcharged definitive stamp from the postal service of Fiji which is being offered for sale on an internet auction site. This is assumed to have been released during 2020. It is the previous 44c Purple Swamphen value with a 6c surcharge applied. Rating:- ****. 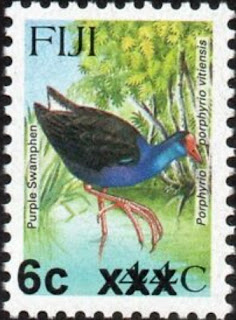