🇲🇼 In Blog 1242 I mentioned the 5 new provisional surcharges from Malawi Post whereby RED surcharges had been applied to old bird and butterfly definitives. The dealer, Nigel Haworth, is offering these stamps in his latest price list along with some surcharge errors but he also points out, and is selling, that 4 of the 5 stamps were printed with surcharges in alternative positions on the stamps. Nigel Haworth states that the alternative set of 4 was not acceptable to the Malawi postal authorities and that 2000 of each value was produced. However I'm not sure whether these stamps were actually released or simply prepared but not released because of their unacceptability. Either way they are quite interesting and worth considering as additions to a Malawi collection.
Nigel Haworth also states that he believes that these surcharges are to be the last as there is to be a new issue 'covering local use'. Rating:- *****. 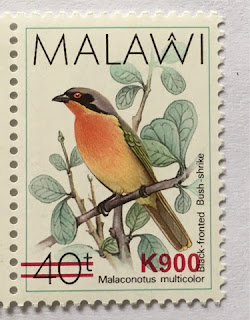 🇱🇨 I recently purchased from Steven Zirinsky a cover from Saint Lucia, of which he has still has several on his website, which suggests that at some times at least the postal service of that country is not supplying postage stamps for ordinary members of the public to use on their mail. The cover is cancelled by a rectactangular mark as illustrated below and the cancellation serves to indicate postage paid in the place of a postage stamp. The Saint Lucian postal service has issued very few new stamps in recent years - none in 2017, 5 in 2016 and just one in 2015. I do not think that most, if any, stamp dealers have been supplied with any of these stamps so they are currently not likely to be found in most people's collections though, no doubt, they will appear eventually. In the meantime the inclusion of covers cancelled without stamps in any collection serves to illustrate what has been used for the ordinary postal service in Saint Lucia during this period. 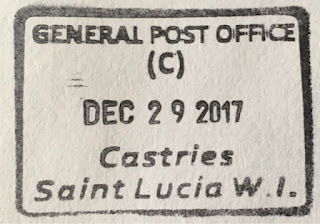 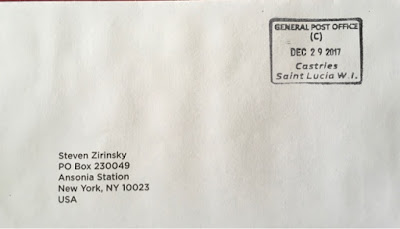 🏴 Currently on sale on an internet auction site are the items depicted below which purport to originate from Sierra Leone. The items are being offered for sale by dealers who frequently advertise the philatelic products originating from the notorious Lithuania-based agency, Stamperija, and the items do indeed resemble the products which that agency continues to unload on the new issues market.
The first of these products are a scurrilous and offensive miniature sheet and sheetlet of 4 identical 'stamps' which commemorate '20 Years since Monicagate' in which the then President of The United States, William Clinton, is alleged to have indulged in sexual activity with a young woman serving as an 'intern' on his political staff, Monica Lewinsky. It was a low point in modern American political history. The two protagonists are depicted in comic form with the US President stripped down to his boxer shorts and with his arm around the cartoon Miss Lewinsky. Clinton is also depicted with his hand raised holding a glass of champagne. These items look very much like the frequently tasteless items which are released by Stamperija but I am I find it hard to believe that even that purveyor of paraphilatelic tat would dare step quite so far out of line. If Stamperija-produced products are a parody of modern stamp issues then this appalling rubbish is a parody of Stamperija-produced paraphilatelia. Caveat emptor. 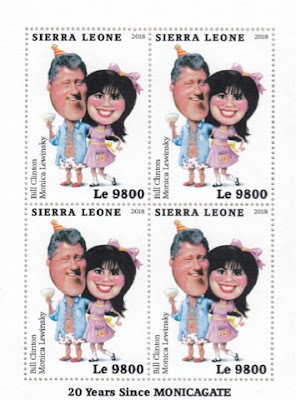 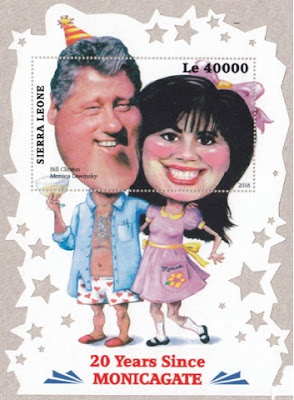 Since the days of the appalling Clinton and his alleged activities, American modern political history has witnessed very many more low points and they occur now on an almost daily basis with the rise to power of the present elected President, Donald Trump. It therefore came as a surprise to the world when the grubby little man appeared to achieve something of great importance - a meeting with the equally unpleasant ruler of North Korea and an agreement which is aimed at bringing long-term peace to the Korean Peninsula and the abandonment by North Korea of its nuclear weapons. It also comes as a surprise that a sheetlet of 4 different 'stamps' and 1 accompanying miniature sheet is being offered by the same dealers alongside the Clinton confections to commemorate the 'Historical meeting of Donald Trump and Kin Jong-un'. These items look so very much like Stamperija-manufactured products that one can hardly believe that they are bogus and perhaps they will indeed appear on the Stamperija website tomorrow. The 'issue' seems to be an attempt to highlight President Trump's apparent success in bringing Kim to the conference table and in this time of 'fake news' and interference in other countries' internal political affairs one must wonder where these items have originated. Again, caveat emptor. 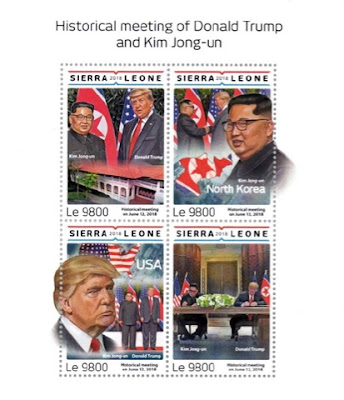 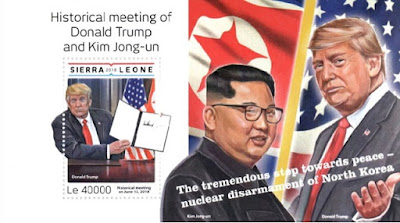 The above two 'issues' are accompanied by a third - a sheetlet of 4 different 'stamps' and 1 miniature sheet which look for all the all the world like Stamperija creations and which commemorate the very recent Royal Wedding of The Duke and Duchess of Sussex. It is worth noting however that Stamperija issued a Royal Wedding sheetlet and miniature sheet in the name of Sierra Leone only shortly before and Stamperija does not usually issue 2 items on the same subject so close together so these appear to be possibly bogus as well. The first 2 illustrations below are the possible bogus items and the lower pair are those previously put out by Stamperija:- 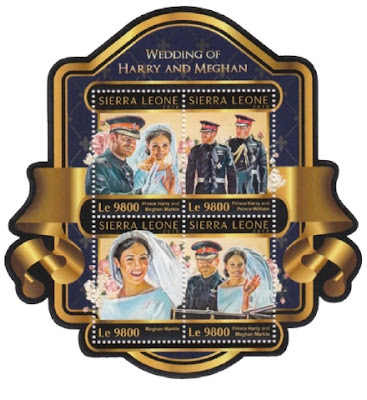 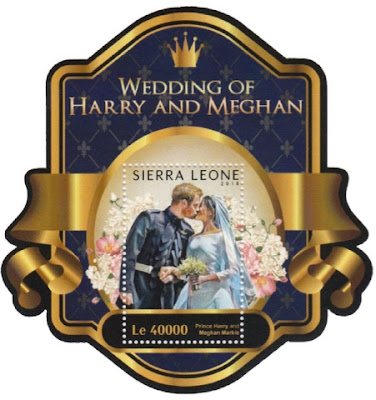 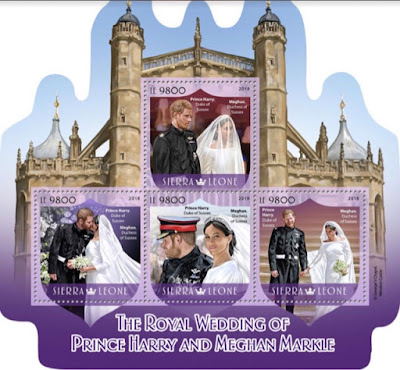 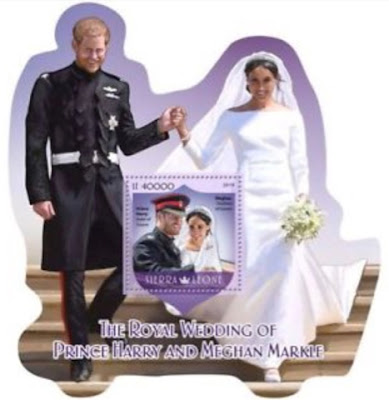 Of course, few people will have any sympathy for Stamperija if its contractual right to produce items on behalf of Sierra Leone is being abused by another source of such products but the manufacture and release of such products together with the unassuaged flood of products from Stamperija itself pose a great threat to the continuing collection of new stamp issues since people may be spending a lot of money on illegal and valueless pieces of paper which can never serve as stamps for use on mail.
If these are genuine 'issues' from Stamperija, working on behalf of its client postal administration Sierra Leone, then the outrageous Clinton items in particular are very dangerous indeed for the reputation of that small and poor country and must be a source of international embarrassment for its government.  'Genuine' Stamperija issue or bogus issue - either way these items are highly undesirable.
One final point, the date of the 'issue' of these items is claimed to have been 4 July 2018 and no doubt that date has been picked as either being ironic or just mischievous.
Addendum - These items, including the atrocious Clinton-Lewinsky products, have now appeared on the Stamperija website and so are not bogus issues but are 'official' issues. The 'date of issue is indeed given as 4 July 2018 and it must be that these items are intended to be at the very least mischievous and possibly downright insulting to The United States which is an undesirable situation in which a national post office to find itself.