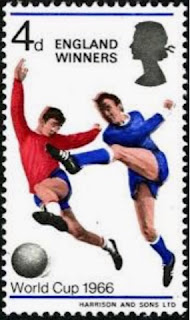 🇬🇧 In Blog 420 I wrote at considerable length about the stamps issued by the British postal service and other Commonwealth countries, particularly those which had hosted or participated in the Finals, to commemorate the football World Cup which takes up a month of a good number of peoples' lives every four years. Now we are approaching the final stages of another one of these Championships and the team representing England has reached the semi-finals which is an achievement longed hope for by a sizeable percentage of that Commonwealth nation. The English usually have a quite unjustified belief in their team's ability to win the World Cup but on this occasion the team has done so particularly well as to put Royal Mail in a position where it must surely be preparing a set of stamps, probably in miniature sheet format, to release as soon as possible after any English victory in the Final of the Championship as to catch the maximum number of purchasers of such a set while they are still in the throws of their victorious patriotic fervour.

Blog 420 points out that the British Post Office issued a single stamp in 1966 to commemorate the previous and only time when the English football team won the World Cup in the year that England was the host country. The Post Office had issued 3 stamps to commemorate the hosting of the Championships and the lowest value was overprinted 'ENGLAND WINNERS' to commemorate the victory. Rarely has there been such a rush by the English general public to buy a stamp as occurred then and the stamp was soon selling, I recall, for 10/- (50p) compared with a face value of 4d (less than 2p). Of course anyone who bought this very common stamp for 10/- was soon to find that they had seriously overpaid to obtain their Victory souvenir.
Since 1966, The Post Office/Royal Mail has never had another chance to commemorate a second World Cup victory. Nevertheless several opportunities have been seized to issue stamps which recall the famous victory of 1966.
1999 - Millenium series, The Entertainer's Tale - 1 stamp depicting the 1966 England team captain holding the Jules Rimet Cup. 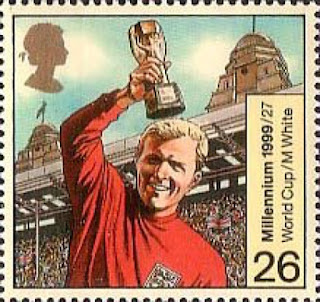 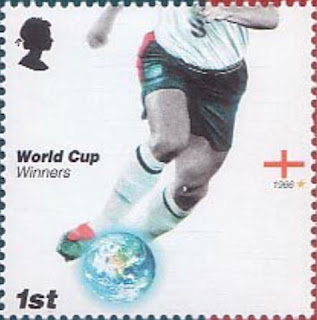 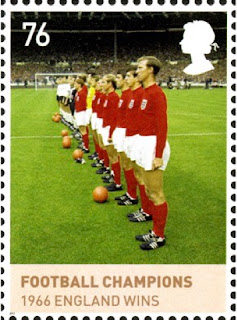 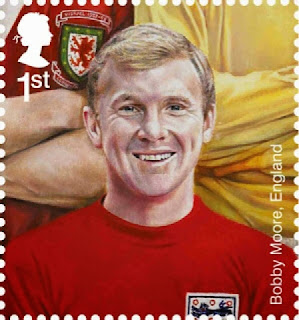 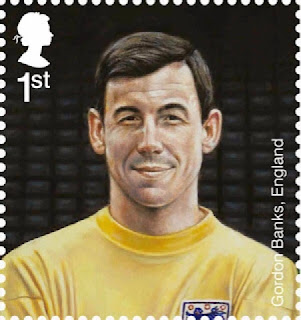 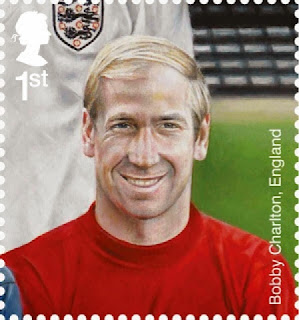 We must of course wait for the outcome of the upcoming semi-final in which the English team will play against that of Croatia and the final which will be against either Belgium or France but it will be interesting to see what Royal Mail comes up with if the English team captain Harry Kane finds himself holding the World Cup aloft next weekend.