🇿🇦 In a comment in the previous blog Chris De Haer kindly pointed out that it appeared that the South African Post Office had issued a sheetlet of stamps in April 2021 to commemorate the Centenary of the South African Air Force which was considerably delayed in its release which should have been in the latter part of 2020.

An item on an internet site (defenceweb.co.za) dated 28 April showed a photograph of the previous commander of the South African Air Force holding up ‘an album’ containing a sheet of 10 different stamps (self-adhesive I assume) depicting aircraft. The accompanying text points out that the actual Centenary occurred in September 2020 and says that “the centenary album came ahead of the stamps being printed and going into circulation with the ‘SAAF Embracing Our Collective Heritage Commemorative Stamp Issue’ being the only memento of the event. It was originally planned for the stamps to be available at last year’s SAAF Museum air show in May, cancelled due to COVID-19, and later in the year at the Africa Aerospace and Defence (AAD) Exhibition - also a pandemic casualty. According to the SAAF the commemorative stamps are available at Post Office philatelic counters and the organisation will advise when the stamps are available in post offices”. From which I assume that this sheet is the first issue of 2021 from the South African Post Office.  The probable date of issue is 28 April. 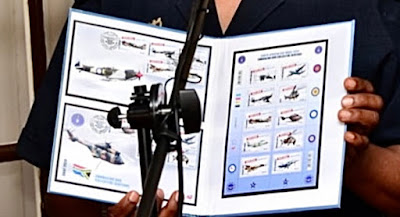 A report on another Internet site illustrates the sheetlet and has the date 2020.09.10 printed in the upper left-hand margin which we might expect was the original planned date of issue. 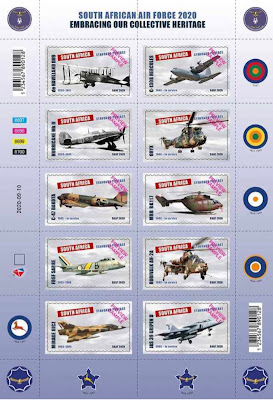 🇵🇬 Post PNG, the postal service of Papua New Guinea, has outlined a list of upcoming dates of issue for several sets of stamps due to appear in the upcoming weeks. These dates may be somewhat optimistic as the PNG postal service tends to announce the date of issue of stamps and then the philatelic items fail to appear on the new issue market. The Post PNG internet site is till showing two issues which are accompanied by a date of issue some time in 2020 but there are no accompanying details about the issues and no specific date of issue.

For what it’s worth then -

🇸🇬 Some new issue dealers are offering a miniature sheet containing two each of Singapore Post’s 2020 Year of The Rat stamps in a tête-beche arrangement. I have not seen this item until recently to the best of my recall and I am not clear why it has appeared on the market now. 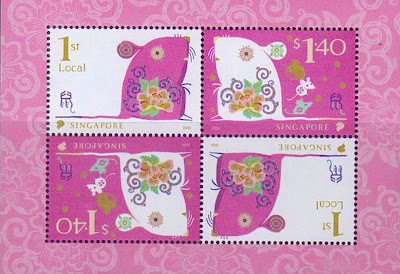