Iceland was a Sovereign Kingdom of King Christian X in personal union with Denmark. After the German invasion of Denmark in 1940, Iceland remained neutral but the British were alarmed by the German diplomatic presence in Iceland and worried that the Germans might take advantage of Iceland's strategic position.
In consequence the British decided to occupy Iceland to prevent the Germans from seizing the island and on 8 May 1940 HMS Berwick and HMS Glasgow sailed from Greenock with HMS Fearless and HMS Fortune as escorts, carrying an invasion force of about 400 Royal Marines of the 2nd Royal Marine Battalion under the command of Colonel Robert Sturges. On arrival at Reykjavik early on 10 May, a British reconnaissance plane flew over the town waking a number of the local citizens. A local policeman raised the alarm of the imminent invasion when he saw the British ships arriving but the landing of the Marines was unopposed and they were met at the harbour by the British consul and some angry protesting locals.
The British set about securing the radio station and post office but while the Icelandic government issued a protest at the violation of Iceland's neutrality the British sought to appease the Icelanders by promising non-interference in domestic Icelandic affairs as well as compensation and a trade agreement. Subsequently the Icelanders tended to co-operate with their British occupiers. Germans living in Iceland were rounded up and placed under arrest.
One week later the Marines were replaced by 2 regular army brigades. The following month, Canadian army brigades arrived to replace the British soldiers.
On 7 July 1941, the defence of Iceland was transferred from the responsibility of Great Britain to that of The United States and the British occupation ended. Although Iceland co-operated with the British and the Americans in turn, the country remained neutral throughout the Second World War.
The Icelandic post office continued to operate after the British occupation and the occupation had no significant philatelic consequences such as the production of special stamps related to the occupation.
As an illustration of the period of British occupation for my Commonwealth collection I recently obtained a cover of Iceland sent to London with a Reykjavik postmark and registration label which is dated 15 May 1940 and backstamped with a Liverpool registration postmark dated 23 May 1940. The cover is interesting as it is dated just 5 days after the landing of the British occupying forces and this implies that there was no real disturbance to postal services in the immediate period after the invasion:- 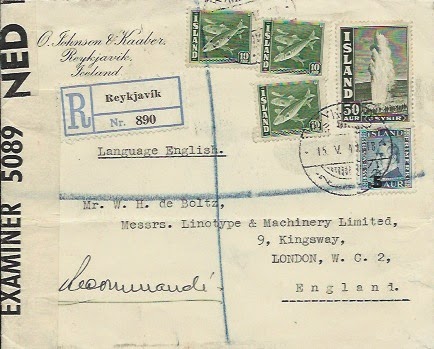 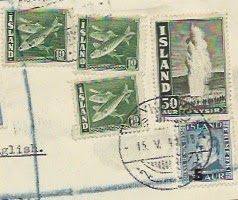 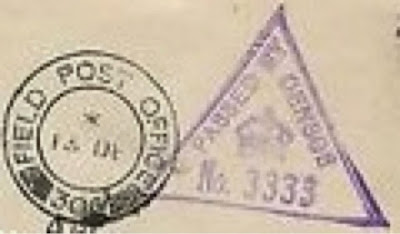