I include here more Mozambique stamps issued between 1998 and 2005 which I have acquired over recent years and which, I suspect, are generally rather difficult to locate. 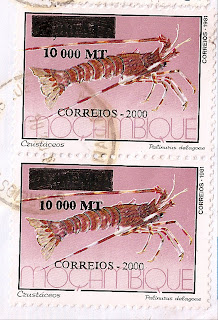 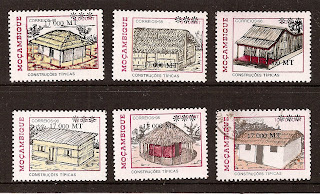 6 values of the set of 10 originally issued in 1998 which depict "typical buildings", all surcharged 17,000 MT with the former value obliterated by 3 small stars and issued in 2002. Other values of the same set may exist with this surcharge or surcharged with a different value, as demonstrated by the 3,000 MT on 6,000 MT depicted in the previous blog. 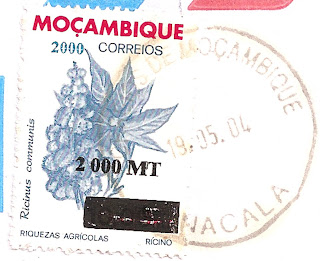 Flower stamp surcharge of 2,000 MT originally released in 1998, additionally overprinted "2000" in blue, presumably re-released in 2000. This stamp is fixed to the cover of 2004 on which the above "crustacean" stamp was applied.

Various "flower" stamps with different surcharges applied. The first is the 2,000MT surcharge without the additional "2000" overprint. 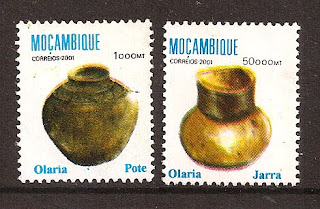 2 values of the set of 8 pottery stamps which although inscribed "CORREIOS 2001" were apparently issued on 2 December 2002. I have never yet seen the complete set being offered for sale. 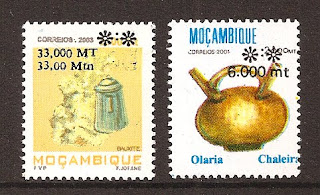 I have my suspicions that discovering how many different stamps were issued during this period will prove to be a life-long quest and that obtaining an example of each one would be an even greater task. Still, all very interesting is it not?
Posted by White Knight at 04:32