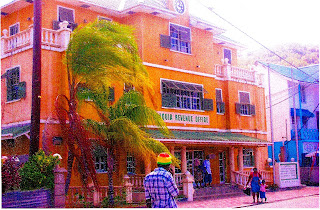 The December "Dealer Interactive" section of a New York-based stamp agency features 119 items and of these, 41 are items which are said to have been issued by the individual islands of the small Commonwealth territory of St. Vincent & The Grenadines. In this particular month's listing, only two of the items are said to have been issued for Bequia (pronounced Bek-way) which is the largest island of the Grenadine group which is possessed by St. Vincent although it is still very small with a total population of about 4,300, said to be of African, Scottish and Carib Indian origin. The island capital is Port Elizabeth where the main post office is situated (pictured above). The Post Office of St. Vincent first issued stamps inscribed "St. Vincent Grenadines" on 14 November 1973, ostensibly for use in the small islands which belonged to it, and they commemorated the royal wedding of Princess Anne to Mark Phillips in the standard design used by the Crown Agents for its client territories. 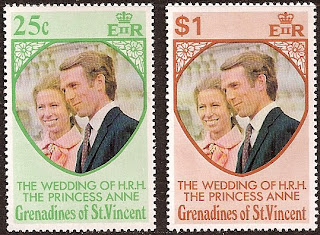 Stamps were then issued for The Grenadines of St. Vincent until 1994 when the last issue appeared which consisted of 12 stamps (SG 1010 - 1021) which featured medicinal plants. One interesting issue had been released on 26 September 1976 which had consisted of 7 booklets priced at $2.50 each and each containing 4 different se-tenant panes of 3 stamps and one label and each booklet produced for a different island in the group. The cover of that produced for Bequia is illustrated below. 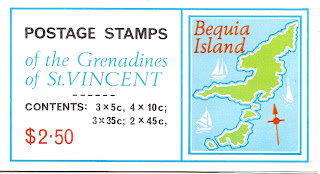 During the 21 years of being a philatelic entity "The Grenadines Of St. Vincent" had had a chequered career as regards the issuing of new issues including the participation in the notorious "leaders of the world" series of stamps produced by the equally notorious Philatelists Limited and, as if that was not bad enough, then allowing the New York agency to take over control of its new stamp issues so that there was an even greater flood of new issues, celebrating themes of such great relevance to these tiny islands as the death centenary of Vincent Van Gogh (16 stamps and 4 miniature sheets), Japanese railway locomotives, several sets depicting Walt Disney characters, the 15th death anniversary of Elvis Presley and so on, ad nauseum.
But although general issues for The Grenadines ceased in 1993, some one thought it was a good idea to produce stamps for each tiny island and these were produced from 1994. Mercifully, Stanley Gibbons Commonwealth Catalogue recognised these for what they are from the word go and columns of print have been added to their catalogue appendix listing these labels - islands with their names printed on these items are Bequia, Canouan, Mustique, Myreau, Palm Island, Tobago Cays, Union Island and Young Island; thus none of these "issues" has received a Gibbons catalogue number and none appear in the main list of stamps issues. And yet they continue to be produced and somebody, presumably, buys them. I visited Bequia in March 2008 and visited the post office in Port Elizabeth and saw with my own eyes that not a single example of these individual island stamps was on sale at the post office - certainly not for use on mail and not even as a philatelic souvenir for tourists to buy. The items on sale then were all the values of the 1996 Crotons definitive set for St. Vincent itself (apart from the ultra-scarce 20c value which I have never seen offered for sale), the 80c value of the St Vincent Grenadines birds and eggs definitive set of 1978 i.e. it was being sold 28 years after it had first been issued, the 75c value of the St. Vincent 1984 flowering trees definitive series, 2 values of the 2007 local insects set of St Vincent, the 20c value of the 2006 set from St Vincent which commemorated the 25th anniversary of diplomatic relations with Taiwan, the 20c fish stamp (SG 5537) of 2006 and, bizarrely, the $1.40c value of the St. Vincent 1999 dinosaurs "Australia '99" set. I made three covers with all the available stamps (apart from the high values of the crotons definitives) and they arrived when I returned home, cancelled with a double ring "BEQUIA ST. VINCENT AND THE GRENADINES", dated "MR 4 08", each stamp being neatly and individually cancelled (Royal Mail please note - see previous blog). 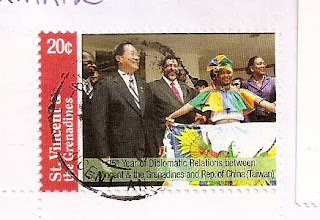 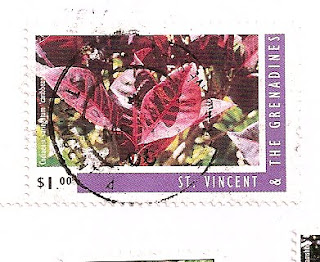 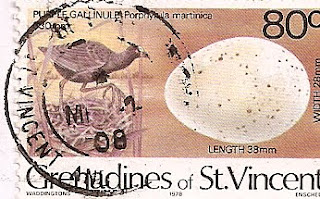 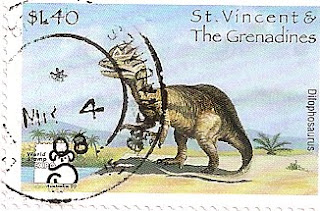 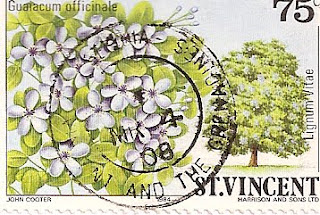 Unless things have changed at Bequia Post Office in the past three years, the numerous individual issues which have been produced seem to represent something of a fantasy and in the case of that particular island, certainly when I visited, they have not been obtainable at the post office (nor, for good measure, did any gift or souvenir shops seem to be selling them either). Under these circumstances they can not be described as postage stamps and Stanley Gibbons are more than justified in not giving them full catalogue status.
Posted by White Knight at 07:37