Following a war between China and Japan which lasted from 1894 to 1895, China was faced with paying large indemnities to the Japanese and to raise money to pay these the Chinese government leased the naval base at Port Arthur to Russia and to counter this, the British took out a lease on the walled city of Wei Hai Wei, south of Port Arthur and west of the Korean Peninsula. The town was leased from 24 May 1898 and it was originally intended that the lease should last as long as "Port Arthur remained in the occupation of Russia" although the territory remained British much longer than that since it was not returned to Chinese sovereignty until 30 September 1930, 25 years after the Russians gave up Port Arthur. In the absence of an organised mail service a private local post was established by a trader in Wei Hai Wei whereby mail was carried from the town to the Chinese port of Chefoo, 63 miles away. Mr. G. K. Ferguson, the manager of Cornabe & Co., and Captain Harrison established the courier service on 8 December 1898 and Mr. Ferguson became the postmaster. Provisional postage stamps were produced by stamping Cornabe's chop (trademark) on sheets of native red paper, applying the chop once for the 2c value and twice (one inverted) for the 5c. The value was written in the top corners with CP in the lower corners on the 2c. In all 784 of the 2c were produced and 392 of the 5c (both in sheets of 98). The cover depicted below bears one of the 2c stamps and is addressed to Chefoo and additionally has a 1c Chinese Imperial Post stamp applied which was cancelled at Chefoo (dated 7 January 1899). The service operated until 15 March 1899 when a Chinese Imperial post office opened in Wei Hai Wei. The first British post office opened on the island of Liu Kung Tau, where the British administration was first located, on 1 September 1899 and a second office opened on the mainland at Port Edward on 1 April 1904. 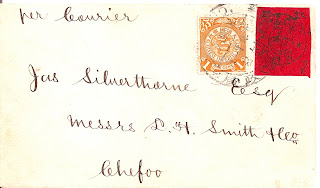 Wei Hai Wei is one of the very few British colonies never to have had postage stamps produced with its name on them and indeed it was not until 30 November 1922 that it had stamps produced uniquely for use in the colony. Until 1 January 1917 the stamps of Hong Kong were used on mail in Wei Hai Wei. A number of postmarks were brought into use. The illustration below shows a postcard sent to Devonport in England franked with a 4c Hong Kong stamp of 1903 and cancelled by a violet oblong postmark of Port Edward, dated 30 June 1905. 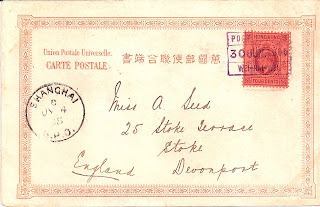 From 1 January 1917 Hong Kong stamps were sold at Wei Hai Wei with the overprint "CHINA" applied to them; thus George V, King and Emperor, was depicted on stamps bearing the inscription of China, itself an ancient empire - surely this must have been the very peak of imperial pretension as had ever been depicted on a postage stamp. The overprinted stamps were not only for use in Wei Hai Wei but also from existing agencies in the so-called Treaty Ports of Amoy, Chefoo, Canton, Foochow, Hankow, Hoi how, Ningpa, Shangai, Swatow and Tientsin. This latter usage ended on 22 September 1922 from which date until 1930 Wei Hai Wei finally had its own postage stamps of a sort. 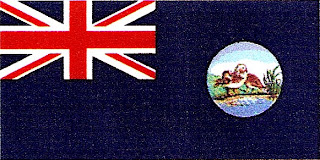 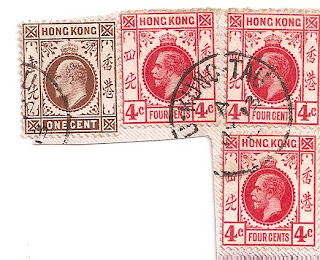