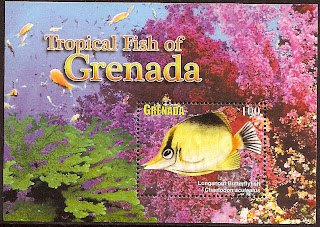 I am very much looking forward to the imminent publication of the Stanley Gibbons Central and Southern Africa Catalogue which the editor recently mentioned in an editorial in Gibbons Stamp Monthly and which will feature, for the first time, the stamps issued by Mozambique since it joined The Commonwealth (although issues up to 2004 have appeared in the catalogue supplement published in the monthly magazine). I am not keen to see the listing of the flood of agency-produced stamps which have been "issued" since 1999 but will be very interested to see what the catalogue makes of the numerous locally surcharged stamps which were produced between 1998 and, I think 2005, most of which are extremely hard to track down and some of which, I suspect, are not yet even known about.

I recently obtained several of these surcharged stamps in a pack of kiloware and that was the first time I had seen any of them being offered for sale. I had long been searching for the Mother Theresa stamp of 1998 surcharged 3,000 Mt and had never really expected to find it. This stamp is listed by the Michel Catalogue in Germany. The other stamps in the illustration were previously unknown to me and are a 1981 flower stamp overprinted "2000" and surcharged 6,000 Mt (I had previously acquired the same stamp similarly overprinted "2000" but surcharged 10,000 Mt. on a cover dated 12.09.2002 and on the cover was another value from the same set of flowers stamps featuring the flower "stapelia", also surcharged 10,000 Mt and overprinted "2000") and a 100 Mt stamp from the 1992 Olympic Games set surcharged 17,000 MT with the old value partially obliterated by 2 little stars.

Also in the kiloware that I bought, was the 6,000 MT of the 1998 housing set with the value obliterated by 3 small stars and surcharged 3,000 MT. I had previously obtained unused examples of 5 values from the original set of 10 similarly surcharged 17,000 MT with the 3 little stars obliterating the original value and later on obtained another value, the 100,000 MT, again surcharged 17,000 MT in the same way, in used state. How many versions of these stamps exist with surcharges applied is unknown to me and I am looking forward to seeing what the Gibbons Catalogue has to tell us about them.

From the sublime to the ridiculous. Hard on the tail of an issue of a $65 Brunei dollar (about £32) miniature sheet from Brunei and some horribly expensive definitive and official stamps from the agency which is producing stamps for the Cook Islands, I have obtained an excruciatingly expensive miniature sheet which was allegedly issued during 2011 by Grenada. It is part of an issue of 4 low value definitive stamps, the two highest values of which are no more than $1.50 and $2, but apparently has a face value itself of $100 (£23.63p). This is a far higher value than Grenada has ever issued before and given the rest of the values in the set, one can not help but think that the value must be an error and was originally intended to be $1.00 but having produced something priced a hundred times greater, somebody gave the go ahead for it to be released any way - you don't have to sell many of these to recoup the cost of production of these stamps. That's my theory anyway. I hope the New York agency responsible for Grenada's stamps issues does not feel that it is a good idea to extend this precedent to other Commonwealth territories for which it is responsible so that we see a flood of extremely expensive stamps in 2012.