? August 2022 - It seems almost impossible to believe that Royal Mail, always keen to please and always keen to make money, will not issue some stamps to commemorate this evening’s victory by the England women’s football team in the Women’s European Championships final held at Wembley Stadium which is the first international football championship victory by an English team since 1966. Then England’s men  beat Germany 4-2 in extra time, this time the English women won 2-1 in extra time. Same ratio!

If Royal Mail does not release one of its four stamp sporting victory miniature sheets at lightning speed then my amazement will know no bounds. Though they might just stick to issuing stamps commemorating American comics and paint a postbox, this time it seems impossible for Royal Mail to risk the public ire which would be incurred if it is does not commemorate England’s women’s notable victory. 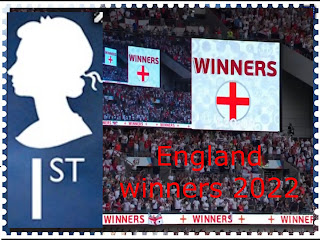