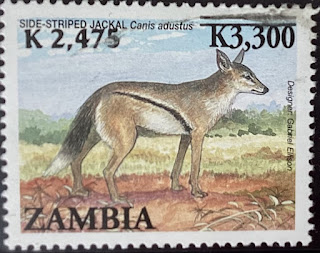 Since mentioning the Zambia Post surcharges in Blog 2122 Steven Zirinsky who is offering these items for sale on his internet shop site has made a comment on Stampboards saying, “As for Zambia, these are not 2022 issues. They were issued in 2016. Zambia has not issued anything since. And mail does get through. Takes four weeks”.

Robert, to whom many thanks, has also kindly left a very helpful comment on a recent edition of this Blog on the subject of these surcharges and I reproduce it here to draw readers’ attention to it:- 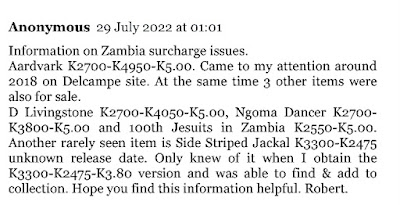 I think in his comment, Robert probably means ‘Aardwolf’ rather than ‘Aardvark’ as I can not find, quite surprisingly, any Zambian stamps in my collection featuring an aardvark and, if so, the stamp he mentions has recently been offered by Steven Zirinsky. The others he mentions are illustrated above and below:- 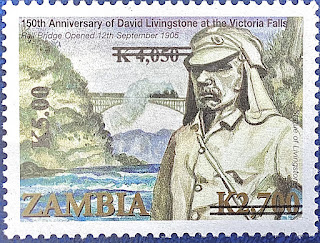 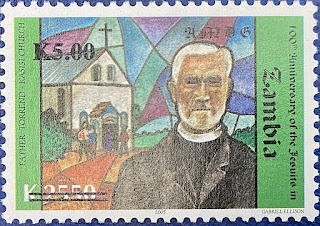 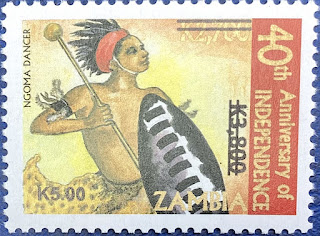 Thank you again for the input. It is always so helpful to receive information particularly on issues such as these surcharges which are the workhorses of the philatelic world in a number of Commonwealth countries. Such issues may become more common - and often not be announced to the philatelic world - as the full effects of the current financial problems affecting the world become apparent and postal services can not afford to pay for the printing of postage stamps. It will be interesting to see what happens in Sri Lanka, whose economy is so blighted that the situation has brought down the country’s president, as regards the future of its postal service and the issue of new stamps. Even the ‘big hitters’ - Royal Mail, Australia Post and so on - may see a big fall in their sales of philatelic items and collectables to the point where they are no longer worth producing as more and more people decide it’s more important to be able to heat their homes this coming winter than it is to possess an expensive ‘Collectors sheet’ depicting comic book characters.

The truth is that postage stamps are no longer needed to any great extent as letter writing gives way to the sending of the cheaper, faster, easier E-mail and if they are mainly produced for stamp collectors or collectible hoarders who can no longer afford them or have greater priorities such as the price of basic necessities then we may see many other postal administrations go the way that Steven Zirinsky tells us that Zambia has taken and go years without a new stamp issue or perhaps never ever issue one again.

Take for instance this fascinating cover I received yesterday from Pakistan. It is a small package which contained a modest number of new stamps. Firstly, there are no postage stamps used on it but there is an interesting bar coded label inscribed PAKISTAN POST which I assume to be related to the packet’s registration. And secondly (though this digresses from the subject) there is some lovely tape inscribed ‘Home Office and ‘Border Force’ applied at one end where customs officials must have opened the packet to ensure there were no dubious items therein as well, I guess, to ascertain the true value of the contents. While I am basically a  stamp collector I am always delighted to add a few interesting covers to my collection if they contribute to telling the story of a country’s postal services.

24 August 2022 - 175th anniversary of the Alderney breakwater - 4 stamps and 1 miniature sheet containing all 4 stamps. The miniature sheet of the previously reported issue (see Blog 2118) is now illustrated below. Rating:- ****. 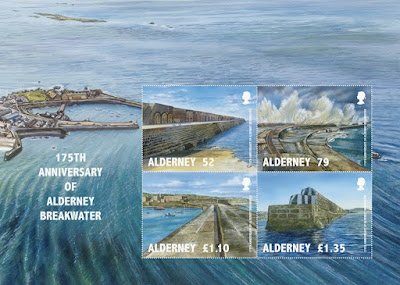 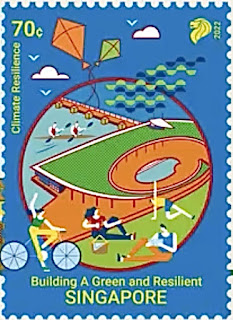