🇲🇺 Mauritius Post is planning to release the following new issues during 2021:-

September - 50th anniversary of the inauguration of the Ferney Hydroelectric power station - 1 stamp.

October - Birth centenary of Sir Edouard Lim Fat who played an important role in the establishment of the Export Processing Zone in Mauritius - 1 stamp.

🇸🇬 In Blog 1872 I mentioned a miniature sheet from Singapore Post which contained 2 tête-beche pairs of the 2020 Year of The Rat stamps and it now appears that a similar item but for The Year of The Ox has also been issued as depicted below, I assume that the item was released on 8 January 2021 along with all the other 2021 Chinese New Year philatelic products. 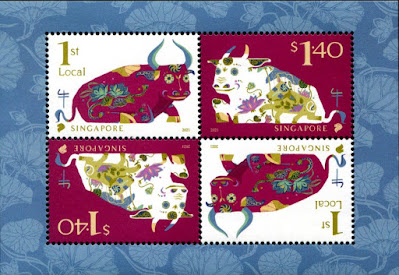 🇬🇧 The Postal Museum in London will reopen on 20 May 2021 and its Post and Go vending machine will be dispensing Machin Head design strips of 1st Class rate and 2nd Class rate stamps with new inscriptions which read “Wish You Were Here” with an additional postcard symbol to commemorate the museum’s new exhibition which notes the 151st anniversary of the first British postcard. Illustrations are awaited.

🇬🇧 The theme of gastronomy and food has made a fairly regular appearance on stamps in recent years but it is unusual to find the reverse - the illustration of stamps on food. However in a recent BBC television programme, The Great British Menu - a competition between established British chefs to provide dishes for a sumptuous banquet based on a given theme (a sort of gastronomic thematic collection which one eats rather than preserves in an an album) - this year’s theme being British Innovators, one enterprising young chef, Elly Wentworth, chose to celebrate Rowland Hill’s invention of the postage stamp as the subject of her dessert course. And what a triumph it was - she received from the food critic judges a perfect score of 10 out of 10 but unfortunately her dish did not make it to the final banquet because the dishes she produced for the other courses were less well received. She also revealed that as a child she had been a stamp collector (though was no more, sadly, and the presenter of the programme, Andi Oliver said that she too had collected stamps at a younger age but no longer did so - a story we all hear much too often) but it was still pleasing to see stamp collecting getting a mention under unusual circumstances, perhaps there’s life in the old dog yet.

The dessert itself was a layered chocolate marquise with an edible Penny Black chocolate on top and with a banana sesame sorbet and banana sesame sandwich and it was served alongside a post box which when opened contained a letter to the diner informing them about the invention of the postage stamp. It all looked too good to eat but clearly was a triumph. 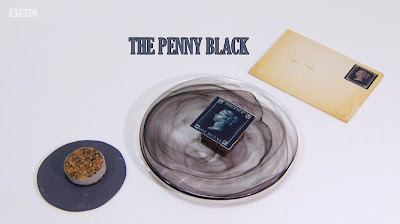 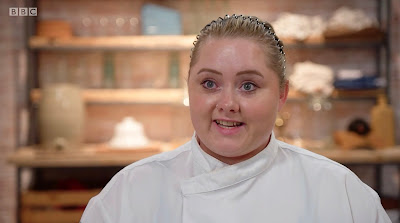 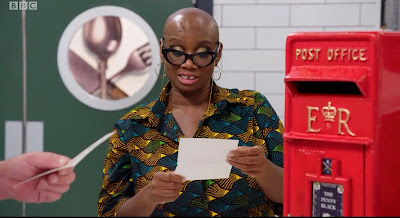 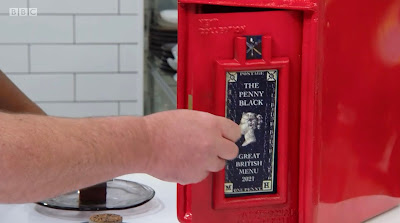 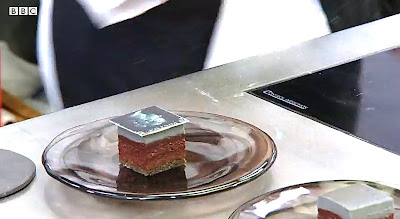