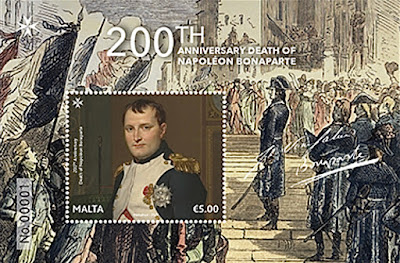 🇲🇹 MaltaPost will issue a single miniature sheet on 5 May 2021 to commemorate the Bicentenary of the death of the French tyrant Bonaparte who invaded and occupied Malta in June 1798.

On 9 June 1798, a huge French fleet on way to attack Egypt arrived off Valletta and demanded that the entire convoy be allowed to enter the harbour to take on supplies but the Grandmaster of the Order of St John which ruled the island, Ferdinand von Hompesch zu Bolheim refused to allow more than two ships into the harbour to protect Malta’s neutrality in the war between Bonaparte and Great Britain. In response Bonaparte ordered his fleet to bombard Valletta and on 11 June several thousand French troops were landed on the island at seven key strategic sites. The knights of the Order of St John failed to mount an effective resistance to the invasion although 2000 valiant Maltese native militia resisted the French, falling back to Valletta after the fall of Mdina. Leaving the people of Malta to their fate, von Hompesch negotiated a surrender to Bonaparte agreeing to turn the island and all its resources over to the French while at the same time obtaining estates and pensions for himself and the rest of his knights in France. Hence the rule of the Knights of St John in Malta came to an end with its leaders richly rewarded by the invaders.

Bonaparte established a garrison of 4000 troops on the island and set off with his fleet for Alexandria on 19 June. The French set about taking over the properties of the Order of St John and the property of the Roman Catholic Church in the island swiftly moving to looting churches. For the devout Maltese this was all too much. During an auction of looted church property on 2 September 1798 an uprising began against the French and within days thousands of Maltese irregulars had driven the French garrison into Valletta and and the harbour area. Ten thousand Maltese irregular soldiers led by Emmanuale Vitale and Francesco Saverio Caruana surrounded Valletta but the fortifications were too strong to enable them to gain entrance. The Maltese built siege fortifications around the city to bombard the French and invited the British to help them remove the occupiers. Captain Alexander Ball was appointed Civil Commissioner in 1799 and the French were finally forced to surrender to the British on 5 September 1800. The defeated French were transported back to Toulon on board British ships and the island became a British protectorate.The British and their allies in Europe finally defeated Bonaparte in 1815 and exiled him to the British island of St Helena where he died on 5 May 1821 (the St Helena postal service is also releasing a set of 4 stamps and 1 miniature sheet on 5 May to commemorate the anniversary of the death of the tyrant who had caused huge amounts of death and suffering throughout Europe and further afield for almost twenty years - see Blog 1824).

The new miniature sheet was designed by MaltaPost and was lithographed and is perforated 14.

The events of 1798 were commemorated on their bicentenary by two sets of stamps issued by MaltaPost. The first noted the 200th anniversary of the landing of Bonaparte’s occupying forces and was released on 28 March 1998 and the four stamps featured the treacherous von Hompesch, the departure of the Knights Of Malta, the landing of the French and a rather worried-looking Bonaparte looking rather slimmer than he would be when middle age engulfed him as seen in later portraits of him. 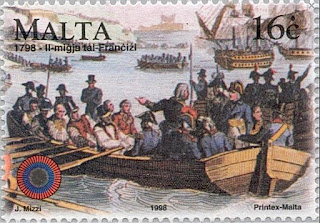 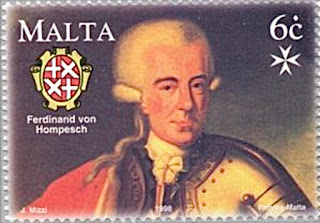 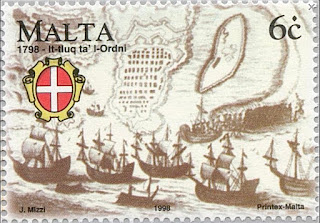 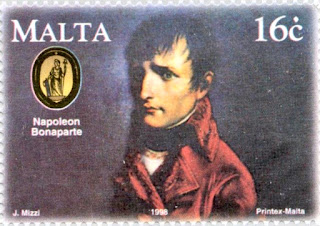 A second set, this time made up of three stamps, was issued on 6 October 1998 to commemorate the bicentenary of the Maltese people’s uprising against Bonaparte’s occupying forces leading to their eventual expulsion. The stamps depict a detail from a commemorative statue, the defeated French commander Belgrand de Vaubois and the British Civil Commissioner who led the British support for the Maltese people’s liberation of their island, Captain Alexander Ball. All three issues combine to make an interesting mini-collection telling the story of this interesting period in Maltese history. 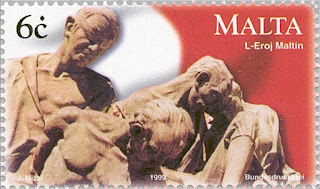 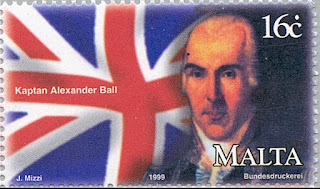 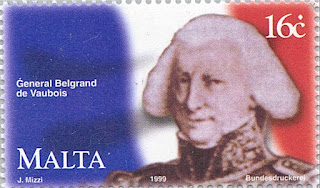