The number of products that IGPC is putting out that clearly originate from its Beijing office continues to increase and these products are frequently quite bizarre when put in the context of the countries whose names appear on these items. You really have to ask why countries like Grenada and Guyana should have stamps with a lot of Mandarin inscriptions incorporated in their design. I doubt that many people in the 2 territories are fluent in Mandarin to the extent that they benefit from having the language inscribed on their postage stamps.
The latest such products from these territories commemorate the 20th anniversary of the return of the former British colony of Hong Kong to Chinese sovereignty and are clearly produced for sale to stamp collectors in China and not to letter writing members of the Grenadian and Guyanese public. I don't expect that the issues featured below will find themselves a place in the main listing of Stanley Gibbons Catalogue or, for that matter, find themselves being sold over ordinary post office counters for use on ordinary mail. Interestingly, though, the face values are not particularly high and are consistent with local postal rates so, who knows?, Grenadans and Guyanese may well be using them on their mail as I write this.
🇬🇩 Grenada - 9 May 2017 - 20th anniversary of the return of Hong Kong to sovereignty of The Chinese People's Republic - 8 different stamps. Rating:- 0. 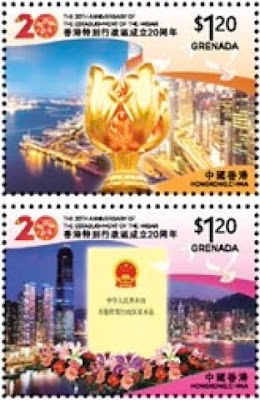 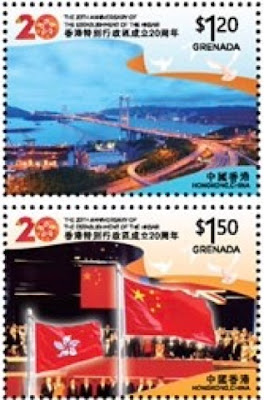 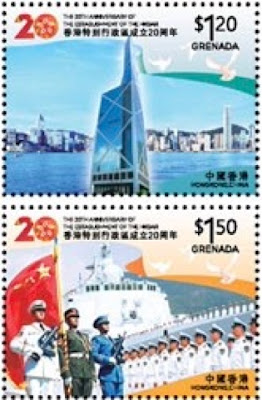 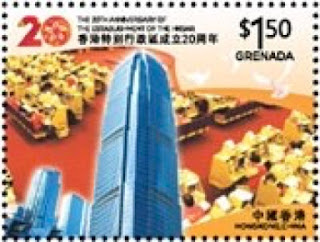 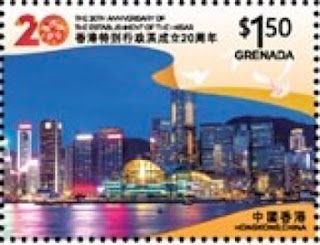 🇬🇾 Guyana - 5 May 2017 - 20th anniversary of the return of Hong Kong to sovereignty of The Chinese People's Republic - 10 different stamps. Rating:- 0. 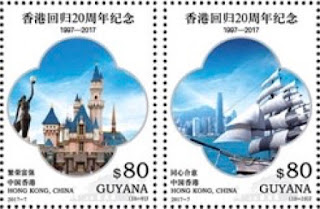 You ask yourself, as reviled as IGPC is among many collectors, how does it keep going in these modern times? Three answers are:- 1. Producing items that appeal to the large Chinese market as above. 2. Producing and selling stamps with extremely high face values as in Blog 992 - you don't have to sell a lot to make a profit. 3. Cashing in on celebrities particularly by cynically exploiting the memories of those popular figures who died tragically such as Diana Princess Of Wales and President John Kennedy:- 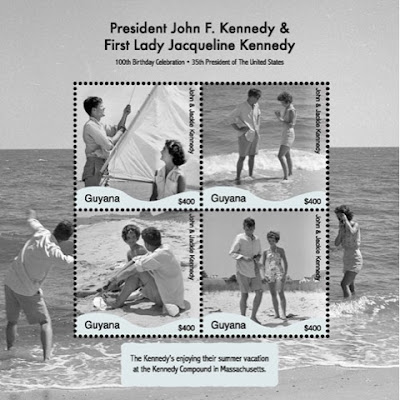 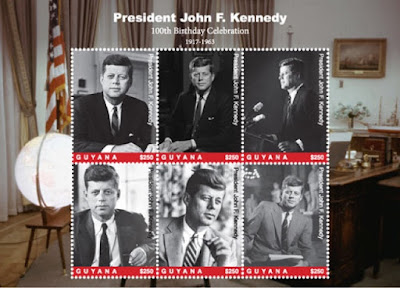 WOPA seems once more to be dealing with the stamps of Maldives and states that "WOPA is proud to be able to offer the Maldives stamps direct from Maldives Post on its site".

🇲🇻 It would appear that WOPA has finished its assessment of issues inscribed "Maldives" and is content that as the Maldives Post website has a page which lists these issues for sale (all from 2015 and 2016 and all typical Stamperija products) collectors will feel that they are justified in doing so. I offer no further comment. It will be interesting to see if the Maldives Post website philatelic page lists the locally produced stamps that seem to be actually sold for use on the mail in the islands. 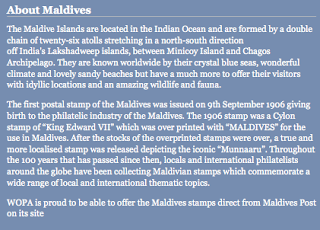 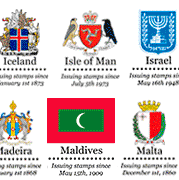 It will also be interesting to see if WOPA takes on the likes of Solomon Islands, Sierra Leone and Mozambique in the future.