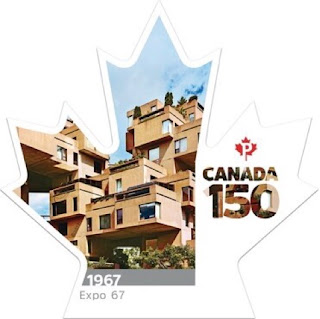 🇨🇦 Canada Post launched the first of the 10 maple leaf-shaped stamps that it will issue on 1 June 2017 to commemorate the 150th anniversary of the British  North America Act which brought Canada into existence. The subject of the stamp is "Expo'67" which was held in Montreal and the design depicts Habitat 67, a futuristic modular housing complex designed by the architect Moshe Safdie who was present in Montreal for the launch of the stamp.
I can see the point of the subject matter but in truth a picture of 1960s-chic apartments is hardly the most exciting prospect to start this series off. I hope that things improve with the remaining 9 designs. Rating:- **.

🇲🇹 Malta Post will issue a pair of stamps on 9 May 2017 on the subject of Catles of Malta as its contribution to this year's Europa omnibus series. The stamps were designed by Cedric Galea Pirotta and lithographed by Printex and perforated 14. Rating:- ****. 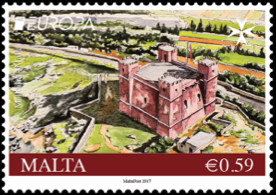 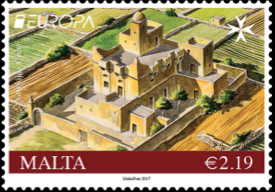 🇬🇧 The latest Royal Mail Post and Go stamps were introduced at the Shakespeare Birthplace Trust gift shop in Stratford upon Avon on 1 May 2017. Strips of 6 all in the same value are being sold and the stamps take the form of the Birthplace Trust logo as previously used on the Machin Head and Union Jack stamps inscribed on the 6 Symbolic Flowers stamps which have been reprinted digitally with code MA17. The Union Jack stamps with the Shakespeare centre logo were withdrawn on the introduction of the new labels. These are pretty stamps and the logo fits quite nicely on them and as they represent a new printing of the Flowers stamps are quite interesting. Rating:- ***. 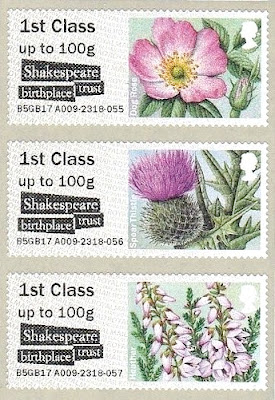 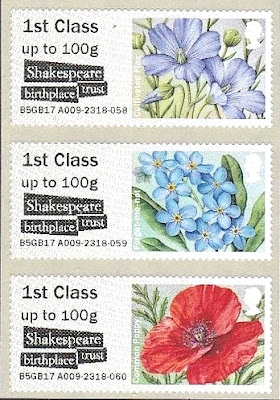 🇮🇳 India Post issued a single stamp on 1 May 2017 to commemorate the 1000th anniversary of the Birth of Sri Ramanujacharya in Tamil Nadu. Ramanujacharya was a Hindu theologian and philosopher. Rating:- **. 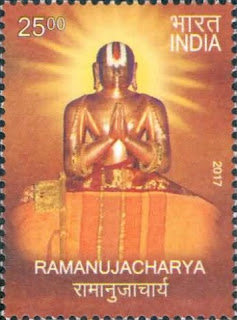