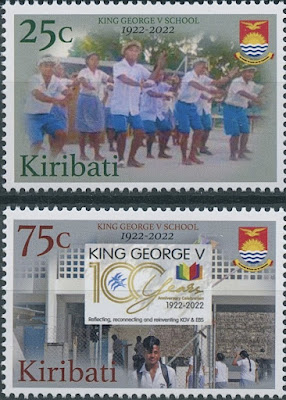 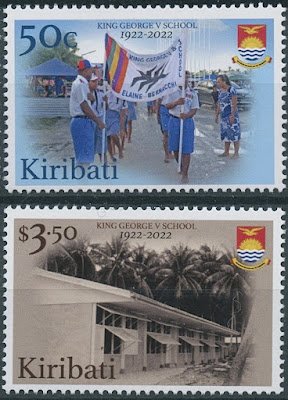 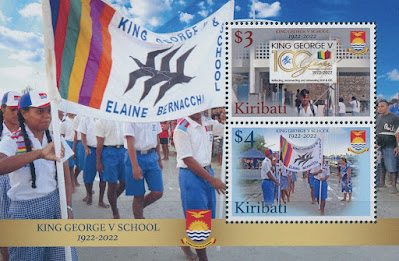 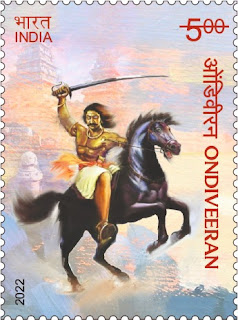 11 April 2021 - Centenary of the Jordanian State, firstly as the Amirate of Jordan, a British Mandate and later as the Hashemite Kingdom of Jordan - 10 stamps and 1 miniature sheet.

Although I do not normally include the new issues of Jordan here this is a set of importance and interest when relating the history of the British Empire and then The Commonwealth. Most people think of Queen Victoria’s Diamond Jubilee as being the absolute apogee of British imperialism and yet the Empire had not reached its greatest extent because the Allies’ defeat of the Germans and Turks in the First World War was to see the British in a scramble with the French to take over the previous colonies of the extinguished German and Ottoman Empires.

The scramble in the Middle East saw the two rivals agree to carve up the old Turkish Empire between them and the Sykes-Picot agreement of 1916 drew the boundaries of their new territories - the French would take Syria and Lebanon while the British were allocated Transjordan, Southern Iraq and Palestine. Earlier, in 1915, the British had been in contact with Hussein bin Ali, the Sharif of Mecca, agreeing to recognise Arab independence following an Arab revolt against the Ottomans.

Assisted by Captain TE Lawrence, Hussein forced the Ottoman military to withdraw from Aqaba in 1917 and the British and their Arab allies were able to take over Palestine, Transjordan and Iraq by 1918. The French took control of Syria and Lebanon according to the Sykes-Picot Agreement and installed Faisal, third son of Hussein,  as King of Syria with the territory being established as a French League of Nations Mandate which led to a war between Faisal’s forces and the French. The victorious French deposed Faisal and the British subsequently established him as King of Iraq.

Meanwhile Transjordan became part of the British Mandate of Palestine; the area west of the river  Jordan was governed as part of Palestine while the part east of the Jordan was administered separately as Transjordan but in November 1920 Abdullah, Faisal’s brother, arrived and occupied most of the territory. Abdullah established his government as Amir on 11 April 1921, which this issue commemorates.

Abdullah was acknowledged as Amir of Transjordan until 25 May 1946 when, with the pending ending of the British Mandate, he became King of the Hashemite Kingdom of Transjordan; the Mandate being terminated on 17 June 1946. The country’s name was changed to the Hashemite Kingdom of Jordan in 1949 and Abdullah continued to rule it until his assassination by a Palestinian at the Al-Aqua Mosque in Jerusalem on 20 July 1951. During Abdullah’s reign, and under subsequent monarchs, Jordan continued to maintain close relations with the United Kingdom. 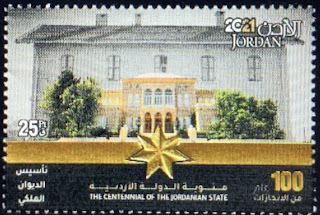 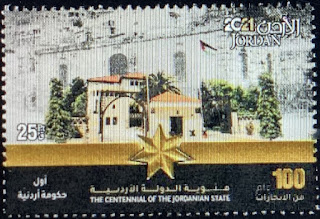 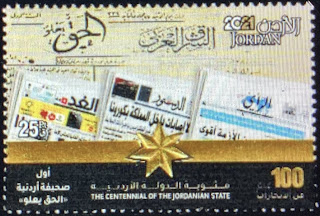 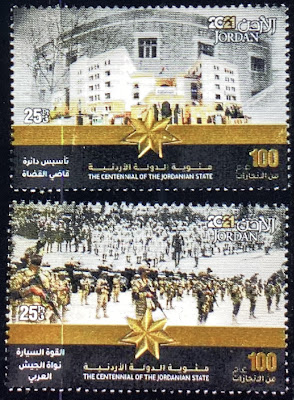 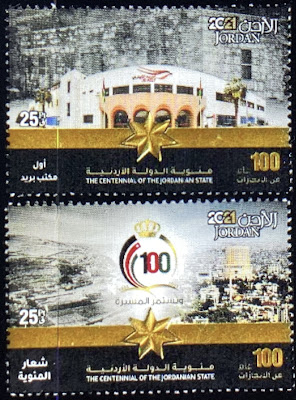 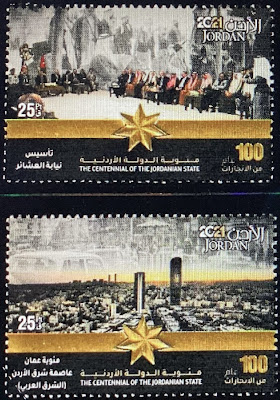 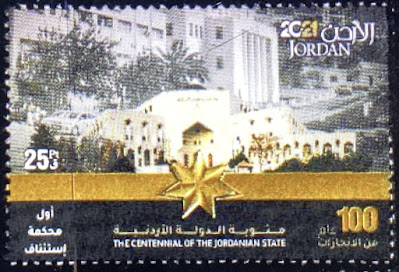 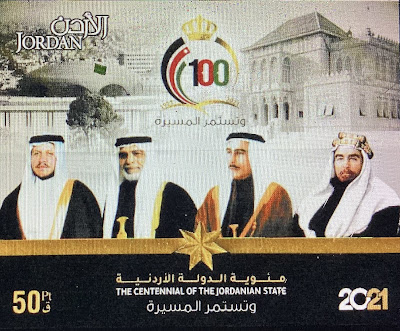 26 October 2021 - Centenary of the first Jordanian postage stamps (which were inscribed EEF - Egyptian Expeditionary Force - and overprinted in Arabic and first issued in November 1920) - 1 miniature sheet. 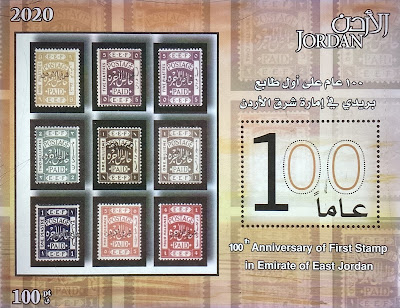