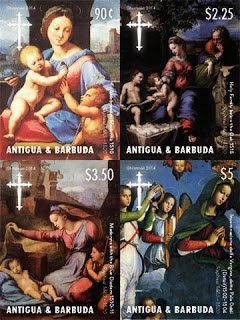 The next issue was a sheetlet of 3 different stamps and an accompanying miniature sheet on the subject of "Rare stamps" which is said to have been issued on 2 January 2015. Strangely none of the stamps in the issue features a stamp from Antigua although the island has some some rare stamps which could have been depicted:- 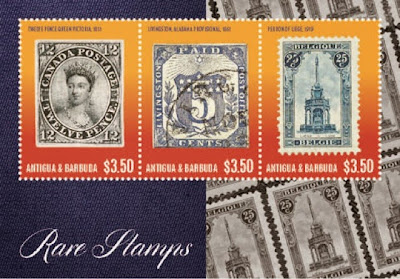 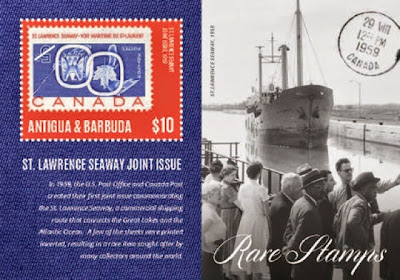 The Antigua And Barbuda sheetlet of 4 stamps and 1 miniature sheet on the subject of the Year of The Ram which was illustrated in Blog 517 also has a stated date of issue of 2 January 2015. It is difficult to think that the lunar new year is widely celebrated in Antigua And Barbuda.

Royal Mail will issue 10 x 1st class stamps on 5 March 2015 on the subject of Bridges of Britain and Northern Ireland. Most of the featured designs seem to depict bridges in the north of England for some  reason with nothing in the set to represent the English Midlands or East Anglia or London, though given that London is the subject of far too many British stamp issues it is a relief to find that it has been ignored for once (we of course did have a set of 5 stamps which depicted bridges of London in 2002). The designs feature 2 bridges of south-west England (Pulteney Bridge in Bath and the prehistoric Tarr Steps in Exmoor which was also shown on a stamp of 1968), the Londonderry Peace Bridge in Northern Ireland, the Craigellachie Bridge in Moray in Scotland, the Menai Straits Bridge in Wales (previously depicted in the 1968 Bridges set) and - in the north of England - the Humber Bridge (previously depicted philatelically in 1983), the Middlesborough Transporter Bridge, the Packhorse Bridge at Wasdale Head in Cumbria, the Royal Border Bridge in Northumberland and the Newcastle High Level Bridge.
Royal Mail seems to have a fascination with bridges in north-east England since the Tyne Bridge was included in the "UK A - Z" set issued on 10 April 2012. Bath has also been somewhat philatelically over-exposed since the same set included the Bath Roman Baths which were also featured in the "Body and Bone" Millenium set issued on 3 October 2000. 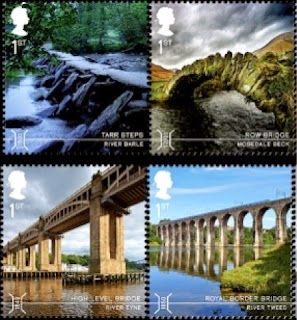 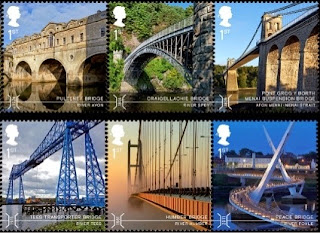 A remarkably large number of stamps featuring bridges has been issued in Britain since a pair of stamps was released in 1964 to commemorate the completion of the Forth Road Bridge. As mentioned above a number of bridges have appeared on more than one stamp - I suppose this repetition of subjects is inevitable when one considers how the British Post Office/Royal Mail has flooded the philatelic market with increasing numbers of stamps in recent years.
Below are the British stamps which have depicted bridges since 1964:-
The original Tarr Steps and Menai Bridge stamps issued in 1968 as mentioned above:- 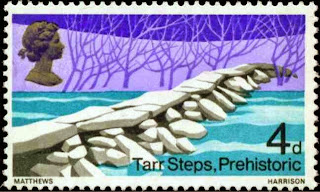 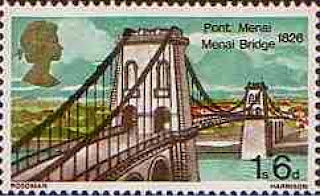 The bridges of London set of 5 stamps mentioned above which was released in 2002:- 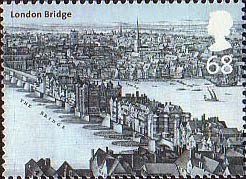 The Tyne Bridge stamp of 2012 as mentioned above:- 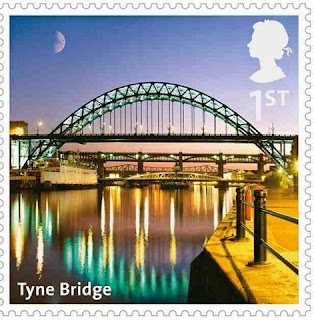 The first British stamps to depict a bridge - The Forth Road Bridge - issued in 1964:- 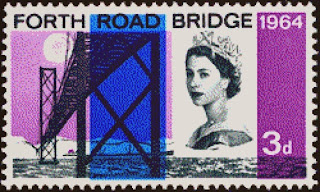 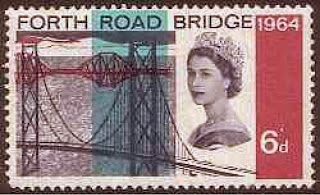 The remaining 2 values of the 1968 Bridges set depicting the Aberfeldy Bridge in Scotland and the M4 Viaduct:- 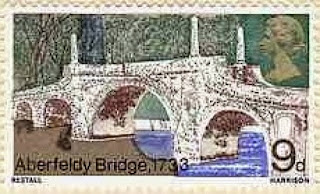 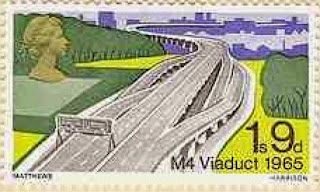 One of 3 stamps issued in 1971 to commemorate the 50th anniversary of the Northern Ireland Parliament showing a painting of an Ulster country road running across a small rural bridge:- 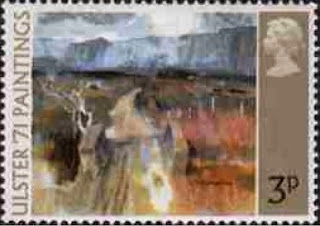 The 50p stamp and miniature sheet issued in 1980 to commemorate the "London 1980" Philatelic Exhibition included Tower Bridge in its design:- 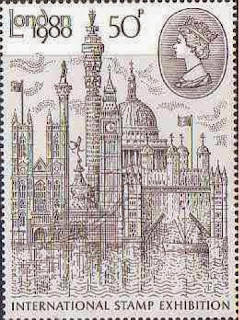 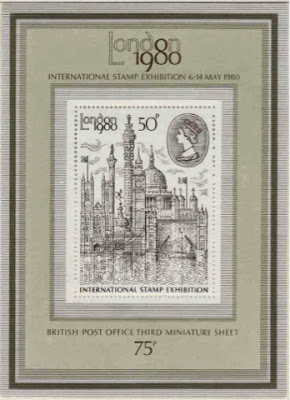 The cover of a "Prestige Booklet" of 1983 titled "The Scots Connection" depicted the Forth Railway Bridge:- 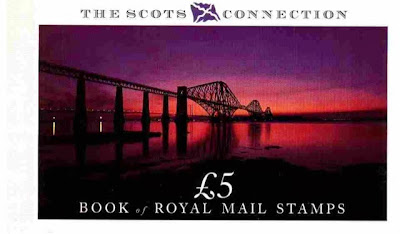 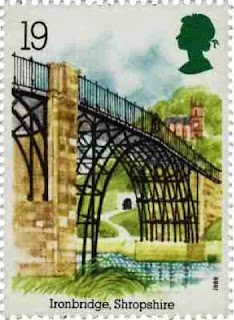 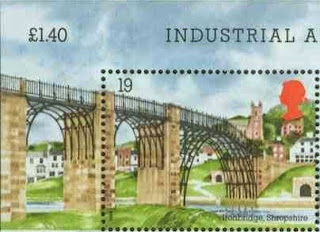 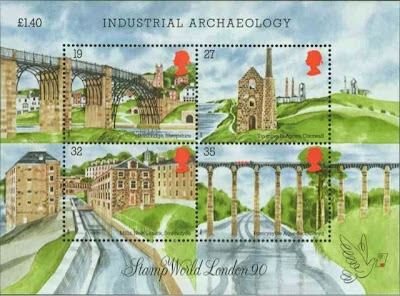 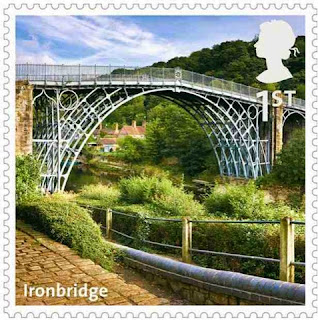 A photograph of a bridge over the Birmingham to Worcester canal was featured on a stamp issued in 1994 which was part of a set of five titled "Age of Steam":-

The Gateshead Millenium Bridge was depicted on 1 value of the 6th Millenium Projects (People and Places) issue of 2000:-

Glenfinnan Viaduct at Lochabar in Scotland was depicted on one of the 6 stamps of the "British Journey set of 2003:- 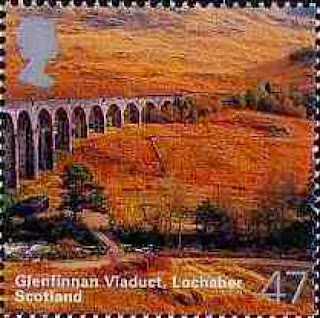 A number of bridges were shown on the stamps and in the "Prestige Booklet" issued in 2006 to commemorate the birth bicentenary of Isambard Kingdom Brunel, the great Victorian engineer. The bridge designs were the Royal Albert Bridge at Saltash, the Clifton Suspension Bridge in Bristol, the Maidenhead Bridge and these designs were also incorporated in the miniature sheet. The booklet cover depicted another view of the Clifton Supension Bridge and the borders of 2 of the booklet panes depicted photographs of the Treviddo Viaduct in Cornwall and the Royal Albert (Saltash) Railway Bridge respectively:- 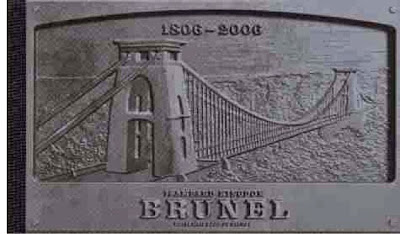 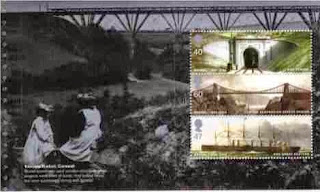 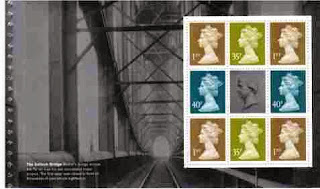 A cartoon of Brunel considering the construction of bridges appeared on one of the 6 self-adhesive "World of Invention" stamps issued in 2007. Gummed versions of the stamp also appeared in the accompanying miniature sheet and on 2 panes of the accompanying "Prestige booklet":- 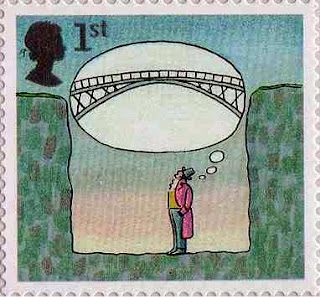 One stamp from the set of eight which was issued on 10 March 2009 on the subject of "Figures of the Industrial Revolution" depicted a bridge carrying a canal across a river to commemorate James Brindley:- 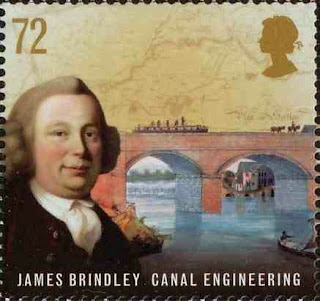 The Forth Railway Bridge made yet another appearance on one of the "UK A - Z" stamps issued on 13 October 2011:- 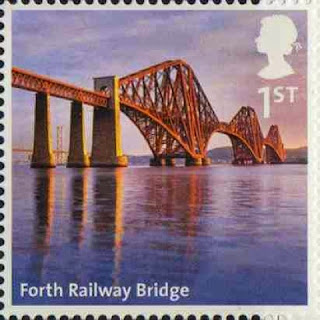 Finally yet another bridge in London made an appearance on one of the 10 stamps of the "Britons of Distinction" set which was issued in 2013. The bridge depicted is Westminster Bridge (previously featured on a stamp in 2002) and it provides a background to a portrait of the former prime minister Lloyd George:- 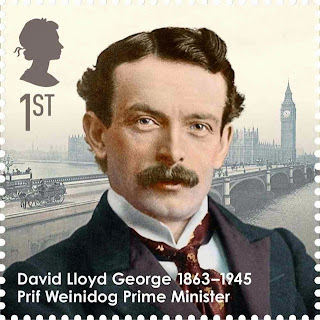 Until I began to look through my albums when I saw the details of the new set I had forgotten that so many British stamps had featured the subject of bridges and one really has to wonder why Royal Mail felt it necessary to issue another 10 stamps on the subject at this time especially when several stamps from the latest set depict bridges which have previously appeared on British stamps. I also wonder about the regional distribution of many of the featured bridges. Interestingly the important Severn Bridge which spans the River Severn carrying the road from England to Wales has never found its way on to a British stamp and that seems like a notable omission when one considers how many duplications there have been. I had intended to include the stamps issued by Universal Mail United Kingdom in this review but there were so many Royal Mail stamps to rediscover that I felt too worn out by the exercise to go down that road.
Finally it is worth mentioning the allegorical bridge which was depicted on 2 of the four Europa stamps which were issued in 1984:- 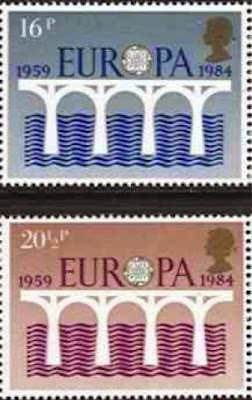