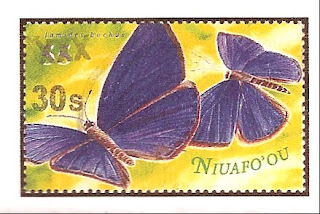 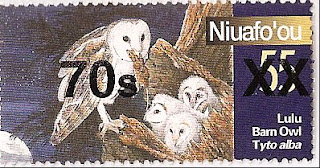 I was quite surprised to receive a phone call in the latter part of last week from Steve Zirinsky, the New York dealer, wanting to let me know that he had received some more surcharged stamps from Tonga. He informs me that two were issued as recently as May 2010 and consist of the Niuafo'ou WWF Lorikeet 55s value originally issued in 1998 and hand-surcharged in July 2008 with a 30s value, now surcharged with 70s and the other is the 55s value of the Niuafo'ou Barn Owl set also surcharged 70s. A month later in June 2010 a further surcharge was produced - this time it was the 55s value of the 2001 Tongan dance set again surcharged 70s. One assumes this 70s value represents a new postal rate and that it came into being in May and, as often before, there were insufficient stamps available at the post office for the new rate. Judging by the prices of these items the owl stamp ($300) is considerably rarer than the others, the dancers costing $50 and the lorikeet $40. I was also surprised to see on the scan that Steve Zirinsky sent me that another unpriced hand-stamped value from July 2008 had surfaced - a Niuafo'ou 33s butterfly stamp surcharged 30s. It is important to note that two of the latest stamps feature designs of birds (and also one is a WWF stamp) - of immense interest to collectors of bird thematics and the 2008 butterfly stamp is relevant to collectors of that equally popular theme. As I have said before, these are real postage stamps not tedious collectables from greedy agencies.
The illustrations depict the 2008 butterfly stamp surcharge, the 2010 owl painfully rare stamp and the group of 3 surcharges issued in May & June 2010.
Posted by White Knight at 08:51