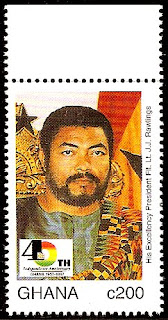 In the last few days I have managed to obtain a stamp for which I have been searching for twelve years or so - the c200 value of the set from Ghana which celebrated the 40th anniversary of the country's independence. This famously featured the portrait of the then president, Flight Lieutenant Jerry Rawlings, who decided it was not appropriate for his portrait to appear on Ghana's postage stamps and so the stamp was withdrawn from circulation. Having been issued on 6 March 1997 it ceased to be available on 22nd April 1997 and the short period of sale resulted in it becoming instantly rare and not generally included in stamp dealers' new issue distributions and so missing from many collections. I recently found it being offered for sale on the Delcampe auction web site and dashed to buy it. Another rare piece of modern philately secured!
Unfortunately Ghana continues to be problematical. One set I have not yet seen offered by any dealer and overlooked by Gibbons in their West Africa catalogue is a set from - I think - 2005 commemorating "Panfest '05" which I believe was the Pan-African Historical Theatre Festival. At least five stamps were included in the set although I have only managed to obtain four of them in used condition so far. They are illustrated above. The stamps have clearly been available for everyday usage, so why they have not received a philatelic distribution is mystery to me.
Right now, the problem area for me is attempting to obtain all the values of the definitive set of small designs which has been running from 1995 to 2007 and on top of that it is difficult to know how many stamps, some definitives and some commemoratives, have been surcharged in different formats to address the change of currency which has occurred in the last couple of years or so. So far I have seven different stamps (illustrated above) and I have at least one more on its way to me from a seller in Ghana. As I say, just how many of them there are in total will no doubt become apparent eventually.
In the last two or three years, Ghana has concentrated on issuing stamps of pure local interest (apart from a couple which I think originated with the Chinese commemorating the Beijing Olympics and the Peony Festival in China - see previous blog on the subject of philatelic imperialism) and the flood of poorly researched and designed stamps from New York seems to have been assuaged. I enjoy the struggle to track down Ghana's real stamps and abhor the abuse of Ghana's national reputation represented by countless issues featuring American pop stars and baseball players. Let us hope that we have now finally seen the back of all the expensive garbage that has appeared over the years and that Ghana is now getting on with issuing stamps to be used on its mail that reflect the various aspects of Ghanaian life, culture, wildlife, scenery and so on.
Posted by White Knight at 08:34