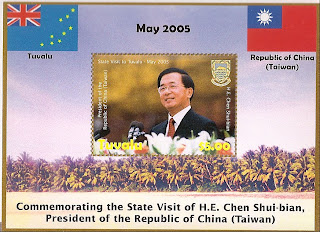 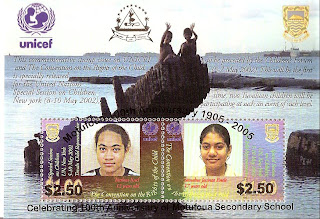 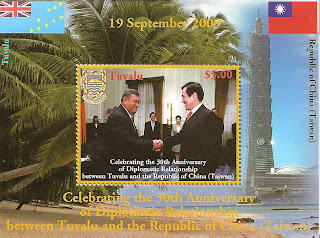 Another very satisfying outcome for me of my recent visit to the Stafford stamp fair was stumbling upon a dealer by chance whom I discovered to be selling two miniature sheets from Tuvalu which I have been looking for to add to my collection for several years.  I was not aware of these two items which were originally released in 2005 until they first appeared in the catalogue column of Gibbons Stamp Monthly during the course of 2007. Until my visit to Stafford I had never seen the sheets offered for sale by any dealer nor had I noticed them for sale on E Bay. I had presumed that I would never find them and did not even leave a space in my collection for them. They are not any of the run of the mill, locally irrelevant issues being produced in Tuvalu's name by the New York philatelic agency but one is part of an infrequent series of issues which I suppose must be produced by the government of Taiwan to emphasise its diplomatic links with Tuvalu and the other could be a locally produced overprint on a previously issued miniature sheet.
The Taiwan related issue was released on 5 May 2005 and commemorated the state visit of President Chen Shui-bian to Tuvalu and was in a similar format to a sheet issued the previous year to commemorate the 25th anniversary of Taiwan-Tuvalu diplomatic relations. The second sheet I had been hunting down was released on 10 July 2005 to commemorate the centenary of Motofua Secondary School and consisted of overprints and $2.50 surcharges on the two stamps contained in a miniature sheet which was originally issued on 8 May 2002 and which had commemorated the attendance by two Tuvaluan children at the United Nations Children's Forum in New York. A locally pertinent issue had been made on 9 March 2001 which marked the first anniversary of the death of 18 girls in a fire tragedy in a dormitory of Motofua Secondary School and this must have been a terribly traumatic event for the people of such a small nation as Tuvalu. Given the recent nature of the tragedy it is not surprising that the little nation wished to philatelically commemorate a more joyous event for the school - its centenary.
The Taiwan related issues are interesting in themselves. Such items can be found from a number of small Commonwealth territories where either The People's Republic Of China or Taiwan have managed to gain influence with the governments of the small and/or impoverished states and the various stamp issues represent a sort of philatelic diplomatic war between the two rival Chinese states. From time to time the Japanese also manage to get some of these countries to issue stamps to show how the territories have been aided by them but all this fades into insignificance when you think about the United States' philatelic neo-imperialism represented by the huge outpouring of issues by a New York agency with the names of 20 or so Commonwealth states inscribed on them, which are mostly dedicated to depicting contemporary United States culture and aspects of American history which clearly have no relevance to the country whose name appears on the "stamps". Tuvalu is, alas, one of the victims of this latter category of philatelic imperialism but if such issues are treated with the contempt they deserve, then an interesting little collection of new issues can be made that still represent this tiny little island nation in The Pacific Ocean.
Another Taiwan related issue has appeared recently - on 19 September 2009, another miniature in the usual format was released to commemorate the thirtieth anniversary of Taiwan- Tuvalu diplomatic relations. I illustrate this item and the two 2005 issues above.
Posted by White Knight at 02:30